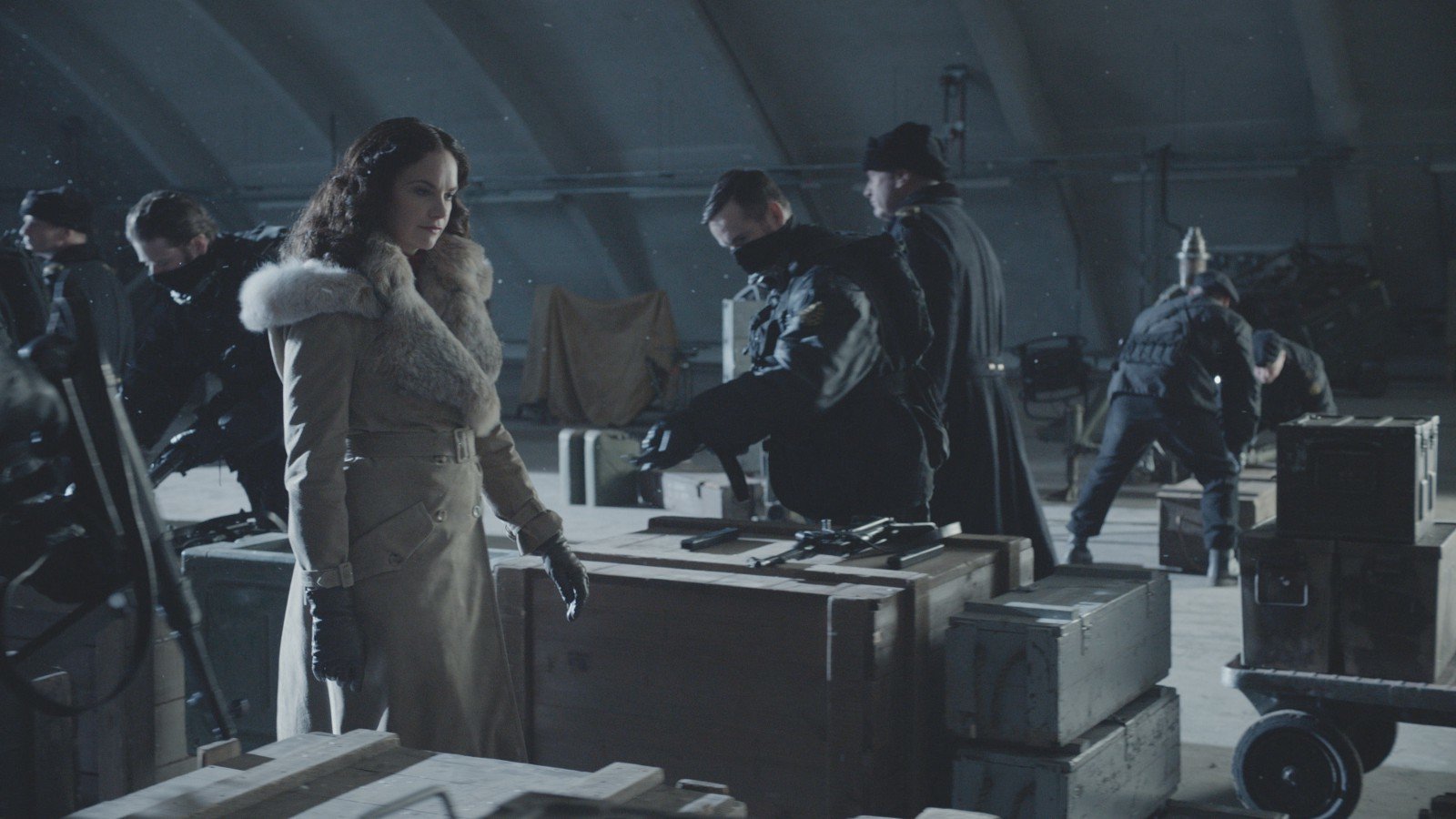 HBO tackles another epic fantasy series with “His Dark Materials” (TV-14), adapted from the young adult trilogy by Philip Pullman. Ruth Wilson and James McAvoy star with Dafne Keen (the young costar of “Logan”), who plays an orphan in a quasi-steampunk world of talking spirit animals and magic dust. This show is more family oriented than “Game of Thrones” but still has a twist of darkness to it, as well as a strain of religious skepticism. New episodes each Monday night on all HBO platforms. A second season is already in production.

“Green Eggs and Ham” (TV-G) turns the Dr. Seuss storybook into an animated series about two opposites on a road trip to save endangered species… and try new things, despite the resistance of Guy (Michael Douglas) to the enthusiasm of Sam I Am (Adam Devine). Also features the voices of Diane Keaton, Eddie Izzard, and Jillian Bell; Keegan-Michael Key narrates. 13 episodes on Netflix.

“Framing John Delorean” (2019, not rated), a mix of documentary and dramatic recreations, stars Alec Baldwin as the maverick automaker whose rise and fall (he was busted for cocaine possession and went bust when his futuristic car failed to sell) became epitome of ambition, greed, and hubris in the 1980s. Streaming on Hulu.

The documentary “One Child Nation” (2019, R) digs into the brutal reality behind the population control law instituted by China and the scars it left behind. On Amazon Prime Video.

Classic pick: in “Rebel Without a Cause” (1955), James Dean became the screen embodiment of the strangled cry of teen alienation in the 1950s. Director Nicholas Ray’s amazing use of widescreen and color create a visual dimension to the explosion of tempestuous emotions, and Dean’s wound up performances and stumbling delivery perfectly captures the flailing desperation of an adolescent searching for a role model. Streaming on Netflix.

Cult pick: Also new to Netflix is “Forbidden Planet” (1956), one of the most sophisticated and fantastical science fiction classics of the 1950s, thanks to a story inspired by Shakespeare’s “The Tempest,” an imaginative alien planetscape in delirious Technicolor hues, and a wonderfully weird electronic soundscape of a score.

Dwayne Johnson and Jason Statham are “Hobbs & Shaw” (2019, PG-13), former enemies who team up to stop a bio-terrorist (Idris Elba), in the spin-off of the “Fast and Furious” action film franchise. Vanessa Kirby and Helen Mirren co-star. Also on DVD and at Redbox. Also new:

Available same day as select theaters nationwide is “Danger Close” (2019, not rated), a Vietnam War drama inspired by the true story of an inexperienced Australian platoon under fire.

The great Chinese filmmaker Zhang Yimou (“Hero”) returns to costume drama and epic action with “Shadow” (China, 2018, no rated, with subtitles), a period thriller of warfare and palace intrigue.

The five-part documentary series “The Devil Next Door” (2019, TV-MA) delves into the story of John Demjanjuk, a Cleveland family man who was exposed in the 1980s as a brutal guard at a Nazi concentration camp and tried for his war crimes.

The nonfiction series “Greatest Events of WWII in HD Colour” (2019, not rated) uses digital colorization to archival footage. Also newly arrived is “Spitfire” (2018, TV-14), which celebrates the British fighter plane that helped with the air war.

“Let It Snow” (2019, not rated) adds a young adult romance to its line-up of Christmas movies.

If “My Name Is Dolemite” has sparked your interest in black action cinema of the seventies, Netflix just added the original “Super Fly” (1972, R), starring Ron O’Neal as a cocaine dealer trying to make one big score, and “Cleopatra Jones” (1973, PG) with Tamara Dobson as a glamorous, globetrotting American agent.

Elizabeth Taylor gave one of her finest performances opposite Paul Newman in “Cat on a Hot Tin Roof” (1958), a somewhat censored by still potent adaptation of the Tennessee Williams play, but finally won her first Oscar for “Butterfield 8” (1960).

More classics: Netflix is (quite rightly) criticized for its paucity of classic film but this month they’ve added quite a few. In addition to those noted above, there’s Stanley Kubrick’s fascinating adaptation of “Lolita” (1962, R) with James Mason and Sue Lyon;

If you’re fed up with sentiment in your holiday films, Billy Bob Thornton is one “Bad Santa” (2003, R) in the raunchy comedy with Bernie Mac and Lauren Graham.

Denzel Washington earned his second Oscar as a bad cop in the crime thriller “Training Day” (2001, R) with Ethan Hawke.

Steve Carell and Paul Rudd are an odd couple buddy team in “Dinner for Schmucks” (2010, PG-13), a remake of the French farce costarring Zach Galifianakis, Jemaine Clement, Lucy Punch and David Walliams as eccentrics on parade (Prime Video and Hulu).

Tom Cruise is a hot young lawyer who discovers his new clients are the mob in “The Firm” (1993, R), adapted from the John Grisham thriller. Jeanne Tripplehorn and Gene Hackman co-star and Holly Hunter earned an Oscar nomination for her supporting performance (Prime Video and Hulu).

Clint Eastwood plots his “Escape From Alcatraz” (1979, PG) in the prison thriller from director Don Siegel (Prime Video and Hulu).

Rachel Weisz plays American historian Deborah E. Lipstadt in “Denial” (2016, PG-13), based on the true story of her landmark legal battle against a Holocaust denier.

The documentary “The Biggest Little Farm” (2018, PG) follows a couple who leave the city to start a sustainable farm.

Also new: “Under the Tuscan Sun” (2003, PG-13), a romantic drama starring Diane Lane is an American divorcee who buys a dilapidated villa in Italy;

The documentary “The Apollo” (2019, not rated) celebrates the 85-year history and legacy of the landmark theater in New York City.

Available Saturday are the adolescent Arthurian adventure “The Kid Who Would Be King” (2019, PG), featuring Patrick Stewart as Merlin trying to teach a group of high school kids, and the special “Sesame Street’s 50th Anniversary Celebration” (2019, not rated).

The first season of “Slings & Arrows” (2003), a delightful Canadian comedy set at a prestigious theater festival, stars Paul Gross as the madman actor who reluctantly becomes the artistic director and Rachel McAdams in an early role as a young actress. Mark McKinney (of “Kids in the Hall”) co-created the series and costars as a conniving business manager. The second and third seasons arrive in the coming weeks.

“Gåsmamman: Season 1” (Sweden, with subtitles), a crime drama starring Alexandra Rapaport as a suburban mother pulled into the underworld to pay off a debt, and “The Vertical Line” (Italy, with subtitles), a dramedy revolving around the patients and caregivers at a hospital cancer ward, are new to MHz. New episodes on Tuesdays.

Also on Criterion are three films that launched Jack Nicholson—”Five Easy Pieces” (1970, R) and “The King of Marvin Gardens” (1972, R), directed by Bob Rafelson, and “The Last Detail” (1973, R) from Hal Ashby—plus Ken Loach’s touching “Kes” (1969), about a boy who bonds with a kestrel, and “The Arbor” (2010, not rated), an unconventional drama about the life of playwright Andrea Dunbar.