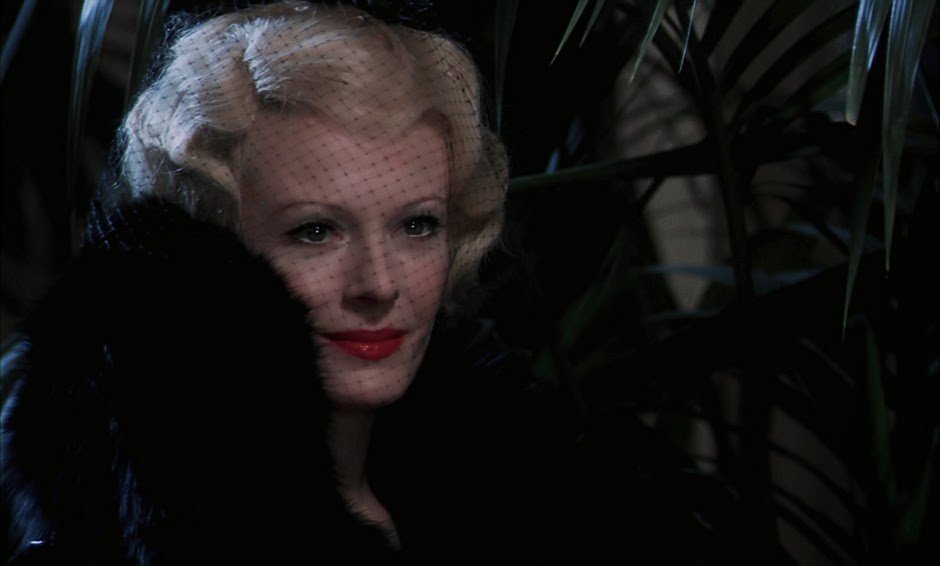 Daughters of Darkness (Belgium, 1971) – “Every woman would sell her soul to stay so young,” remarks smarmy, troubled Stefan (John Karlen) to his newlywed wife Valerie (Danielle Ouimet). He’s referring to the impeccably poised Countess Bathory (Delphine Seyrig), who sweeps into the off-season luxury hotel they previously had all to themselves, elegant and ageless, looking like some out-of-time aristocrat from Weimar cabaret high society, a soul sister to Marlene Dietrich in her prime in perfectly coiffed hair and a deep red gown that radiates both opulence and taste. And, of course, he doesn’t know how right he is.

Poised on the shadowy margins between art cinema and sexploitation, Harry Kümel’s elegant and sexy vampire film draws on the legend of Hungary’s Countess Elizabeth Bathory, the notorious “Blood Queen” accused of murdering innocent maidens to bathe in their blood, and mixes it with the lesbian vampire story “Carmilla” and the new freedoms of seventies genre cinema ushered in by the lurid Italian thrillers and Hammer’s sex-and-blood horrors of the late sixties and early seventies.

Delphine Seyrig, famed as a frosty beauty of art cinema (she appeared here between making The Milky Way and The Discreet Charm of the Bourgeoisie for Luis Bunuel), brings dignity and cool grace to the film with her imperious presence. Kümel places this jewel of an actress in a perfectly elegant setting: a grand but empty hotel, the ominous mood of the Belgian coast in winter, the handsome medieval architecture of Bruges, where a day-trip brings the newlyweds face-to-face with another in a string of murdered women, all young, beautiful and drained of blood.

Kümel’s story isn’t unusual or unexpected but his execution is superb and he fills in the seductive scheme of the Countess and her companion, Ilona (Andrea Rau), a small brunette beauty that the Countess sends to seduce Stefan, with the increasingly unsettling backstory of Stefan himself. The privileged, arrogant son of a moneyed family, scared to reveal his marriage to Mother (who isn’t exactly what we expect when Mother is finally revealed), he’s disturbingly fascinated by the murders and all but seduced by the Countess when she tells the story of her “ancestor” in her delicate coo. Which really freaks out Valerie, already weirded out by Stefan’s sadistic side, which comes out when he gets worked up.

For a survey of the legacy of Bathory in the movies, see Anne Billson’s “The fascinating Erzebet Bathory” in The Guardian.

, iTunes, GooglePlay and/or other services. Availability may vary by service.
Daughters of Darkness [Blu-ray]

On Blu-ray and two-disc DVD from Blue Underground with two commentary tracks (one by director Harry Kümel moderated by David Gregory, the other by star John Karlen with horror film historian David Del Valle), the 22-minute “Locations of Darkness,” with co-writer/director Harry Kümel and co-writer/co-producer Pierre Drouot talking about the film while revisiting the two hotels where the film was shot, and interview featurettes with co-stars Danielle Ouimet and Andrea Rau

The Blu-ray also includes a DVD edition of the Spanish horror The Blood Spattered Bride, Vicente Aranda’s take on the female vampire feature, this one adapted from Le Fanu’s “Carmilla.” Aranda turns the notorious female vampire into a manifestation of an inexperienced young bride’s own sexual fears and psychotic fantasies after she marries an aristocrat with a cursed family tree and a disposition for rough sex. Unlike the dreamy eroticism of French and Italian vampire films, this is earthy and edgy, a world where dreams literally push their way into nature.