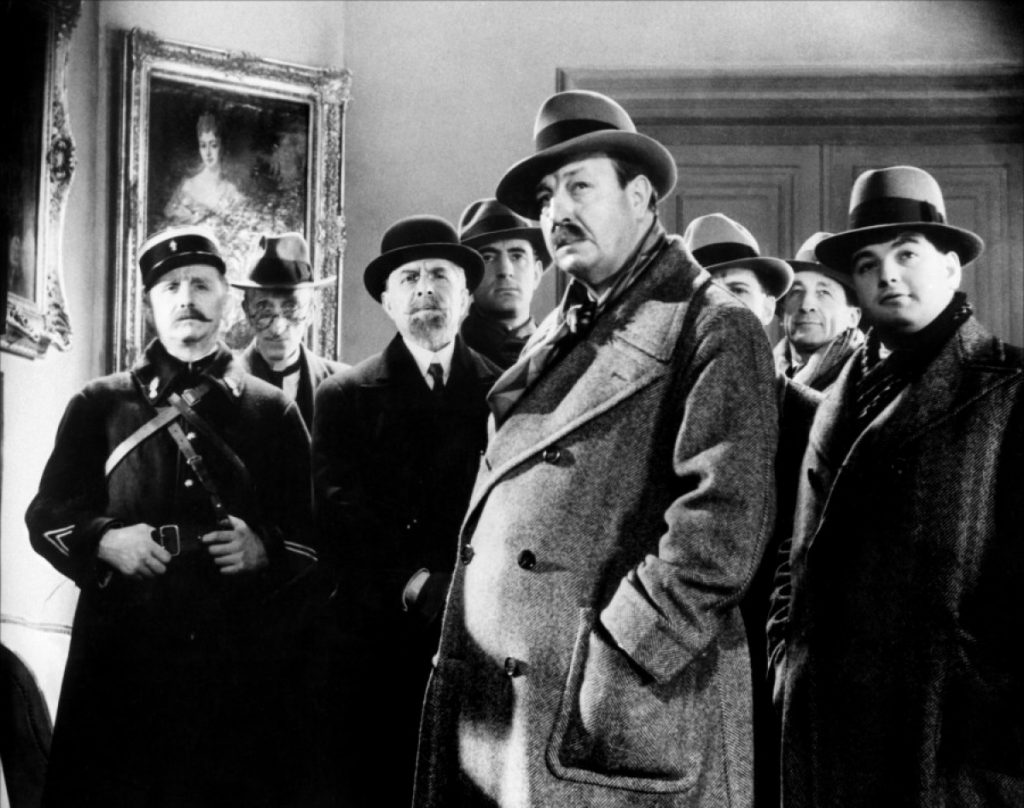 Julien Duvivier was once a giant of French cinema with a string of popular and critical hits in the thirties and a successful foray into Hollywood in the forties. He’s been largely forgotten as filmmaker even with though one of his biggest hits, Pépé le Moko (1937), remains a revered (and oft-revived) classic of gangster romanticism and a precursor to film noir. He was an innovator in the silent and early sound eras and helped create the poetic realist style that defined the great French cinema of the late 1930s and influenced American film noir.

Two of his early sound films, David Golder (1931) and La tête d’un homme (1933), are now available. They both star actor Harry Baur and reveal a versatile, creative filmmaker in the early sound era who, at his best, found innovative and expressive ways to tell moving and entertaining stories.

It’s the innovations that jump out in the opening moments David Golder (1930), his first collaboration with Baur and his first sound film. Duviver meets the challenge of the talkies with a dynamic use of sound in the rapid-fire montage of the opening scene. It emphasizes the energy and speed of the modern age as a succession of commentators build up his reputation in snippets of gossip about the man and his fortune. Duvivier edits sound in the same spirit of his images, with strong, jolting cuts from silence to startling noise and back.

Golder (Baur) is a ruthless banker who climbed to the top by destroying his enemies—his backstabbing partner is the latest victim of his vindictive dealings—but has no life outside of business, and certainly no joy. He dotes on his daughter, a spoiled heiress who simply loves his money, and ignores his wife, who spends his fortune as quickly as he makes it and would prefer he not actually show up to the country manor he purchased for her. This culture that Golder would rather avoid is the French version of an American pre-code movie of life among the rich and decadent, a wretched, spoiled world of human parasites whose contempt for those who actually work for money is matched only by their greed. Golder is pitiless and cruel, a self-made man who arrived penniless and built his fortune from nothing, but next to his wife and daughter and their shallow society, he’s the closest the film has to a hero. When his health turns bad, he decides it’s time to retire and let his family fend themselves but his daughter isn’t having any of it so once more he wades into the cutthroat world of international dealmaking.

David Golder is based on the debut novel of Irène Némirovsky, a Russian-born Jewish writer who was killed in the internment camps during the Holocaust (her unfinished final novel, “Suite Française,” written while she was in hiding during the occupation, was discovered and published a decade ago). And it announces Duvivier as a sophisticated filmmaker who not only refuses to let the challenges of the new dimension of sound deter his cinematic approach—his elaborate camerawork is as impressive as it is expressive—but uses sound inventively and evocatively. It’s a fairly simple story with little dimension to the characters—I don’t know if that’s a weakness of the novel or simply a limitation of the adaptation—but the culture of corruption and decadence and predatory greed seeps through every scene.

La Tête d’un Homme (1933) stars Baur as Georges Simenon’s Inspector Maigret in a murder mystery that plays in part like an early police procedural, with Maigret’s crack team interviewing witnesses and tracking down clues as Maigret zeroes in on his suspect. Is it the hapless petty thief who is found with the victim’s blood on his clothes, the nephew who turns out to be her sole beneficiary, or the suspicious, tubercular Czech medical student Radek (Valéry Inkijinoff), an arrogant mastermind who calls to mind Raskolnikov from Dostoyevsky’s “Crime and Punishment”?

Duvivier uses the project to become an exercise in style, technique, and tension. His camera prowls crime scenes and creeps up on suspects and he uses rear projection to turn an interview montage into an ingenious single take where the policeman remaining stationary in the foreground and the location dissolves into the next scene, the performer acting against a pre-filmed segment. The police station is a buzz of activity and Duvivier sketches out the camaraderie of the squad in quick, simple strokes. But by the end it becomes a battle of wits between Maigret and Radek, an angry psychotic who relishes the mind games with the cops, and Inkijinoff burns simmers in his scenes.

These are not restored films and they show signs of wear and damage, but they have been well mastered from archival sources and look and sound fine.