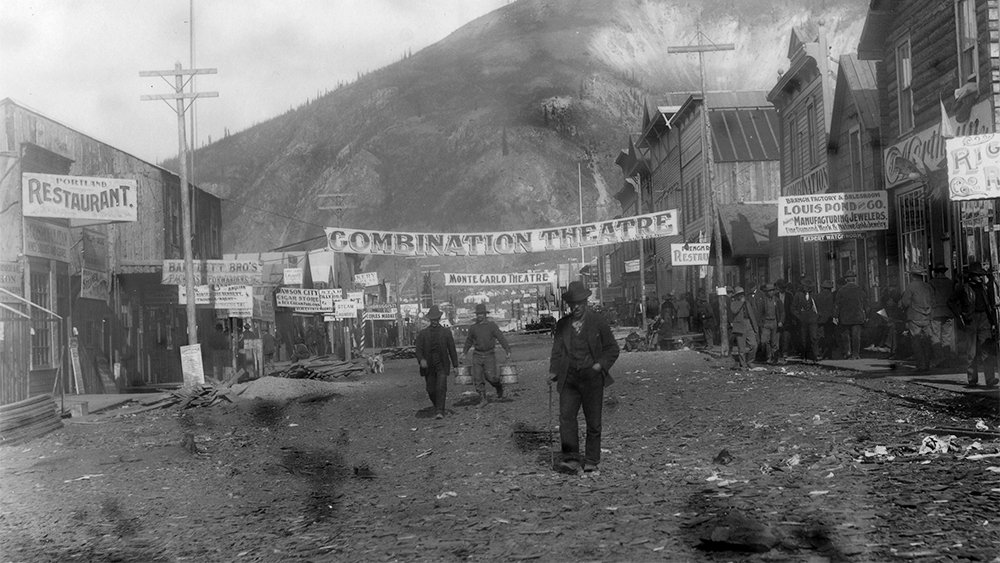 Bill Morrison’s films straddle film history and avant-garde expressionism, mining the wealth of silent film history and exploring the abstract beauty of decaying nitrate film, a particularly volatile medium that breaks down over time. Dawson City: Frozen Time (2016) celebrates the “Dawson Film Find” of 1978, thousands of reels of film buried in the permafrost, and tells the history of the Yukon town.

Founded in the 1890s Gold Rush, it grew from a muddy collection of buildings to a bustling city of 40,000 at its peak, and back down to a town of under 1000 inhabitants by the 1970s. Morrison frames the documentary with the discovery of the buried trove of silent films. Dawson City was the end of the line for film distribution and the studios wouldn’t pay the freight to return prints that were essentially worthless by time they reached the Yukon, so the films were stored and finally buried in an old civic swimming pool. Decades later, they were unearthed during a redevelopment project.

There’s no narration to the film and only a few interviews; the story is told almost entirely in archival photos and film clips (both dramatic fiction and newsreel/actuality) with the briefest of explanatory captions on the screen accompanied by an atmospheric musical soundtrack. Along with unexpected connections to film history (the entrepreneurs behind the Pantages theater chain and Grauman’s Chinese Theater in Hollywood got their start in Dawson City), the production celebrates the power of cinema as a time capsule and features clips of numerous films recovered in Dawson (every featured clip is duly identified) to help tell the story of the city and to illustrate the wonders of the world that cinema brought to the citizens in the 1910s and 1920s, including rare footage of the infamous 1919 World Series.

Add to Criterion Channel or watch for free on Kanopy, which is available through most public and college library systems.

The Blu-ray and DVD from Kino Lorber features a 10-minute postscript, a director interview, and 8 selections—newsreels, short films, and film fragments—preserved thanks to the Dawson Film Find.