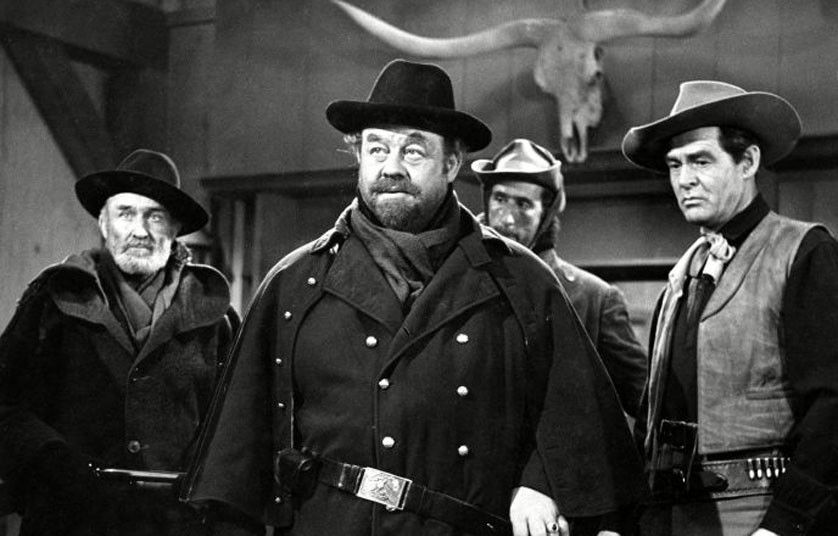 Day of the Outlaw (1959), a western set in a snowbound mountain town on the high frontier, is one of the toughest, most tension-filled pictures from Andre de Toth, a studio filmmaker who could be counted on to bring a savage edge to his assignments.

The town is already coiled like a spring thanks to the tensions between imperious ranch baron Blaise Starrett (Robert Ryan) and a farmer (Alan Marshal) stringing barbed wire across the range—Blaise has come to town to either intimidate the proud farmer into back down or killing him to stop the wire—as the citizens are trapped in heavy winter snows. Then an outlaw gang bursts in and essentially takes the town hostage. They’re on the run from the cavalry and their leader (Burl Ives) is bleeding out from a bullet wound, barely keeping his cutthroat gang in check.

The isolation of the town, a few buildings poking out of the muddy streets and surrounded by mountain ranges in the distance, feels even more adrift in the white blanket of snow cover and the wind howls through most every scene, enhancing the sense of desolation. It’s a spare visual design and de Toth leaves the dramatic compositions lean and simple and uncrowded.

Ryan’s wound up stillness makes a great contrast to the increasingly jittery gang members, who pace and fiddle and keep moving toward the women. They look like they are about to fly apart like a bomb and start looting and raping, and the still intensity of Ives, who holds his gaze and his ground has he gives orders and watches over it all, is all that keeps it from combusting. It’s a terrific, underappreciated western, and was an influence on Quentin Tarantino’s The Hateful Eight.

Add to My List on Criterion Channel or stream free on Hoopla, which is available through most public and college libraries.

, iTunes, GooglePlay and/or other services. Availability may vary by service.
Day of the Outlaw [DVD]

It’s on DVD from Timeless in a good-quality print at a bargain price. No supplements.