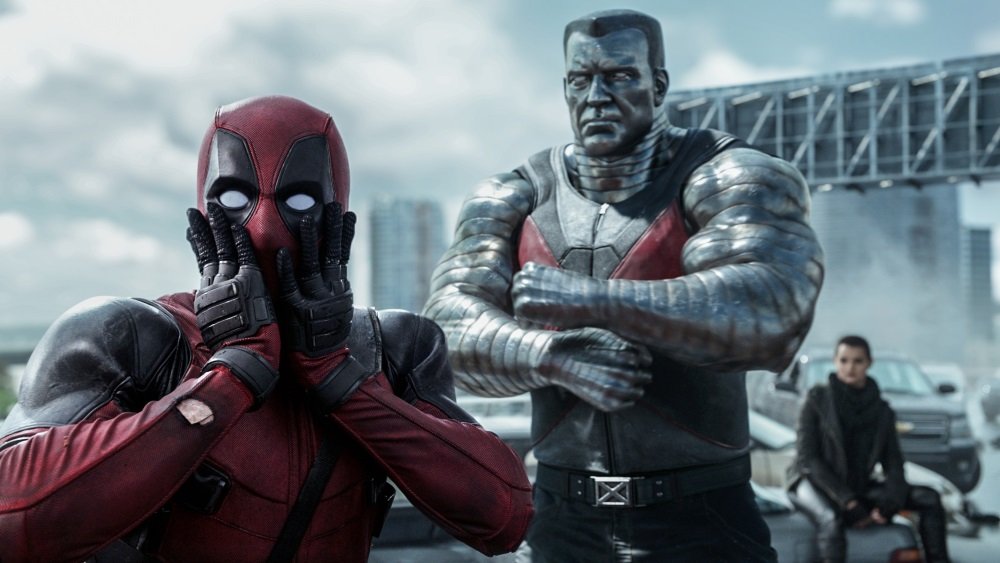 Irreverent, outrageous, and strewn with self-aware commentary and dark humor, Deadpool (2016) is as different a comic book superhero movie from the self-serious Man of Steel and Batman v Superman: Dawn of Justice as you’ll find. It is raunchy and gory and features a hero with no compunctions about killing the henchmen sent after him.

It’s based on a Marvel comics character but it’s not a Marvel movie per se. Technically an offshoot of the X-Men movies developed by 20th Century Fox, it both embraces and spoofs the Marvel movie formula. The opening faux credits set the whole tone, trashing the entire superhero industry and the film’s own star, Ryan Reynolds. His first superhero outing, Green Lantern, was one of the biggest disasters of the genre. Deadpool isn’t about to let him live it down and Reynolds plays along with it, making him perfect casting. He has the attitude necessary to pull off the balance of self-aware joking, sardonic commentary, and tormented anti-hero hiding behind humor.

He plays Special Forces veteran turned soldier-for-hire Wade Wilson, a cynic who emerges from a sadistic experiment with an indestructible body, a face like ground beef, and a penchant for turning to the camera to crack jokes about the absurdity of it all. By which I mean everything from the creatively violent mayhem of the moment to the superhero genre as a whole. He’s out for revenge against the mad scientist (Ed Skrein in generic British baddie mode) who made the transformation as painful as possible and then tried to leash him as an attack dog for an international assassination business. Not so successful in the last part. Wade escapes, takes the name Deadpool, dons a red spandex costume that covers him from head to toe, and tracks down his sweetie (Morena Baccarin), a hard-bitten hooker with whom he found true love and great sex. A lot of sex. Among the surprises of this R-rated superhero lark is its sex-positive attitude toward adult play and kinky games between consenting adults.

The rest is an unconventional treatment of a conventional superhero story. Allies will be recruited (auxiliary X-Men players Colossus and Negasonic Teenage Warhead, a true believer and a sneering teenager, respectively), comic relief applied (T.J. Miller), and battles engaged, which will lay waste to property and extras with tremendous outlays of CGI. No end of the world stuff here, which is a little refreshing in the increasingly epic showdowns in bigger and bigger movies. It doesn’t reinvent the genre but it has fun with it, delivering the spectacle that fans appreciate while winking at them, as if we are all in on the joke. And it turns out we are.

Deadpool came in at under $60 million, a bargain in the age of superhero bloat, and outgrossed Batman v Superman, which came in at more than four times the budget and even more in worldwide promotion. Not too bad for a hero unknown outside of die-hard comic book collectors, a first time director (Tim Miller came out of music videos and commercials), the star of one of the biggest comic book movie flops in the rocky history of the genre, and an R rating for blood, sex, and bad attitude.

Also on DVD and Blu-ray and on SVOD through Amazon

, iTunes, GooglePlay, Vudu and/or other services. Availability may vary by service.
Deadpool [DVD]

The DVD features “Deadpool’s Fun Sack” (a collection of short featurettes running about 24 minutes) and a gag reel but the Blu-ray is loaded with supplements, including two commentary tracks, five featurettes, deleted and extended scenes, and galleries of art and storyboards.