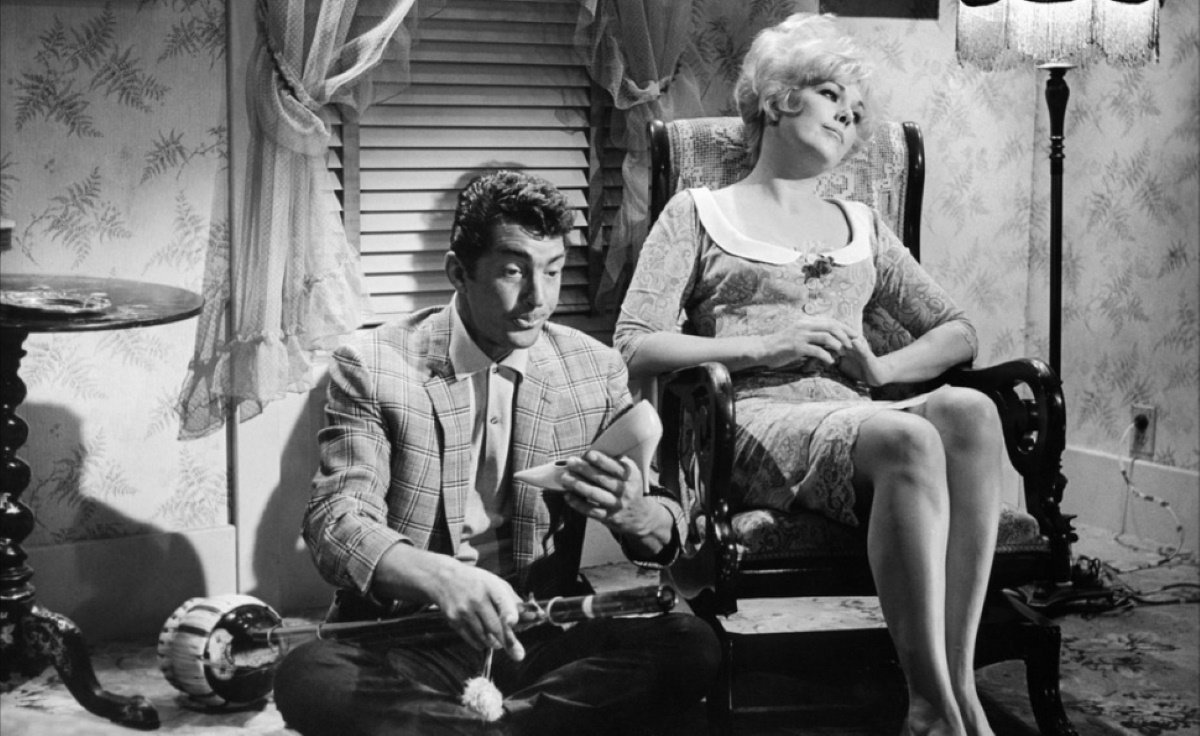 Billy Wilder was a master at sneaking sex into films like The Apartment and Irma la Douce in the years before the ratings system, but this is his most gleefully cynical and brash sex comedy Kiss Me, Stupid (1965) was so maligned on release it almost sunk Billy Wilder’s career.

Dean Martin plays a parody of himself simply named Dino, a boozing, womanizing Vegas singer who is stranded in the town of Climax, Nevada, thanks to the machinations of amateur songwriters Orville (Ray Walston) and Barney (Cliff Osmond). They will do anything to sell him their songs, even if means plying him with Orville’s wife. Because what’s more attractive than someone else’s girl? The problem is that Orville is pathologically jealous, so he picks a fight with his real wife (Felicia Farr) and then hires a local prostitute (Kim Novak) to play house with him for Dino’s benefit.

It’s a perversely cynical sex comedy with a brass heart and a thoroughly modern twist of a happy ending and Wilder and co-screenwriter I.A.L. Diamond, adapting an Italian sex farce, revel in the smutty garishness of the whole situation. Walston, a terrific character actor who was a last-minute replacement for Peter Sellers, plays his part big and goofy while Osmond is so enthusiastically opportunistic he’s practically a smiling, overeager sociopath.

Novak both plays up and against her bombshell image as Polly the Pistol, a workaday hooker with cheap makeup who works through a headcold that muffles her every line. And Martin is pure cartoon wolf as Dino, sizing up Polly like a piece of meat and practically smacking his lips as she’s dangled in front of him.

It was condemned by almost everyone when it came out and today it is more cult film than cinema classic. But this odd artefact of 1960s cinema is weirdly, grotesquely funny, a cartoon of a sex farce with a script full of double-entendres that aren’t subtle and are quite tame by modern standards but are still often quite inventive.

Added bonus: the songs were provided by Ira Gershwin, who added lyrics to unfinished melodies left by his brother George and purposely gave them an amateurish clumsiness.

Not rated at the time of its original release (and slapped with an adults only X in England), it has since been rerated PG-13.

Also on Blu-ray and DVD and on SVOD through Amazon Video, iTunes, GooglePlay, Fandango, Vudu and/or other services. Availability may vary by service.
Kiss Me Stupid [Blu-ray]
Kiss Me, Stupid [Olive DVD]
Kiss Me, Stupid [MGM DVD]

Olive’s release is mastered from a recently restored transfer that is a much improved from its original MGM DVD release. DVD Savant Glenn Erickson has done his research and discovered that this release also presents the slightly longer International cut of the film. The differences are minor, in some cases a matter of seconds clipped to appease American censors, but it makes the Blu-ray debut even more attractive.