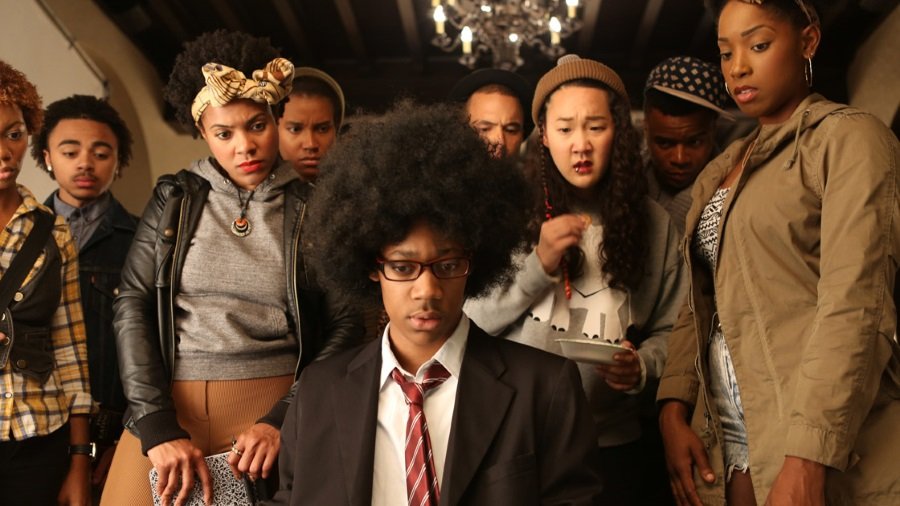 Dear White People (2014), the feature debut of director / writer Justin Simien, is a sharp, smart, ambitious satire of race, racism, privilege, prejudice, and power at an Ivy League college that has drawn comparisons to Spike Lee.

It’s a fitting comparison. Simien uses humor and provocation to explore issues of race and race relationships in the so-called post-racial era, he spreads ideas and perspectives around a large array of characters and creates debate through criss-crossing stories, and uses the crucible of college (as Spike did in School Daze) as both microcosm and as a specific culture where young people develop their identities as adults. Simien is his own filmmaker, however, with his own style and sensibility.

The title comes from the sarcastic punctuations of a radio program from campus activist Samantha “Sam” White (Tessa Thompson), who punctures the hypocrisies of political correctness with bull’s-eye stingers that are the buzz of the campus. She’s the rabble rouser who finds herself, against her own expectations, elected as head of her house, but she’s just one of a number of characters in the lumpy melting pot of a busy ensemble piece. Tyler James Williams, once the cute kid of the TV sitcom Everybody Hates Chris, is Lionel, the subject of savage harassment as a gay black nerd trying to find his voice as a journalist in a fringe paper. He’s promised a feature in the award-winning campus paper if he wades into the controversies getting fanned by Sam. Or at least that’s how the all-white staff of the officially-sanctioned paper sees it, and if this film is about anything it is how the meaning of issues and events shift according to perspective, experience, and expectations.

Justin Simien suffers no lack of ambition. Most of the criticisms you can lob at the film are due to overreach. There are hypocrites on both sides of the battle lines and everyone projects a persona that they carefully cultivate. Their real selves are protected behind the social mask and contradictions abound between aspiration and reality. The white characters, however, have far less dimension and less interesting contradictions than the black characters. It’s a weakness in the debate Simien stirs up but it is also a matter of perspective. This experience is seen almost completely from the black student community, a diverse collection of individuals who both evoke and defy stereotypes. They’re a campus minority that occupies a majority of the film (the film tagline is “A satire about being a black face in a white place”).

Simien is a smart storyteller who delivers both a well-articulated sense of outrage and a resigned frustration at a system that is more concerned with maintaining appearances than acknowledging and addressing problems. And he has an unexpectedly sharp satirical wit and uses humor to pare away the familiar understanding of its issues and offer a different perspective. His ambition is ultimately more Do the Right Thing than School Daze, complete with a climax inspired by a real-life event that brings the issues to a flashpoint and a denouement that denies easy solutions.

It won the Jury Prize at the Sundance Film Festival and best first screenplay at the Film Independent Spirit Awards.