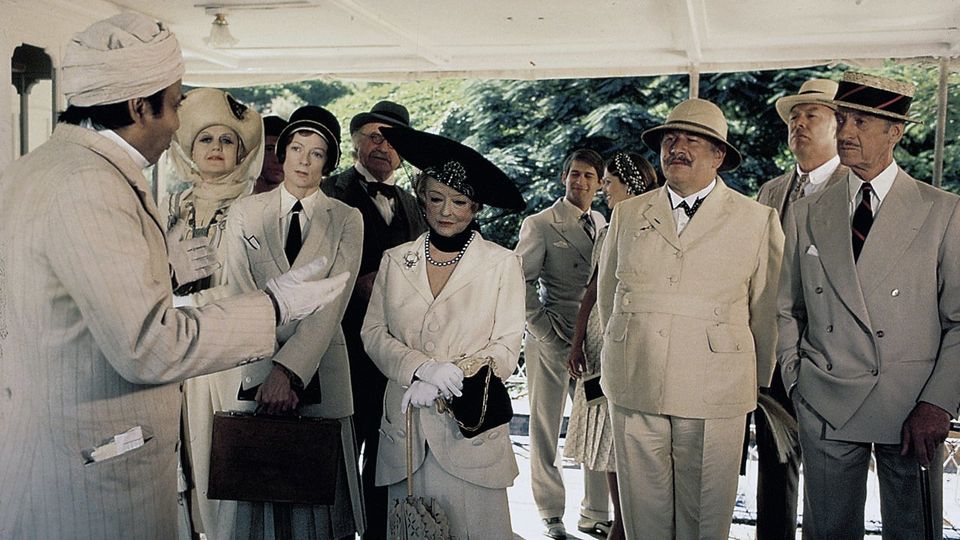 Agatha Christie became fashionable again in the 1970s thanks to Murder on the Orient Express (1974), starring Albert Finney as detective Hercule Poirot. It was a success and producers John Brabourne and Richard Godwin moved on to a follow-up.

Peter Ustinov plays the fussy Belgian sleuth in Death on the Nile (1978). He puts his “little gray cells” to work when an heiress (Lois Chiles) is murdered on small passenger ship while on her honeymoon. Where Orient Express featured a proverbial all-star cast, Death downsizes to a somewhat less stellar line-up of fading stars, rising talents, and reliable character actors playing a social register rogue’s gallery of arrogant, greedy, and resentful suspects.

Top of the list is Mia Farrow, who lost her fiancé (Simon MacCorkindale) to her (former) friend (Chiles). Of course, Poirot discovers that everyone on board has some motivation for murder: the questionable German doctor (Jack Warden), the embezzling American lawyer (George Kennedy), the long-suffering personal maid (Jane Birkin), the rich American widow (Bette Davis), and the flamboyant romance novelist (Angela Lansbury). Davis plays the role in bitchy diva mode and Lansbury, who went on to play Christie’s Miss Marple and star in Murder She Wrote on TV, is all theatrical flamboyance as the high-living author.

It’s a fun, if somewhat slow-moving murder mystery that favors glamor and drawing room banter over suspense, like a lavish version of a British TV mystery set in the 1930s. Anthony Shaffer, the Tony award winning playwright of Sleuth and screenwriter of Alfred Hitchcock’s Frenzy, adapts Agatha Christie’s novel and provides the witty repartee and cutting remarks. And while it plays out largely within the lavish confines of a passenger ship on the Nile, visits to the pyramids and the Sphinx give the film a handsome visual scope and spectacle. The costume design won both the Academy Award and the BAFTA.

Kenneth Branagh remade the film in 2022 on a bigger canvas and with a genuine all-star cast. I’m partial to Peter Ustinov’s Poirot.