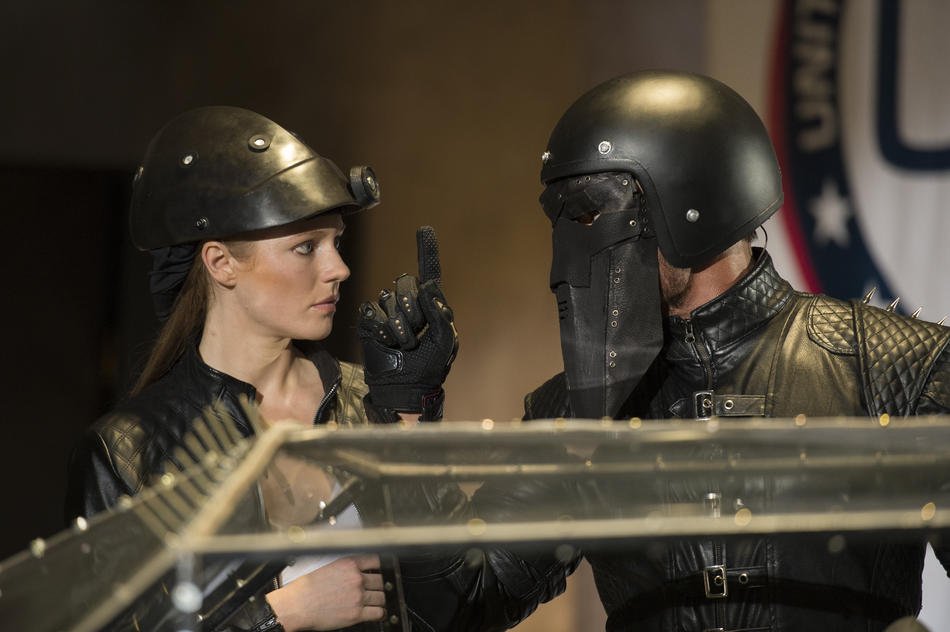 Death Race 2050 (2016) – After Paul W.S. Anderson’s humorless Death Race, his 2008 remake/reworking of the Roger Corman-produced cult movie Death Race 2000 (1975), there’s something oddly satisfying in getting a genuine remake produced by Corman himself in the impudent spirit of the original.

Death Race 2050 is a modern B movie, produced directly for the home video market (Blu-ray, DVD, VOD) on a minimal budget, and director / co-writer G.J. Echternkamp has no illusions of what he’s making. In the best Corman tradition, he delivers the grunge action movie goods and a little more. It’s not necessarily a “good” movie—it’s ragged and choppy and scattershot, with broad, cartoonish gags and easy jabs over pointed satire—but it’s also fun, unpretentious, cheeky, energetic, gleefully trashy, and filled with junky spectacle.

Manu Bennett is Frankenstein (the role originally played by David Carradine) and the ostensible hero of the film, a hardcore, apolitical driver and the reigning Death Race champion, and Marci Miller is his co-pilot and traveling reporter, a full-body camera providing the VR experience to the media-sedated citizens of the United Corporation of America. In country mired in industrial pollution and ecological disasters (New Los Angeles is The Land of 1,000 Islands) and choking on overpopulation and 90% unemployment, the Death Race is the annual bread and circus distraction concocted by The Chairman (Malcolm McDowell), a clown of an emperor with a wild white hairdo and a bombastic media presence. Just as in Paul Bartel’s original, drivers are flamboyant celebrities and points are racked up by taking out pedestrians (extra points for infants and senior citizens), and there’s a rabid revolutionary underground ready to take out the drivers in full view of the audience.

In a culture full of DTV and cable films that simply go through the motions of action movie chops, director G.J. Echternkamp is perfectly adequate as a mechanic of speed demon spectacle and crash-crazy cinema—he passes the audition without making an impression—but he never stops cramming the film full of color, comedy, clever asides, cartoonish gags, and celebrity ego with a nitrous boost. In this media sideshow, Manu Bennett’s Frankenstein is both the least flamboyant and the most centered character in the film, and he’s earned his fatalism. The Death Race is indeed the opiate of the masses and the miserable, impoverished survivors of this future are hopeless addicts for their fix.

Don’t mistake the flamboyant lampooning for actual political satire. This broadside spoof of an action comedy is more cheeky than satirical with a cartoonish sense of humor and rather justified sense of poetic justice, as long as your idea of poetry remains on the level of graffiti sloganeering and B-movie splatter comedy. Echternkamp doesn’t really have any message here, at least not one he seems committed to, but he delivers his despairing portrait of unthinking American self-interest and immediate gratification with a ragged gusto that seems appropriate to our times. Rise up, America, and take the driver’s seat in your own Death Race!

Blu-ray and DVD includes the featurettes “The Making of Death Race 2050” (10 mins), which features Malcom McDowell proudly (and accurately) proclaiming “There is no subtlety to this whatsoever,” “The Look of Death Race 2050” (6 mins) about the production of the film (which was shot largely in Lima, Peru), “Cast Car Tours” (8 mins) on the cars and their drivers, and the shorter “Cars! Cars! Cars!” (4 mins), which cuts out the drivers, plus ten deleted scenes (a little over 5 minutes). The Blu-ray edition also includes bonus DVD and Ultraviolet Digital HD copies of the film.