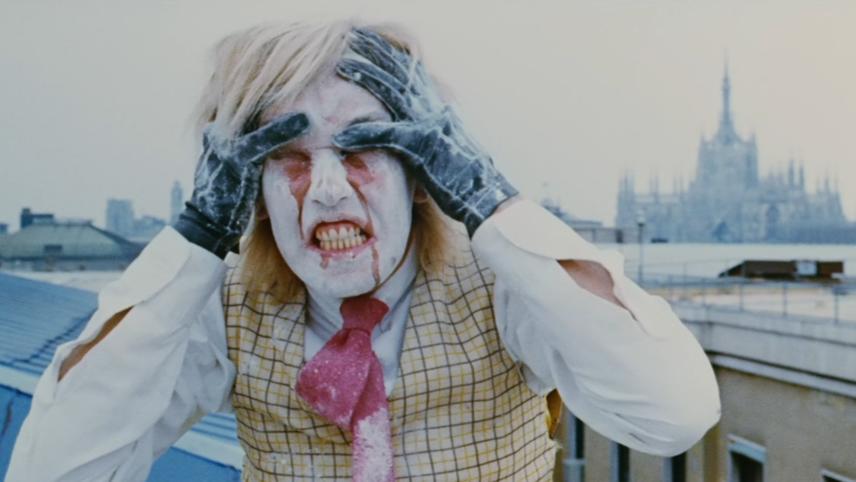 Death Walks at Midnight (Italy, 1972) is not actually a sequel to Death Walks on High Heels (1971) but in the proudly opportunistic tradition of Italian genre pictures it recalls an earlier success and director Luciano Ercoli he reunites his team of collaborators.This time around, Nieves Navarro (under the screen name Susan Scott) is a fashion model named Valentina (a reference to the comic book series by Guido Crepax?) who reluctantly agrees to be the subject of an experimental hallucinogenic drug for an unscrupulous tabloid reporter (Simon Andreu). In the middle of a psychedelic trip she witnesses a gruesome murder in the apartment across the way but the empty apartment is spotless by the time the police check it out the next day, The reporter chalks it up to an acid flashback—there actually was a murder committed in the same apartment months ago and he’s convinced the drug unlocked a memory she buried out of trauma—so she turns detective herself to solve the mystery. Valentina becomes a high fashion Nancy Drew navigating a world of eccentric informants, colorful suspects, and bohemian allies.

Ercoli pushes his style to more stylistic flamboyance: curious camera angles, unsettling compositions, a sense of Gothic around the edges of the modern world. Valentina’s sometime-lover Stefano (Pietro Martellanza), an artist with a lavish studio, gives Ercoli the opportunity to splash a little abstract color around. He pushes the film through creative set pieces and wild plot twists with a snappy pace, keeping the rollercoaster of suspense and spectacle moving with rapid but smooth momentum.

Most refreshingly, Navarro takes the lead in the investigation and in the film. The men are a few beats behind, though no less arrogant for it. She isn’t even obligated to disrobe this time around, which I attribute to a sign of respect and affection from director to actress. The later married and lived happily ever after into retirement, until Ercoli’s death in 2015.

Not rated, in Italian with subtitles

The Blu-ray and DVD releases from Arrow are newly remastered from a 2K restoration from original camera elements and feature both Italian and English language soundtracks with optional English subtitles, plus commentary by giallo historian Tim Lucas, a 2015 interview with Ernesto Gastaldi (31 mins), visual essay “Desperately Seeking Susan” by Michael Mackenzie that explores at the collaboration between Ercoli and Nieves (27 mins), and the alternate TV version of the film, which runs four minutes longer and features additional and alternate footage. The alternate version is taken from an inferior video source.

It’s also available in a Blu-ray+DVD 4-disc box set with Ercoli’s Death Walks on High Heels and an accompanying 60-page booklet with new essays by Danny Shipka, Troy Howarth, and Leonard Jacobs. The box set is limited to 3000 copies.