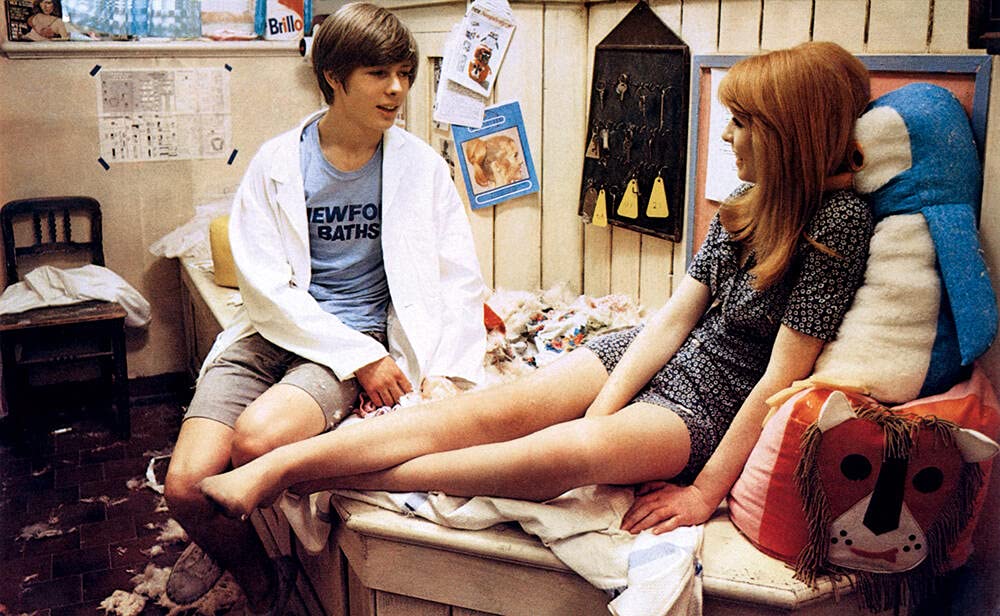 15-year-old Mike (John Moulder-Brown) gets his first job as an attendant in the Men’s private baths of a dreary, clammy public swimming pool in suburban London, but his tips come from the middle-aged women in the other section, who pay generously for him to (in the words of his gorgeous co-worker Susan, played by Jane Asher) “just go along with the gag, that’s all they want.” All he wants is Susan.

Polish director Skolimowski is a curious cult director without a cult, creator of another weird and creepy film deserving resurrection—the 1978 psychological mind game The Shout—and after 1991 he stopped directing for almost two decades, returning with the acclaimed Four Nights with Anna (2008). Before EO (2022) was released to glowing reviews, he was probably better known for his onscreen turns in such films as Eastern Promises (2007), The Avengers (2012), and Mars Attacks! (1996).

Deep End combines Skolimowski’s own darkly psychological interests with a perfectly British sensibility rubbed raw. He punctuates the veneer of social realism with cheeky sexual metaphors, from the red he injects into the film like a flush of lust and desire to the goopy spurt of an ineffectual fire extinguisher as the final punctuation of a scene of frustrated coitus. Cat Stevens sings a few songs with the group The Can, but they’re a lot darker that those he did for Harold and Maude, another film about a young virgin in a relationship with an older woman.

The film really tosses Mike into the deep end of sexual desire and social currency, where the teen is ill-equipped to deal with his urges or the emotions, let alone the mercenary folks around him. Former British sex symbol Diana Dors plays a fleshy, leering customer who practically mauls young Mike, treating him like a sex toy to get herself off in the most hilariously grotesque and creepy bit of self-gratification I’ve seen.

Mike, meanwhile, turns stalker, obsessively following Susan on her dates. She alternately encourages and attacks him for it, enjoying the attention until he gets too intrusive, treating it all like a game. Mike may be wrapped up in his own wants and demand attention (or, more specifically, Susan’s attentions) like a child throwing a tantrum, but Susan is no idealized innocent and is just as self-absorbed and emotionally unaware and inarticulate. Engaged to a creep because he’s got the money to lift her out of her dreary existence, she’s engaged in an affair with an older swimming instructor who paws at his teenage girl students. With Mike, she can be chummy and then turn cold and vindictive, flirting and teasing and then callously turning on him, as much out of boredom as her own frustrations as the unfulfilled object of everyone’s obsession. Sex may be power, but it certainly doesn’t empower anyone here

As of this writing, Deep End is unavailable on home video in any form in the U.S.