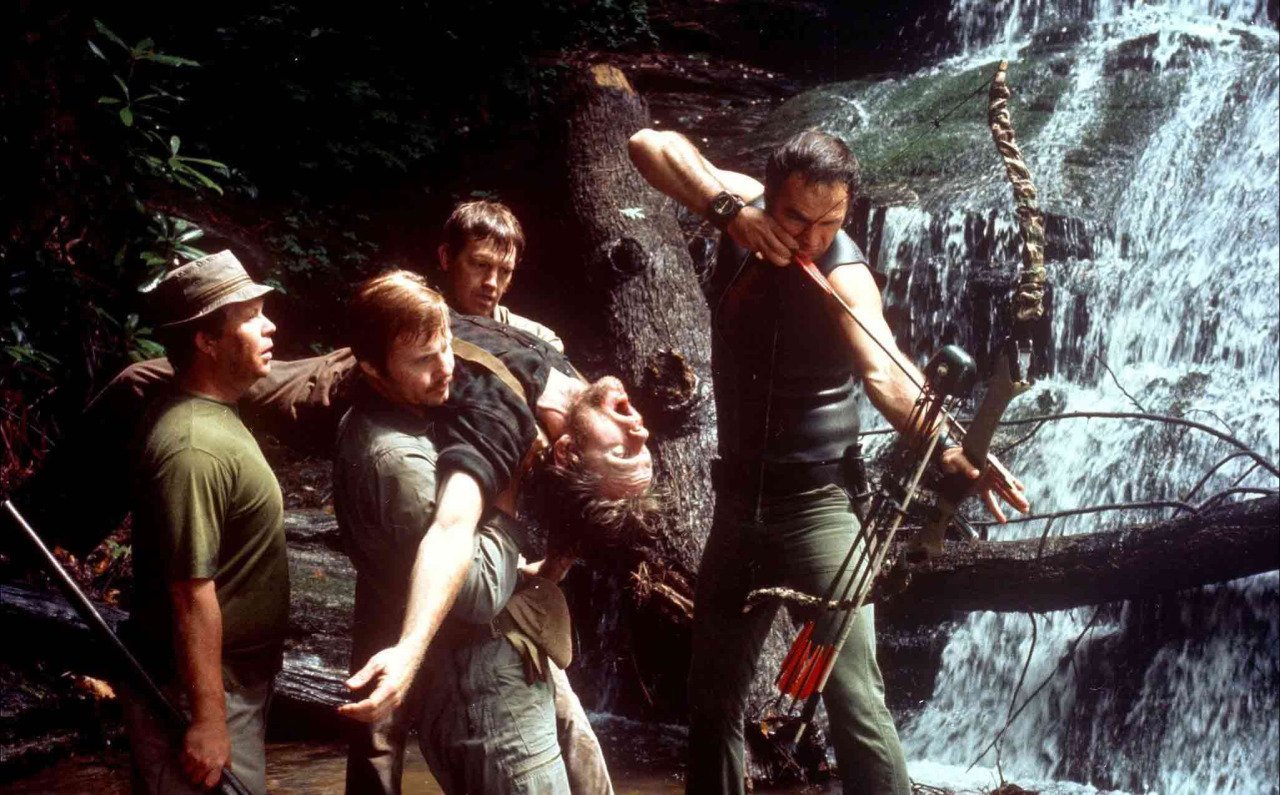 Deliverance (1972), John Boorman’s harrowing adaptation of James Dickey’s novel, is as bracing and haunting now as it was when it first shook up audiences 35 years ago.

Jon Voight stars as an urban family man whose weekend escape in a whitewater canoe trip with three friends down a soon-to-be-gone Appalachian river transforms from a trip through wild lost paradise into an escape from a savage land. “You don’t beat this river,” warns trip leader Lewis (Burt Reynolds, in one of his career-best performances), a weekend warrior and tough-guy Thoreau who speaks a survivalist game. He winds up living a nightmare of his fantasy when they tangle with a pair of vicious mountain men.

The film remains most famous for the “Dueling Banjos” music and the harrowing assault on Ned Beatty’s character (“Squeal like a pig!” will haunt you for days), but Boorman’s interest is in the sense of mortality it reveals, both in their fight for their survival and in their battle with their consciences in the aftermath. Ronnie Cox is the fourth rafter (he’s the guitar picker in the “Dueling Banjos” duet) and novelist James Dickey has a cameo as the sheriff.

It was nominated for three Academy Awards, including for best picture and for John Boorman’s direction, and the performance of “Dueling Banjos” won a Grammy. It was added to the National Film Registry in 2008.

The Blu-ray book edition features the same transfer as the 2007 Blu-ray release (very nice except for a few brief night shots, which exaggerate the weaknesses in the original day-for-night process) and a new DTS HD audio mix. New to this edition are the brand new half-hour featurette “Deliverance: The Cast Remembers” with new interviews with Jon Voight, Burt Reynolds, Ned Beatty and Ronny Cox recorded at the Burt Reynolds Museum in Jupiter, Florida, and the illustrated booklet. Carried over from the earlier release is articulate commentary by John Boorman, who tells many of the same production stories that also come out in an excellent four-part 2007 documentary, plus the original archival featurette “The Dangerous World of Deliverance.”