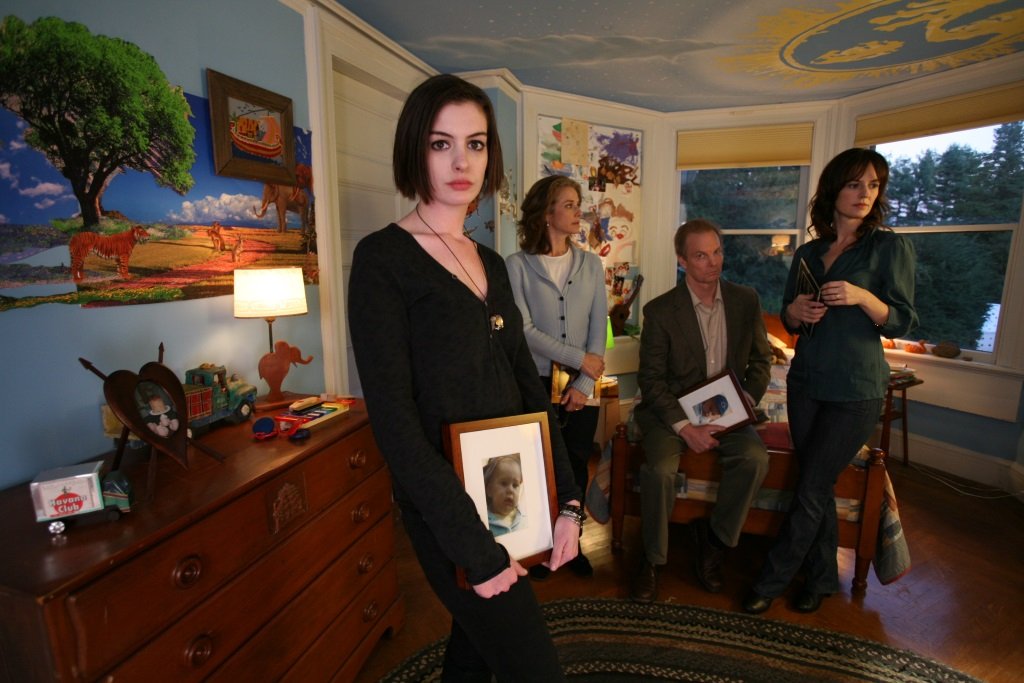 High-strung, self-involved rehab veteran Kym (Anne Hathaway) takes a vacation from her home away from home for a shaky trip back to the bosom of her family to attend her sister Rachel’s (Rosemarie DeWitt) wedding in Rachel Getting Married (2008). Still not recovered from being the center of attention, Kym constantly and blatantly grabs for the spotlight—you can almost hear the grinding of teeth when she turns a toast into a comic monologue of her twelve-step disasters—and a lot of unresolved issues are churned up, which isn’t quite the wedding gift that Rachel was hoping for.

It’s a classic dysfunctional family gathering set-up, scripted by first time screenwriter Jenny Lumet (daughter of Sidney) that hits the expected conflicts and collisions, right about where you expect them to show up, and shot in that overworked, aggressively independent style of handheld digital camera, practical lighting, and lots of group scenes where the camera bobs through what looks to be the controlled chaos of at least partially improvised scenes. But behind the camera is Jonathan Demme and the way he lets the digital camera roam through long takes and big ensemble scenes gives it an authenticity.

Hathaway, who has previously played the Cinderella part to death, stretches herself admirable and convincingly to play a spoiled, self-centered, broken young woman. She’s not afraid to be utterly disagreeable and never begs for sympathy or plays it for laughs. It’s more attitude than anger, but it’s still fearless for a performer whose career has been built on charming audiences with sweetness and spunk and it earned her her first Oscar nomination.

Less showy but even more layered is Rosemarie DeWitt’s portrayal of Rachel, a pent-up knot of frustration and fury and jealousy at how Kym always sucks the attention from the crowd and from her family like an emotional vampire. Kym needs the assurance that she’s noticed, even if it means grandstanding at the rehearsal dinner and turning the toasts to the bride and groom into a self-serving paean to her own dysfunction.

Demme plays with the style like a new toy, but the sensibility recalls his early ensemble films. He brings an inclusiveness and a sense of community to the film and gives characters we may only meet once a lived-in quality. An extended wedding party dinner, full of speeches and elaborate toasts, could have felt unending; Demme makes it feel like family in the best ways, with a generosity of spirit flowing from friends and relatives. And he makes music a defining part of the community with a soundtrack that arises from the guests (among them Robyn Hitchcock) and radiates out to create an atmosphere of joy and celebration, always on the verge of being yanked away by Kym’s next outburst.

The film doesn’t end hugs and forgiveness, at least not the way we might expect, and along the way is one of the most potent explosions of simmering anger and blame and unresolved rage I’ve seen in a family drama. There’s no neat resolution at the end of this weekend gathering, but there is a little understanding and maybe the beginnings of forgiveness.

Leaves Hulu at the end of September. Add to My Stuff on Hulu

, iTunes, GooglePlay and/or other services. Availability may vary by service.
Rachel Getting Married [Blu-ray]

The Blu-ray and DVD feature two commentary tracks (one by screenwriter Jenny Lumet with the producer and editor, the other by co-star Rosemarie DeWitt), two featurettes, a 50-minute onstage Q&A with the cast and crew at the Jacob Burns Film Center and deleted scenes.