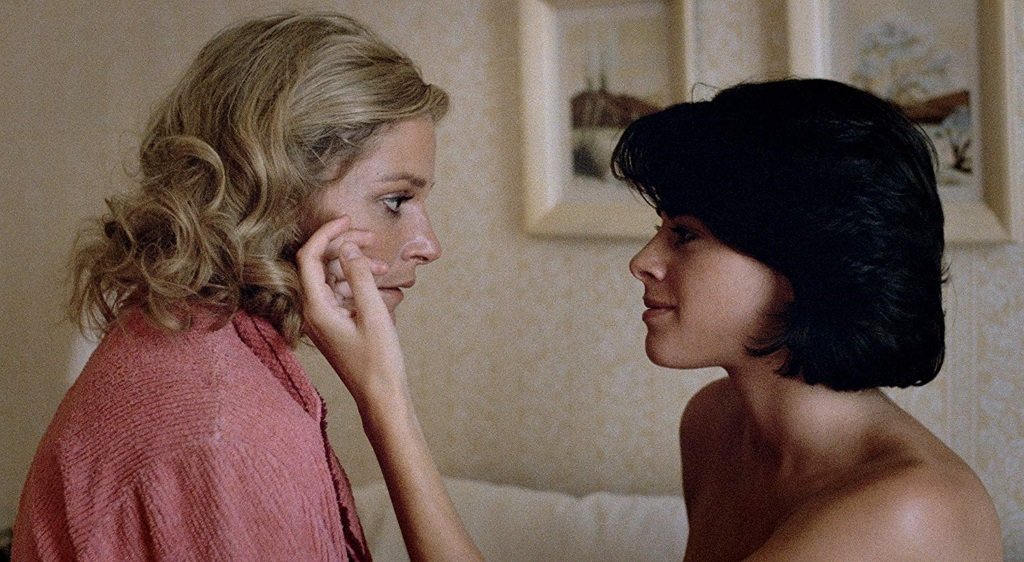 An early example of modern American independent cinema and a landmark film in the presentation of same-sex romance in American movies, Desert Hearts (1985) follows the journey of Vivian (Helen Shaver), a college professor who arrives in Reno for a six-week stay at a vacation ranch set up for women who have come to Nevada for a divorce.

The time is 1959, a more conservative era when divorce was not as culturally accepted and was more difficult to obtain, and Vivian is conflicted when she finds herself intrigued by Cay (Patricia Charbonneau), a younger, openly lesbian woman. Vivian is an East Coast intellectual out of place in the desert town of gambling dens and ranches and Cay is a restless free spirit who works at the casino and has a revolving door of lovers, but their connection deepens as they spend time together. Filmmaker Donna Deitch was inspired to bring Jane Rule’s novel “Desert of the Heart” to the screen because she wanted to make a lesbian love story that did not end in tragedy, which may seem odd today but was unseen in mainstream American cinema at the time. But her film focuses on the personal story rather than any political statement, exploring both Vivian’s struggle against her straight-laced nature and resistance to the idea that she could be sexually attracted to another woman, and Cay’s resistance to a genuine emotional commitment in a lifestyle of casual sex.

Produced on a tiny budget, it is sustained by strong performances and a powerful chemistry between the actresses, and it is the rare same-sex love story of the era that embraces the possibility of a happy ending.

, iTunes, GooglePlay and/or other services. Availability may vary by service.
Desert Hearts (The Criterion Collection) [Blu-ray]

Criterion releases the film on DVD and Blu-ray in a special edition featuring filmmaker commentary, cast and director interviews, and new and archival featurettes.