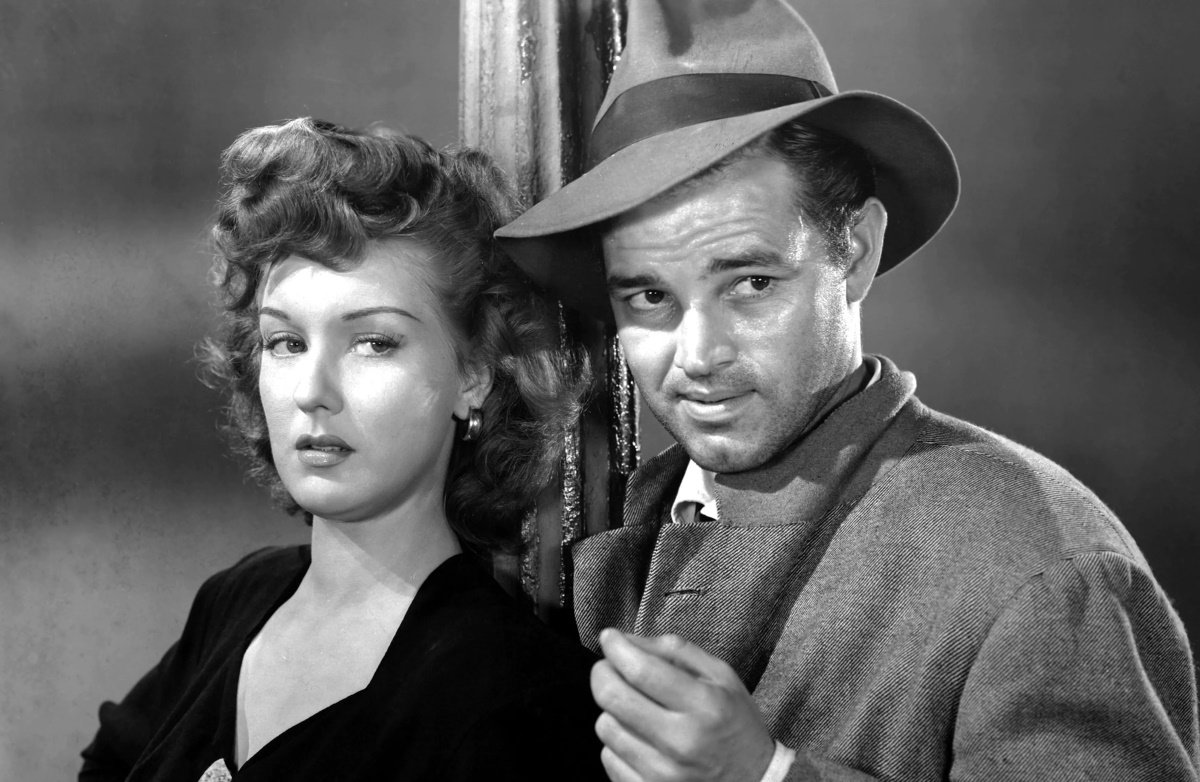 I like to think of Edgar G. Ulmer’s waking nightmare Detour (1945), an existential, almost surreal thriller, as the “B”-est film noir ever made.

Shot on a tiny budget for poverty row studio PRC, Hollywood’s cheapest B-movie outfit, on their soundstages and surrounding desolate desert highways, it stars flat B-movie leading man Tom Neal as gloomy New York pianist Al Roberts, who hitchhikes to Los Angeles and takes a ride the wrong car. He becomes a bystander at the freak death of his traveling companion imagines that he has no other choice when he drags the body off the road and adopts the dead man’s car and identity. And then he meets feral femme fatale Vera (the aptly named Ann Savage), the hardest, most bitter femme in Hollywood’s rogue’s gallery.

Under Ulmer’s direction, however, he’s less a victim of bad luck and poor choices than a passive puppet whose strings are pulled by a sadistic deity, and he fused his Poverty Row minimalism with the out-of-control desperation of the bleakest noir thrillers. Ulmer’s gently gliding camera creates a gritty poetry out of unadorned sets, desolate desert roads, and fog-bound city streets, a world ungrounded by specificity; the L.A. scenes don’t even feature one recognizable stock footage landmark. Bland sets and generic locations become an austere, unreal world and limited performances from Hollywood washouts are transformed into minimalist characters in an existential universe.

Ulmer creates dark, nightmarish world in shadow and suggestion and delivers a modernist masterpiece: the greatest film ever made in under a week (or so goes the legend)!

It was remade in 1992 by Wade Williams, who returned to the original novel for additional material and cast Tom Neal Jr. in the role originally played by his father. It remains a curiosity at best.

The film was in the public domain and available on home video in rough, beat-up prints (at best) for decades before it was restored by the Academy Film Archive and The Film Foundation. We only list high quality editions at Stream On Demand.

The 4K restoration is a quantum leap in quality. It brings clarity and focus to every frame and delivers a clean soundtrack free of pops and hiss. While some insist that well-worn editions best exemplify the grindhouse experience, I vehemently disagree. It was meant to be seen as it was first presented to audiences. Ulmer understood and overcame the limitations of budget and turned it into a resonant big screen experience. The clarity reveals strong images and evocative camerawork, and Ulmer’s visual austerity creates an unreal, sometimes haunting atmosphere.

The Criterion Collection presents that gorgeous 4K restoration on DVD and Blu-ray, which is a quantum leap in quality from the best of the previous DVD releases. The special edition also includes the 2004 documentary Edgar G. Ulmer: The Man Off-Screen, an interview with Ulmer scholar Noah Isenberg, and a featurette on the long road to restoration.