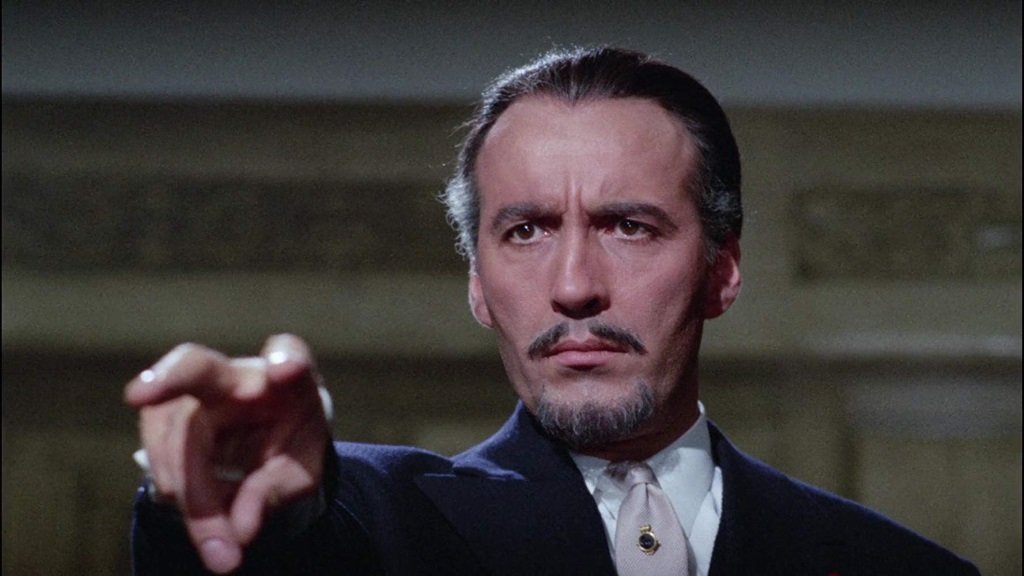 Christopher Lee, long the house villain of the horror films from England’s Hammer Films, takes a rare heroic turn in The Devil’s Bride (1968), also known in the U.S as The Devil Rides Out.

Lee plays scholar and occultist Duc de Richleau, the kind of role that Peter Cushing had made his métier, as a commanding figure in a trim goatee with a dark elegance and intensity and a dash of swashbuckling flair. This is 1929 England, when the flamboyant occultist Aleister Crowley made Satanism something of a fad as World War I left so many people broken and disillusioned. When Richleau discovers that the son of a war buddy has joined a satanic cult lorded over by the quietly malevolent Mocata (Charles Gray, perhaps best known stateside as the narrator in The Rocky Horror Picture Show) he risks all to save his young friend.

Director Terence Fisher, working from a literate script by genre scribe Richard Matheson (adapting the Dennis Wheatley novel), creates a strikingly handsome period piece dripping in dread as Richleau and Mocata battle for the souls of two young lovers on both physical and spiritual planes. The action scenes are well handled and the towering Lee cuts quite a figure leaping through hoards of robed devil worshipers to save a sacrificial victim, but the film peaks in an eerie supernatural battle where Richleau and his skeptical party confronts Mocata’s demons while protected in a giant pentagram.

The effects are coarse and dated by today’s standards, but the gorgeous period detail, vivid color, and unsettling imagery create a sinister ambiance and Fisher’s mix of psychodrama and swashbuckling action makes for an engrossing thriller, a life and death struggle between two masters of the forces of light and darkness. It remains one of Fisher’s best films and a classic of Gothic horror from Hammer Films.

It is, believe it or not, rated G, but is best treated as PG or even PG-13 for its dark themes and satanic villains.

On DVD and on SVOD through Amazon Video, iTunes, GooglePlay and/or other services. Availability may vary by service.
The Devil Rides Out [DVD]

The Anchor Bay DVD, which includes commentary by stars Christopher Lee and Sarah Lawson and an episode of World of Hammer, is long out of print and goes for high prices.