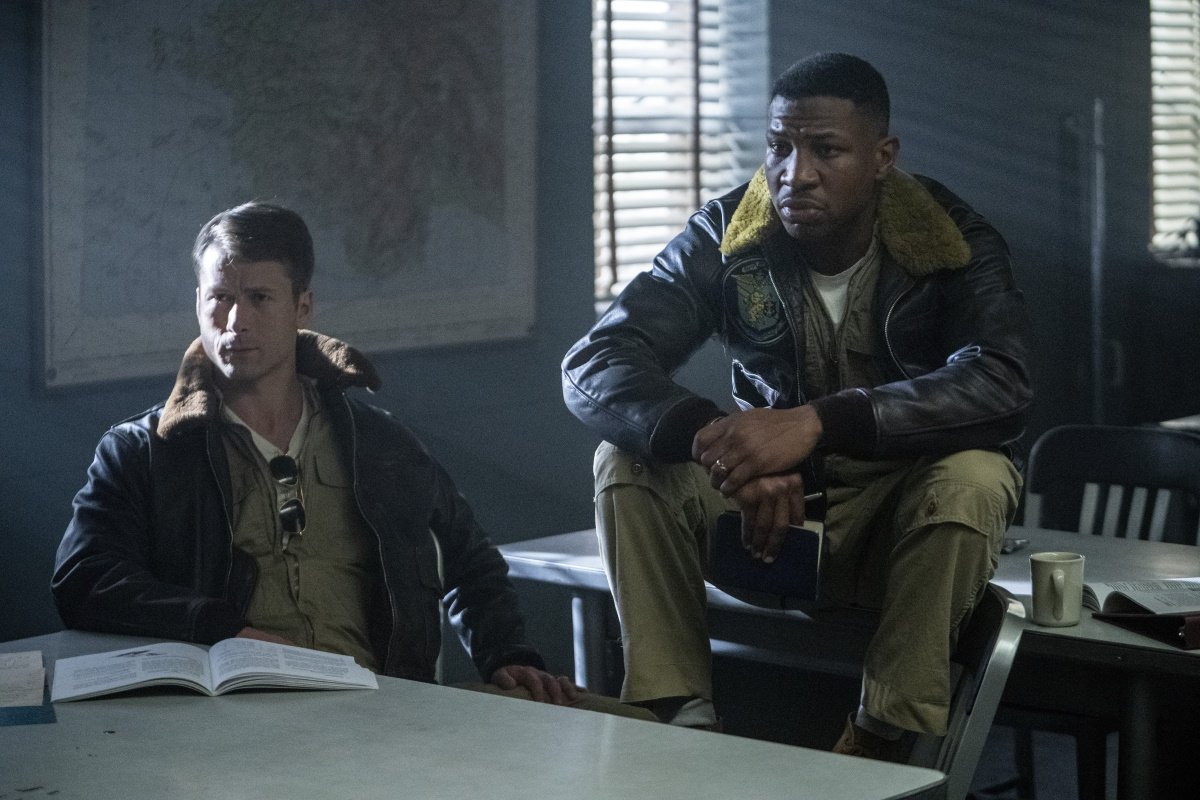 Jonathan Majors plays Jesse Brown, the first Black aviator in Navy history, in “Devotion” (2022, PG-13). Glen Powell costars as his fellow fighter pilot and the friend who had his back as Brown battled racism (institutional and personal) as the first African-American in the newly integrated service. Their friendship grounds Brown’s journey and the heroism that made them heroes of the Korean War in this drama based on a true story. (Paramount+)

“Mayfair Witches: Season 1” (TV-MA), based on Anne Rice’s best-selling “Lives of the Mayfair Witches,” stars Alexandra Daddario as a young neurosurgeon who discovers she is heir to a family of witches and traces her family tree back to New Orleans. This Gothic supernatural soap opera also stars Jack Huston, Tongayi Chirisa, and Harry Hamlin costar. New episodes on Sundays. (AMC+)

A young couple (Anna Konkle and Jermaine Fowler) preparing to start their own family become pariahs when they accidently drop their friend’s newborn while attending a tropical wedding in the comedy “The Drop” (2022, TV-MA). (Hulu)

A prequel to the “Scooby Doo” series, the animated “Velma: Season 1” (TV-MA) explores the origins of Velma Dinkley (voiced by Mindy Kaling) and her crime-solving friends before a certain Great Dane joined the team. The humor is decidedly not for kids. New episodes on Thursdays. (HBO Max)

Award-winning filmmaker Hirokazu Kore-eda is producer, showrunner and co-writer of “The Makanai: Cooking for the Maiko House: Season 1” (Japan, TV-14, with subtitles), adapted from a popular manga about two best friends whose dreams diverge as they navigate the Geisha world of Kyoto. (Netflix)

Classic pick: Henry Fonda stars as the lone holdout in a jury room in “12 Angry Men” (1957), Sidney Lumet’s film of the Emmy-winning television play that has been revived and reworked for decades on both stage and screen. (Paramount+)

Rob Lowe stars in “Dog Gone” (2023, TV-PG), a family friendly adventure based on the true story of father and son’s search for a family dog lost on the Appalachian Trail.

International passport: a mother looking for her missing daughter finds support from other women stonewalled by authorities in their respective searches in “Noise” (Mexico, 2023, TV-MA, with subtitles).

Ruth Wilson stars in “True Things” (2021) as woman whose infatuation with a charismatic mystery man (Tom Burke) sends her down a dangerous path.

True crime: the docuseries “How I Caught My Killer: Season 1“ (not rated) presents cases where murder victims left clues that helped investigators find the killer.

The second and final season of “Hunters“ (2023, TV-MA) brings the odyssey of a group of Nazi hunters in the 1970s to a close as they search for history’s most infamous villain. Al Pacino returns in flashbacks.

Dwayne Johnson plays a businessman who goes undercover in a drug cartel to his son in “Snitch“ (2013, PG-13).

True stories: “Super League: The War for Football“ (2023, TV-MA) chronicles the efforts of a breakaway soccer league in Europe.

The fourth and final season of “Servant“ (TV-MA) brings the thriller produced by M. Night Shyamalan to its conclusion.

“Pretty Problems“ (not rated), a comedy about couple (Britt Rentschler and Michael Tennant) whose staid marriage gets a jolt on an unhinged weekend with the rich and reckless, won the Audience Award winner at the SXSW Film Festival.

The horror series “Chucky: Season 1“ (TV-MA), originally made for SyFy, finds a new home on AMC+ and Shudder.

Bryan Cranston returns for the second and final season of the political drama “Your Honor“ (TV-MA).

“Detectorists Special” (not rated) revives the easy-going, BAFTA-winning comedy series with a new expedition for the best friends (Mackenzie Crook and Toby Jones) searching for ancient artifacts with metal detectors.

The five films in “Fernando Di Leo’s Italian Crime Thrillers” spotlights the best of the Italian crime cinema autuer, from the violent “Caliber 9“ (1972, with subtitles) to the devastating kidnap thriller “Kidnap Syndicate“ (1975, with subtitles).

“Beyond the Black Rainbow“ (2010, not rated), the debut feature from “Mandy” director, plunges the viewer into the escape of a psychic woman from a secluded commune. (MUBI)