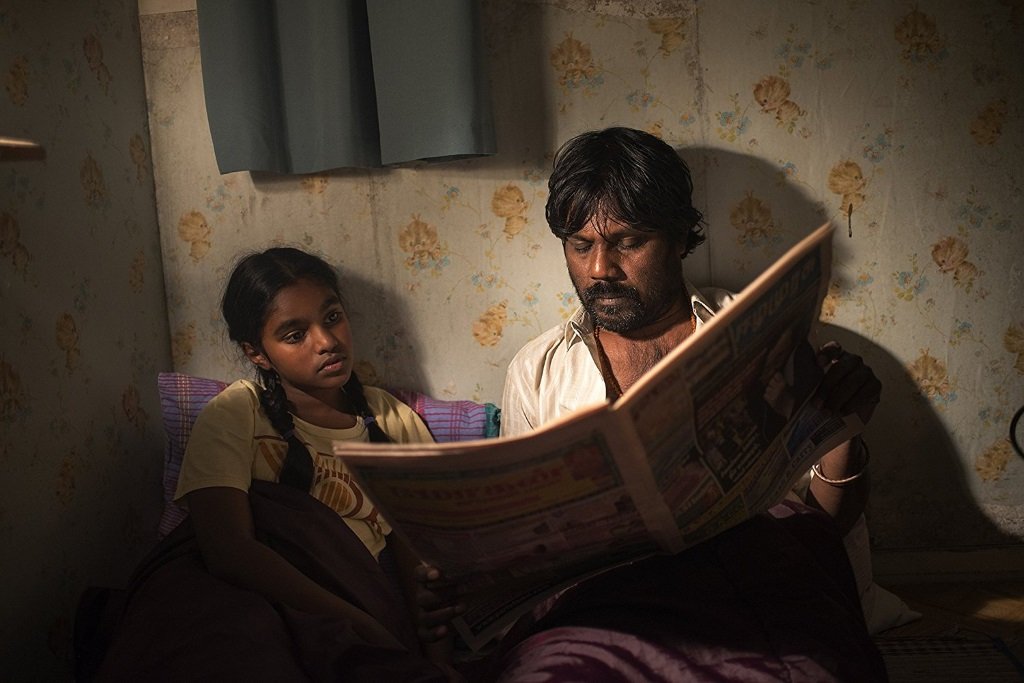 Winner of the Palme d’Or at Cannes 2016 and nominated for nine Cesar awards, Jacques Audiard’s Dheepan (France, 2015) is a moving drama of alienation, assimilation, and survival.

A guerilla soldier (Jesuthasan Antonythasan, a non-actor and former child soldier) in the brutal Tamil Tigers in the dying days of Sri Lanka’s civil war, burns his uniform in the fires that have cremated his fallen fellow fighters and flees the country with a new identity: Dheepan, the father of a (deceased) displaced family. He has to continue the pose with his “wife” Yalini (Kalieaswari Srinivasan) and nine-year-old “daughter” Illayaal (Claudine Vinasithamby) when they are evacuated to Paris and placed in an impoverished suburb where he works as caretaker to apartments overrun with drug gangs.

The three are more like business partners than family as they settle in to their new existence. Yalini wants to leave for London, where she has cousins and at least speaks a little of the language. Illayaal has picked up enough French to interpret for the adults but is shunned by the other kids at school and utterly miserable with two adults who pretend to be parents but fail to provide even the least emotional support. Dheepan is focused on maintaining their cover and keeping his head down, but he has no interesting in acting like a father. Until Yalini gets a job cooking and cleaning for the frail father of a local drug slinger (the money is too good to pass up) and Dheepan agrees to help out with Illayaal, discovering a dormant paternal side that inspires Yalini to invest a little more of herself into the family.

All this plays out against a different kind of war zone. Their little pocket of this suburban Paris slum is occupied by a drug gang that maintains a wary co-existence with the civilians. When drug violence erupts in the complex, Dheepan’s past reasserts itself with a vengeance: part protective family man, part guerrilla veteran roused to action, but his stand against the soldiers is powered by PTSD and he risks losing his new life in trying to protect it.

Dheepan is a portrait of the living in the urban war zone of poverty and crime as seen through the eyes of survivors of real warfare, a drama of outsiders dropped into a new culture and struggling to assimilate, and a touching story about strangers becoming a family. And be assured that Audiard isn’t interested in leaving us with tragedy. This story is invested with hope for the future.

Rated R for violence, language and brief sexuality/nudity, in Tamil and French with English subtitles.

Add it to My Stuff on Hulu

The Criterion DVD and Blu-ray editions feature commentary by director Jacques Audiard and co-screenwriter Noé Debré (in French with English subtitles), video interviews with Audiard and actor Antonythasan Jesuthasan, and deleted scenes, plus a foldout insert with an essay by critic Michael Atkinson.