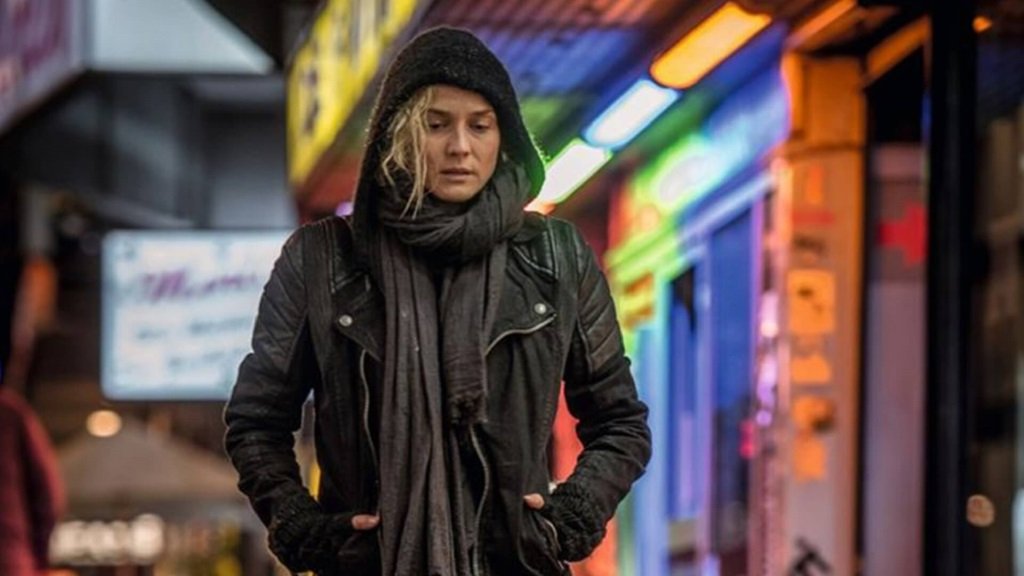 Director Fatih Akin, a German filmmaker of Turkish heritage, likes to dig deep into raw emotion and conflict, both personal and cultural. In the Fade (Germany, 2017) takes on the rise of white nationalism and domestic terrorism through the ordeal of a young widow grieving over the brutal bombing murder of her family.

Diane Kruger won the Best Actress prize at Cannes for her performance as Katja, the German wife of a Turkish immigrant and former gangster turned tax consultant, travel agent, and role model for the straight life (Numan Acar). Katja witnesses the bomber, a young, white woman – “As German as me,” she tells the cops – but they would rather assume it’s gang related… until a tip leads them to young Neo-Nazi couple with a bombworks in their garage.

Akin neatly slips a provocative theme beneath the crime drama turned revenge thriller. The default assumption of practically every white character in the movie (including Katja’s own parents) is to blame the Turkish victim, yet an elderly German widower testifies against his own son, choosing justice and decency over paternal instincts to fight the hateful ideology that poisoned his country decades before. The fear of Germany’s past returning echoes through these scenes.

It’s an emotional odyssey in three acts, a story of grief and rage and revenge in the modern Germany of weaponized racism, and Kruger powers it with a ferocious performance as Katja. Barely hanging on in her grief, she spirals into depression and despair and her emotions turn her world gray and rainy, a constant downpour that (in a beautiful moment right out of In Cold Blood) cries for her when she has no more tears. Her anxiety and slow-burning anger during the trial turns to fury and finally vengeance and Kruger’s transformation through her stages of grief is often unexpected but always mesmerizing and convincing. Her journey is admirably discomforting and the film is ultimately devastating, a world upside down.

In German and Turkish with English subtitles.

, iTunes, GooglePlay, Vudu, and/or other services. Availability may vary by service.
In the Fade [Blu-ray]

In the Fade [DVD]