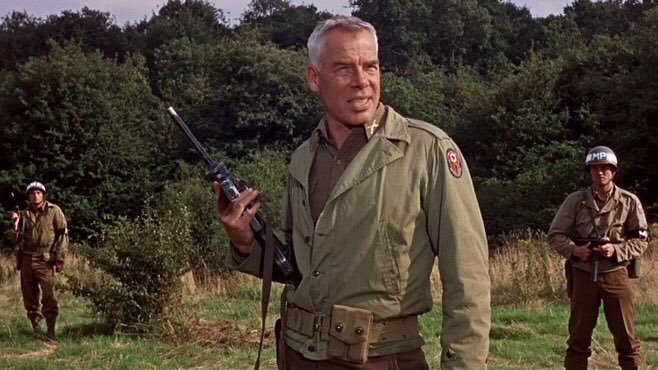 The 1960s were full of big budget wartime caper-style films—The Great Escape, Where Eagles Dare, Kelley’s Heroes, just to name a few—but none of them have the brawny machismo and wily bad boy gusto of The Dirty Dozen (1967), Robert Aldrich’s testosterone-fueled tough guy classic.

Lee Marvin is the hard-as-nails Major who is “volunteered” to wrestle the wills of twelve military convicts—deserters, losers, homicidal psychos—into a commando unit. The boot camp is tough enough with a crew of noncomformists and nothing-to-lose volunteers but their objective is the very definition of a suicide mission: parachute deep into occupied France during World War II and take out a retreat filled with high ranking Nazi officers.

There’s action aplenty and male bonding under fire, but with a real dark side: Marvin’s final solution just seems nasty, not the way we’re used to seeing American heroes behave on the screen. But then again, some of these volatile, reluctant heroes are bump away from detonation.

Call it the ultimate guy flick with a cast just this side of macho heaven. Charles Bronson, Jim Brown, Telly Savalas, Clint Walker, and John Cassavetes (at his smart-mouthed best) stand out among the titular dozen, which also includes singer Trini López and then-rising star Donald Sutherland.

Robert Ryan is a dubious Colonel determined to put the unit in its place, Ernest Borgnine, Ralph Meeker, and George Kennedy are veteran officers doing their best to support the Hail Mary mission, and a very wry Richard Jaeckel is Marvin’s right hand man.

It was nominated for four Academy Awards and won for its sound effects.

On Blu-ray and DVD from Warner Bros. Home Video. The Blu-ray and 2-Disc Special Edition DVD include commentary from cast members Jim Brown, Trini Lopez, Stuart Cooper, and Colin Maitland plus producer Kenneth Ryman and novelist L.M. Nathanson and others, an introduction by Ernest Borgnine, four featurettes, and the made-for-TV sequel The Dirty Dozen: Next Mission (1985), with Lee Marvin, Ernest Borgnine and Richard Jaeckel reprising their original roles and Ken Wahl, Larry Wilcox and Sonny Landham among the new recruits.