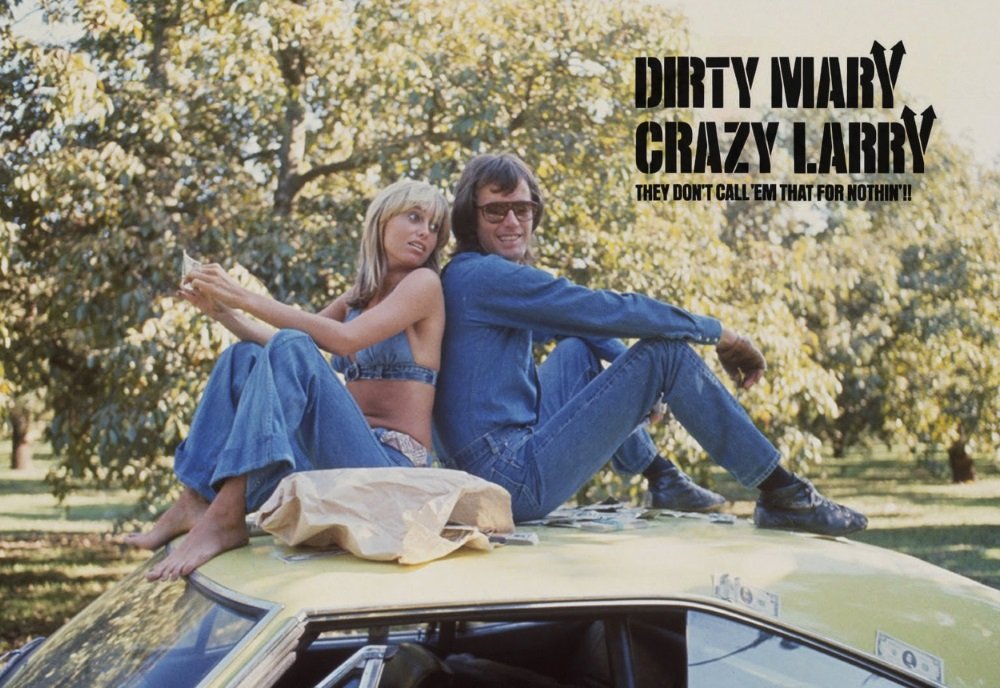 Dirty Mary Crazy Larry (1974) – Peter Fonda is all testosterone and irresponsible arrogance as Larry, a former race car driver who plots a supermarket heist with his devoted, more level-headed mechanic (Adam Rourke). Susan George is pure devil-may-care sexual firecracker as wild child Mary, who takes shotgun on their getaway because she doesn’t have anything better to do, alternately feeding off the thrills and impulsively sabotaging their getaway with tantrums and pouty tit-for-tat pranks. The sparks are genuine, but they are a truly combustible pair bound to explode.

Directed with equal energy by British director John Hough, whose lean, high-powered action scenes are energized by the dynamic, almost child-like performances of his thrill-addicted characters, it’s a classic of seventies speed cinema, where car chase and stunt films were really about rubber hitting—and leaving—the road. Cars screech, metal collapses upon impact, and there’s never any question that it’s all really happening on screen. Vic Morrow leads the pursuit as a single-minded lawman determined to stop their getaway.

Rated PG, if you can believe it. It would be at least a PG-13 today.

, iTunes, GooglePlay and/or other services. Availability may vary by service.
Dirty Mary, Crazy Larry / Race With The Devil [Blu-ray]

The Shout! Factory DVD and Blu-ray releases are a double feature with Race with the Devil, another seventies cult movie starring Peter Fonda on the road. Dirty Mary Crazy Larry features commentary by director John Hough with moderator Perry Martin and the succinctly made retrospective featurette “Ride the Wild Side” with Hough and stars Peter Fonda and Susan George. Race With the Devil features commentary by producer Paul Maslanski and actress Lara Parker with moderator Perry Martin and the featurette “Hell on Wheels.” Both include trailers, TV spots and radio spots. Each film on a separate disc.