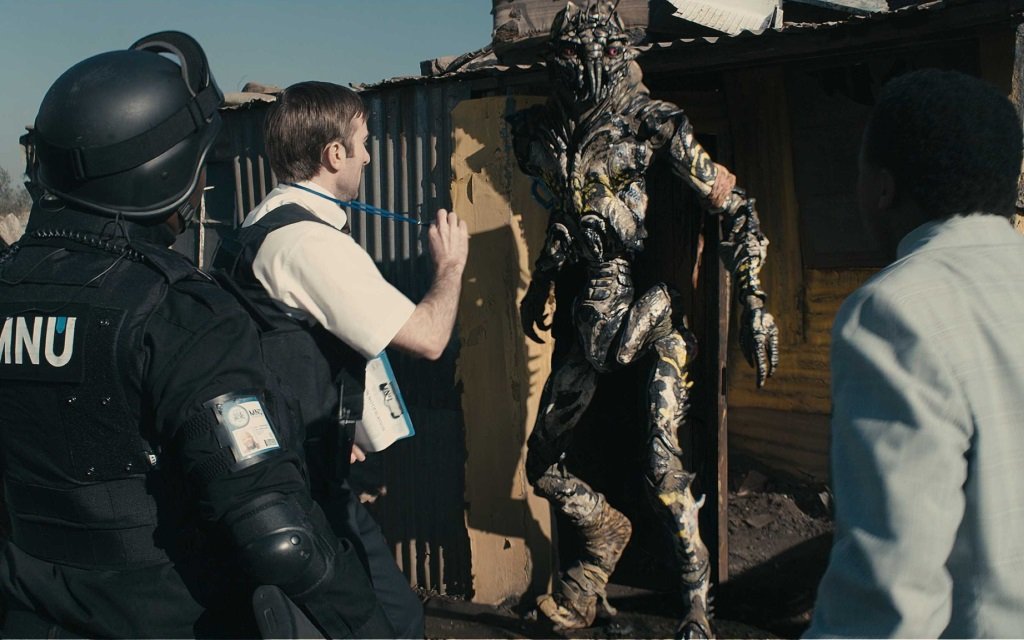 The aliens arrived almost thirty years ago, their crippled spacecraft hovering to a halt over Johannesburg, where it remains floating over the city. That defining image hovers over the entirety of District 9 (2009), a savagely whipsmart satire of first contact with an alien species that has been reduced to repressed immigrant population stranded in the slums of South Africa.

The debut feature from Neill Blomkamp (with Peter Jackson producing) turns what should be an ominous and amazing transport from another world into something else entirely: neither threat nor utopian promise, merely an annoyance to the local human population that can’t look to the sky without seeing that reminder of an unwanted subculture that has been segregated and shunted to the slums. The aliens have become the underclass.

What could be an unbearably bleak and cynical portrait becomes a ferociously entertaining piece of science fiction thriller in the hands of Blomkamp, who frames the story through the bumbling obliviousness of amiable idiot civil servant Wikus Van De Merwe (Sharlto Copley), a grinning administrative functionary promoted far beyond his pay scale and his abilities. All the better to run the Department of Alien Affairs as a front for outsourcing millions in private security and turning the concentration camp inmates (sorry, that’s segregated population) into research subjects for the weapons division.

Along with all of this is a story of alien resistance, an action-movie manhunt, an urban crime thriller, a buddy movie, a convincingly inhuman conspiracy, even an increasingly touching love story, all of it swirled together in a science fiction tale set against the dusty landscape of a desert shantytown slum and punctuated with all the alien bug imagery and splattery explosions of human bodies blown apart by alien energy cannons that a genre junkie could want. It’s not hard to see what sparked producer Peter Jackson to the film.

Funny and ferocious, cynical and satirical, District 9 is both ingeniously clever and reflectively thoughtful, a science fiction thriller that bubbles with social commentary. Almost every element reverberates with painful satire—national security outsourced to a private army, social policy designed by a multinational corporation, the complicated cultural interface of a forced (and illegal) relocation run by a criminally underqualified civil servant whose promotion is a matter of connections—but it’s all in the details. Given the promise of this first feature, it’s all the more disappointing that Blomkamp has yet to make another film even half as good as this.

It was nominated for four Academy Awards, including best picture and best adapted screenplay (it was officially based on a short film).

The Blu-ray and DVD editions include commentary by director/co-writer Neill Blomkamp recorded before the film’s release (and the subsequent cascade of rave reviews), which creates a different context for his talk. It’s a modest yet proud discussion of where the film came from, how his ideas arose and evolved in the making of the film and how he absorbed the technical challenges into his creative process. And he’s up-front about the elements that he’s unsatisfied with; “I kind of feel like I could have done better with a lot of this stuff,” he says during one of the chaotic shoot-out scenes. The half-hour “The Alien Agenda: A Filmmaker’s Log” is a well-produced three-part documentary that explores the film from inspiration to post-production (where did those great sounds come from? You’ll see and hear the details here), and there are 22 deleted scenes (totaling about 22 minutes).

Exclusive to the “2-Disc Edition” and Blu-ray edition are four additional featurettes on various elements of the production (such as “Metamorphosis: The Transformation of Wikus,” which chronicles the various stages of his genetic evolution, all of it accomplished with prosthetics and practical appliances) and the Blu-ray includes even more exclusive supplements: an interactive map and schematics (a time waster, to be sure, but a very well-produced one with lots of sketches, 3-D models and film footage), a PlayStation 3 game demo, BD-Live interactive supplements and a digital copy of the film for portable media players.