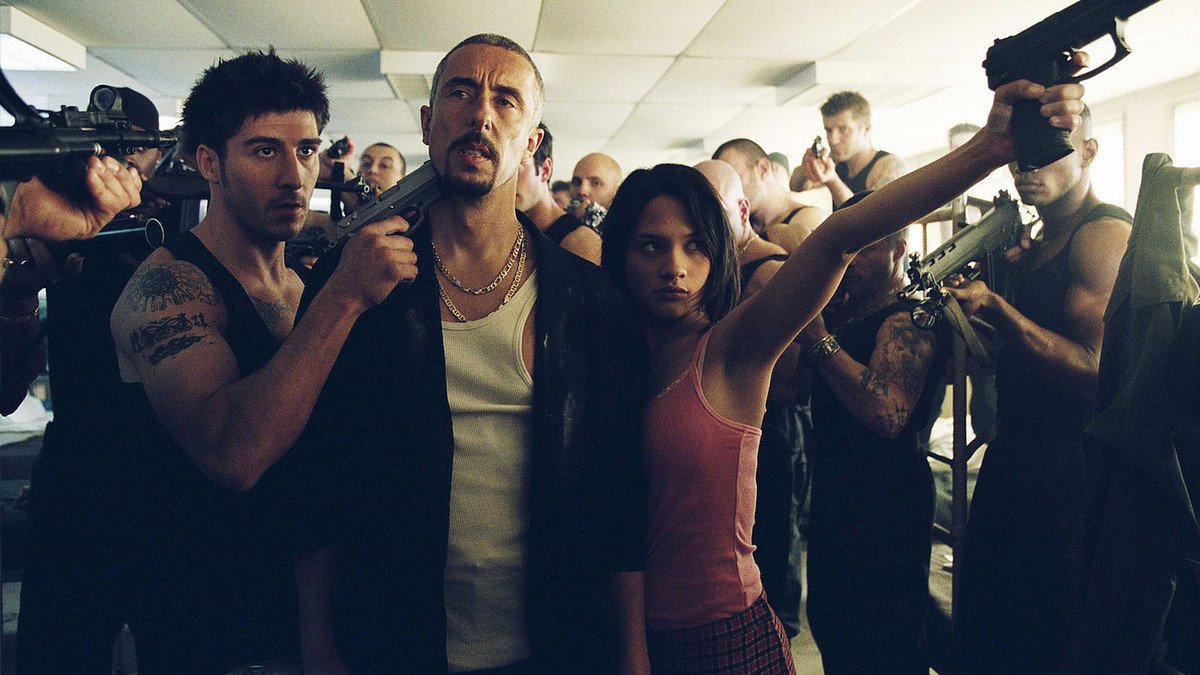 District B13 (France, 2004), Pierre Morel’s twist on Escape From New York set in a near-future Paris, is a lean, clean, B-movie action machine fueled by adrenaline and indignation.

Urban athlete David Belle, one of the creators of the extreme sport known as Parkour, stars as ghetto hero Leito and he set the tone, the pace, and the attitude of the film in his entrance, charging through the alleys, scrambling over walls, leaping from fire escapes to rooftops to windows, in an acrobatic chase through his crumbling city that would impress Jackie Chan. His slum neighborhood has been walled off from the rest of the city and allowed to descend into a third world jungle run by drug lords and gangster and he steps up as protector of the oppressed and defender of the outcast.

Leito is tossed together with kick-ass undercover cop Damien (former stunt man Cyril Raffaelli), an earnest straight arrow who tries to arrest Leito for rocking the boat, to disarm a stolen atomic bomb in the heart of the gated slum. “Let it flow,” cries Leito, the seat-of-his-pants improviser, and it does. They practically dance through the urban decay in swift and steely chase scenes. It’s great to see action stars cast for their moves—their grace in motion is thrilling—but they also have the charisma to pull off the characters.

Behind the action is an overheated socio-political commentary on the ghettoization of neighborhoods into impoverished prisons, abandoned by civil authority. The straight-faced outrageousness is part of the film’s charm, while the stripped down aesthetic, driving pace, and impressive action sequences are the film’s charge. Director Pierre Morel, working from a script by producer Luc Besson, cuts it all down to the essentials: speed, stunts, and the kind of human special effects that technology can’t deliver. The original French title, by the way, is Banlieue 13.

District 13: Ultimatum (France, 2009) reunites stars Raffaelli (now an ultra-serious and insanely dedicated police captain) and Belle (the acrobatic Robin Hood of the slum) to fight the power once more. There’s plenty of absurdly outrageous action (love Raffaelli going undercover in drag) but director Patrick Alessandrin never captures the visceral charge or fluid momentum of the original and the film trades the distinctive martial arts and urban gymnastics that defines the film for more generic action spectacle and CGI-laden effects.

Both rated R and in French with subtitles.

Add to My Stuff on Hulu or watch for free on Kanopy, which is available through most public and college library systems.

, iTunes, GooglePlay and/or other services. Availability may vary by service.
District B13 [DVD]