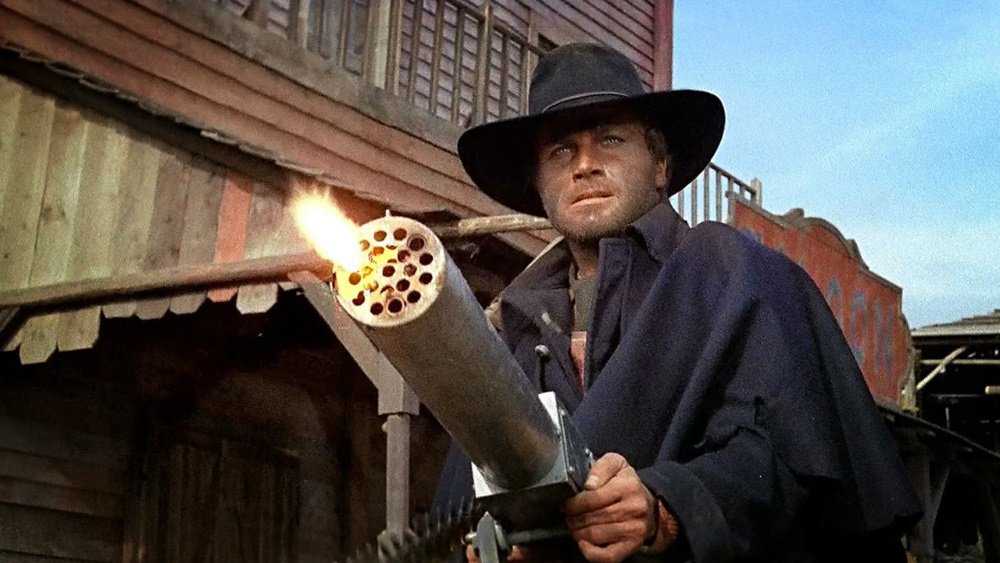 Along with Sergio Leone’s Clint Eastwood trilogy, Sergio Corbucci’s Django (1966), starring Italian hunk Franco Nero as the gritty mercenary who drags a coffin behind him, was one of the films that set the tone and attitude and style spaghetti westerns.

Wandering a desolate desert of ghost towns and miserable frontier dropouts under the bootheels of brutal gangsters, Django mows down armies of bad guys with his own machine gun (which he brandishes in classic two-fisted tough guy fashion—from the hip), stages a daring gold heist from a Mexican military fortress, and plots to double cross his bandito partners. Caught between American white supremacists and Mexican bandidos, Django is a hero by default.

Corbucci, who co-wrote the story, fashions an unrelentingly violent tale of rival gangs squeezing the life out of a muddy, bloody border town, reveling in the sadism of the genre. The film opens with a woman strung up and lashed by a group of lascivious bandits, only to be saved by even more demented gunmen who plan to burn her alive. Quentin Tarantino, a fan of Italian westerns in general and Django in particular, borrowed the scene where a vindictive General slices the ear off a corrupt preacher for Reservoir Dogs.

While not as stylish as Leone’s operatic epics, it helped launch a fetish for outlandish weaponry and gimmicks and pushed the borders of violence into all new territory; the film was banned outright in England and cut in the US. It also spawned dozens of unofficial sequels, none of them with Franco Nero (at least until 1987), and almost none them even featuring a character by the name of Django.

and other services. Availability may vary by service.
Django [Blu-ray]

It was remastered from the camera negative (which has seen its share of wear and tear) for the Blu-ray release by Blue Underground. There is some video noise but the image is sharper and the colors stronger than any previous release. The Blu-ray and DVD releases includes an interview featurette with star Franco Nero and assistant director Ruggero Deodato, the 2002 short “The Last Pistolero” and the 1968 documentary “Western, Italian Style” among the supplements.