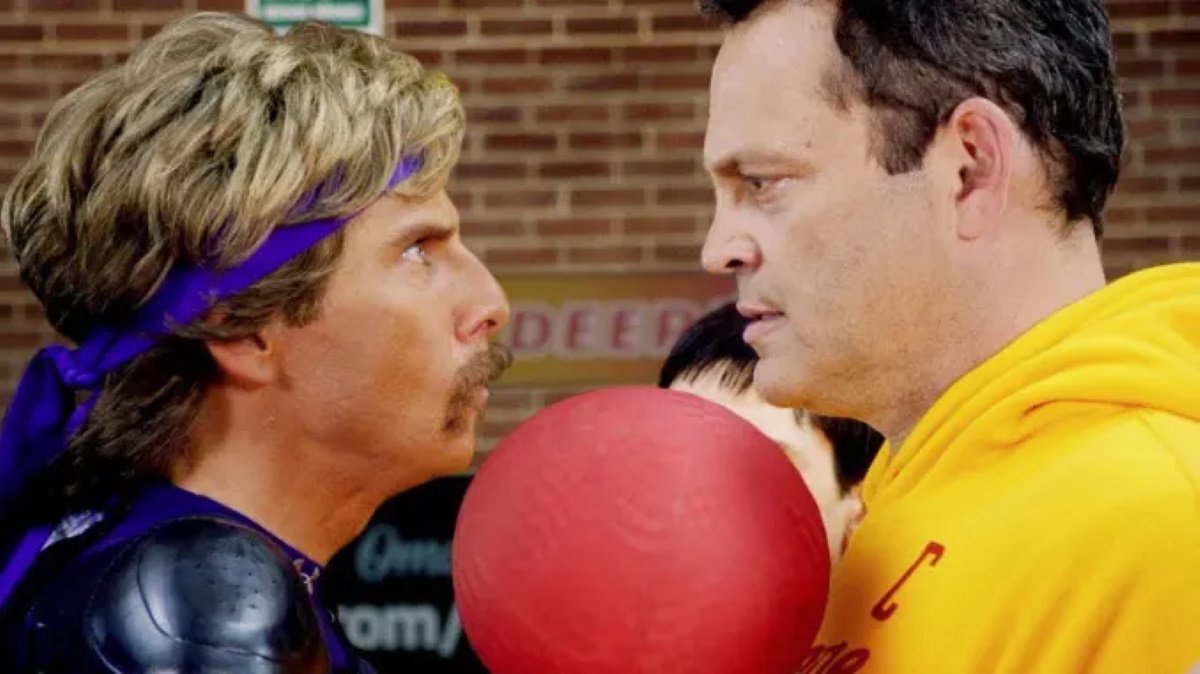 Once a punchline in teen movies and nostalgia-laden TV shows, the gym class nightmare known as dodgeball is made its bid to be taken seriously (sort of) as a real sport in the 21st century.

It’s hard to tell if Rawson Marshall Thurber’s farcical sports spoof Dodgeball: A True Underdog Story (2004) is visionary, lucky, or simply inevitable. It may not be original, but it’s often shamelessly funny.

The flip-flop casting helps sell it. Vince Vaughn, so good at vain and vaguely menacing, gets to play the likeable den mother to a clientele of amiable losers as underachieving schlub Peter La Fleur, the everyman owner of the failing Average Joe’s Gym. Ben Stiller plays his nemesis White Goodman, a supercilious health club magnate who plots to foreclose on Peter’s bankrupt business. Average Joe’s only hope is the $50,000 purse at the national dodgeball finals in Las Vegas. Peter gathers his underdog team of gym regulars (their team motto: Aim low) and White puts together a steroid-enhanced team of bullying bruisers to make it personal.

First time writer/director Rawson Marshall Thurber makes no pretense at satire or creative surprises and he isn’t above lobbing a gag at the groin for a laugh or three (or ten). But he has the good sense not to dwell on the gags, instead allowing them to linger in the background while the film moves along. The laughs come from a script full of non-sequiturs and dead-end metaphors sputtered by a preening Stiller (who, under feathered hair and a ridiculous Fu Manchu mustache, does his best narcissistic moron act since “Zoolander”) and creatively crass insults growled by a grizzled Rip Torn.

There’s nothing new to the old game but snazzy outfits, slick accoutrements, and better banter, but like his misfit heroes, Thurber aims low and hits his mark.

The Blu-ray and DVD feature commentary by writer/director Rawson Marshall with actors Ben Stiller and Vince Vaughn, deleted/extended scenes and an alternate ending with optional commentary by Marshall, two featurettes, and bloopers and deleted scenes.