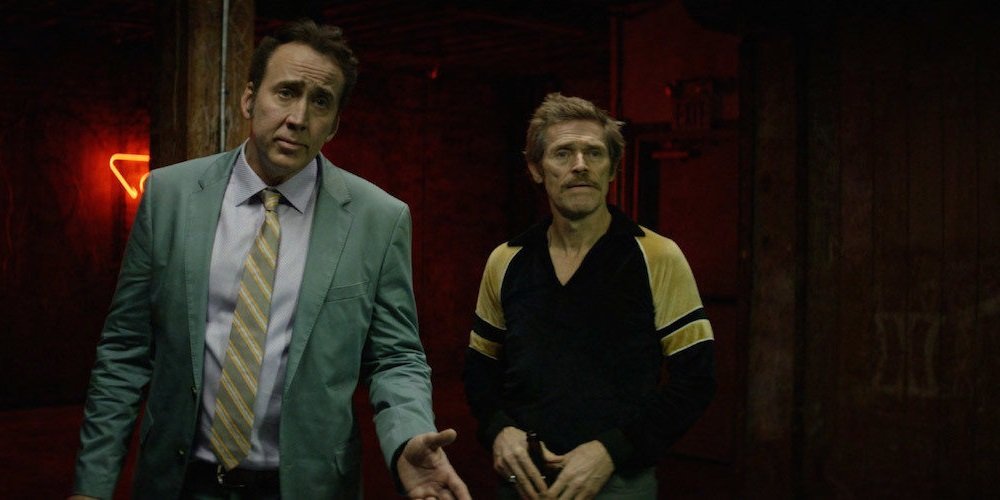 Dog Eat Dog (2016) – Paul Schrader brings his intelligence to a squalid pulp crime drama of small-time thugs who impulses and instincts manage to screw up what should be a simple job.

Nicolas Cage is Troy, the ostensible ringleader of the trio, recently paroled and celebrating his release at a strip club with fellow ex-cons Mad Dog (Willem Dafoe), appropriately nicknamed thanks to an emotional hair-trigger and periodic rage-storms, and Diesel (a taciturn Christopher Matthew Cook) when they decide they need a big job with real money. So they take kidnap the infant son of a drug dealer who owes his boss $4 million. What could go wrong? With these guys, what could go right?

It’s based on a novel by career criminal-turned-pulp novelist Edward Bunker, who was an influence on Tarantino, and there’s a gallows humor to the violent story of deluded thugs at the bottom rungs of the criminal underworld. Cage plays Troy as a guy who thinks he’s savvy about the way things work but he’s fumbling around, playing the experienced professional so well he even fools himself into thinking he has things under control. These guys can’t even control their own impulses.

The shadow of doom hangs over the film from the first scene, a prologue where Mad Dog earns his name twice over. It’s a brutal scene played for a strange kind of grim humor that’s a little tone deaf. It’s not the only one, but Schrader is true to the material. This is a nihilistic film about nasty folks on a self-destructive path, a little too familiar by now but still more interesting than your usual crime-gone-bad films thanks to Bunker’s sensibility and Schrader’s interest in the self-destructive instincts of his characters. And to thanks to the way Dafoe embraces his out-of-control screw-up, from his rampages to his weepy contrition. His regret is genuine, if not necessarily for the best of reasons, and his confession is a kind of naked reckoning by way of male bonding in the worst support group in history. Dafoe kills in that moment, a man utterly committed for as long as his low attention span can handle it, and then he’s back to the emotional yo-yoing of a street thug with the maturity of a child. Who would have thought that Cage would give the restrained performance in this crew?

and other services. Availability may vary by service.
Dog Eat Dog [DVD]

The Blu-ray and DVD editions include commentary by director Paul Schrader, a video introduction by Nicolas Cage, and an audience Q&A with Schrader and Cage from the BeyondFest screening.