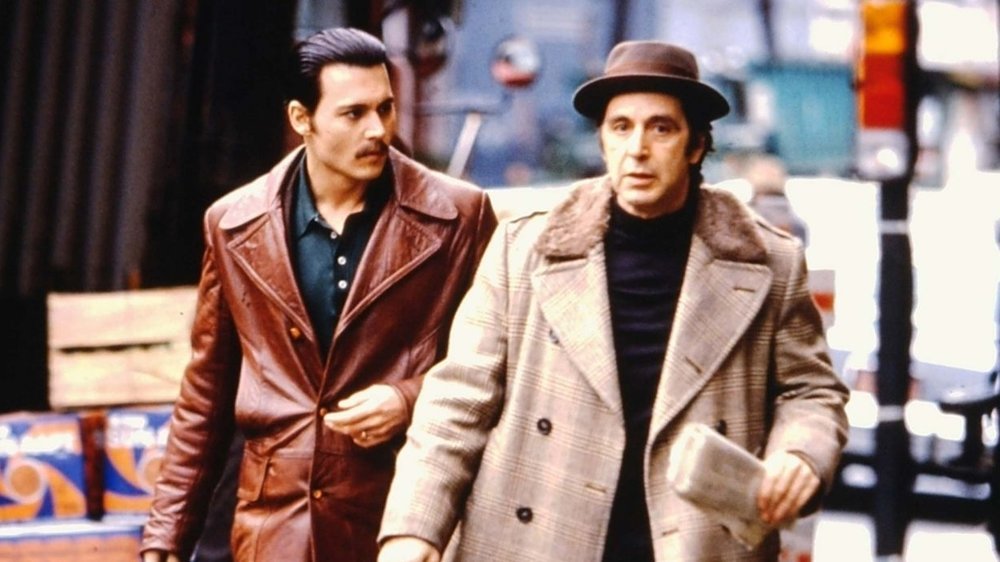 Al Pacino’s heartbreaking performance of a big-shot wannabe anchors Donnie Brasco (1997), an unusual tale based on the true story of a low level mobster and the undercover FBI agent (Johnny Depp) who becomes his best friend.

Pacino helped redefine the American screen gangster as Sonny Corleone in the Godfather films. As Lefty, a low-level mobster still struggling to make a mark, he’s a man who has seen his ambitions smothered. Under his bravado and wise-guy posturing lies a sad, insecure little man who watches deals pass him by.

Depp grounds this dark twist on the buddy tale with a passionate friendship that overshadows duty. As Donnie Brasco, a cover created by the FBI to infiltrate the gang, his loyalty to Pacino’s wise guy ultimately blurs the line between his separate lives on both sides of the law, and he loses all perspective as he discovers he has a knack for crime and slowly succumbs to the underworld pose he’s been faking for so many years. It’s a testament to Depp’s talent that he holds his own on the screen with Pacino, and to his generosity as an actor that he helps Pacino deliver his best performance of the decade.

British filmmaker Mike Newell has an instinctive feel for character and a sharp eye for composition. He etches an indelible portrait of an FBI agent torn between loyalties and a loser mobster doomed to play the also ran, and he populates the world around them with vivid mob personalities (Michael Madsen, Bruno Kirby, and James Russo play the younger members of Lefty’s crew) and a richly realized world of small-time criminals pretending they are big-time players in a culture that knows better.

Anne Heche costars as the wife of Joe Pistone, the real-life identity of the FBI agent whose allegiance slips while undercover.

It earned an Oscar nomination for Paul Attanasio’s screenplay, which he adapted from the book by Joseph D. Pastone and Richard Woodley.