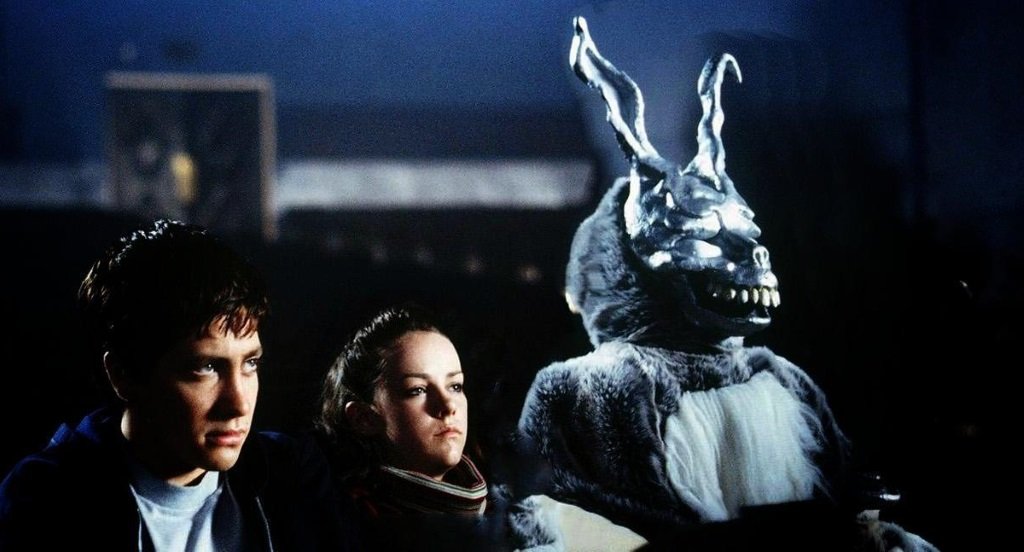 Donnie Darko (2001) – Donnie Darko (Jake Gyllenhaal) is an otherwise normal rebellious, angry kid who slumps and frumps his way through the confusion of his life. He just happens to have a little more confusion than the most of us, much of it caused by visitations from a demonic looking six-foot rabbit named Frank who tells him that the world is going to end in 26 days.

In Richard Kelly’s visually imaginative and intellectually challenging debut film, Donnie is a contemporary Holden Caulfield in a grim and glorious world of nightmares and dreams: jet engines fall from an empty sky and alternate realities and time travel are as present as teen angst and high school melodrama. At least they are to Donnie, who can suddenly see the fabric of fate in the ectoplasmic trajectories that lead us to our destiny.

But it’s also a frustrating world where fatuous platitudes are offered in place of practical advice, where censorship hangs over dedicated teachers like a sword of Damocles, and where teenagers aren’t trusted to handle the complexities of the world even through the mirror of literature and philosophy.

It’s hard to tell (let alone explain) exactly what it’s all about—schizophrenia, dream fantasy, or some David Lynch/Philip K. Dick mind warp drama wrapped in teenage alienation—but that’s part of its fascination. Kelly winds so many ideas, so many questions, and so much marvelously strange experience through this ambitious film that you can forgive the few loose ends and overdone caricatures amidst the richness.

Jena Malone is the new girl in school who takes a shine to the weird, darkly oddball Gyllenhaal, Drew Barrymore spins gold from a small role as an optimistic high school teacher, and Patrick Swayze is downright creepy as an unctuous motivational speaker oozing faux sincerity, but Mary McDonnell and Holmes Osborne (as Gyllenhaal’s emotionally stifled parents) are the unsung heart of the film.

Donnie Darko was a box office flop and a home video cult phenomenon. Teens and tweens connected with its inarticulate hero and the underground swell in popularity inspired Kelly to revisit the film and restore scenes and ideas he cut to shorten and streamline the film for its original theatrical release. The longer Director’s Cut attempts to “explain” Donnie’s odyssey more clearly, which is not always to the benefit of the delirious mystery. But while 20 minutes of additional footage doesn’t transform or even necessarily improve the film, it enriches the characters (I do love the tender new scenes between Donnie and his family).

Both versions are available on home video, but I prefer the original, shorter version, which embraces the mystery and the confusion. But in both versions, the wonderfully weird trip leaves you with meaty questions, both metaphysical and moral, and a journey through time-space that is philosophically invigorating and emotionally intense.

Also on Blu-ray and DVD and on SVOD through Amazon Video, iTunes, GooglePlay and/or other services. Availability may vary by service.
Donnie Darko (4-Disc Limited Edition) [Blu-ray + DVD]

The four-disc Blu-ray+DVD set from Arrow features new 4K restorations of both the original theatrical cut and the Director’s Cut, commentary tracks featuring filmmaker Richard Kelly and others for both cuts, the new documentary “Deus ex Machina: The Philosophy of Donnie Darko,” Kelly’s 1996 short film The Goodbye Place, numerous archival featurettes and interviews, 20 deleted scenes with optional filmmaker commentary, and other supplements.