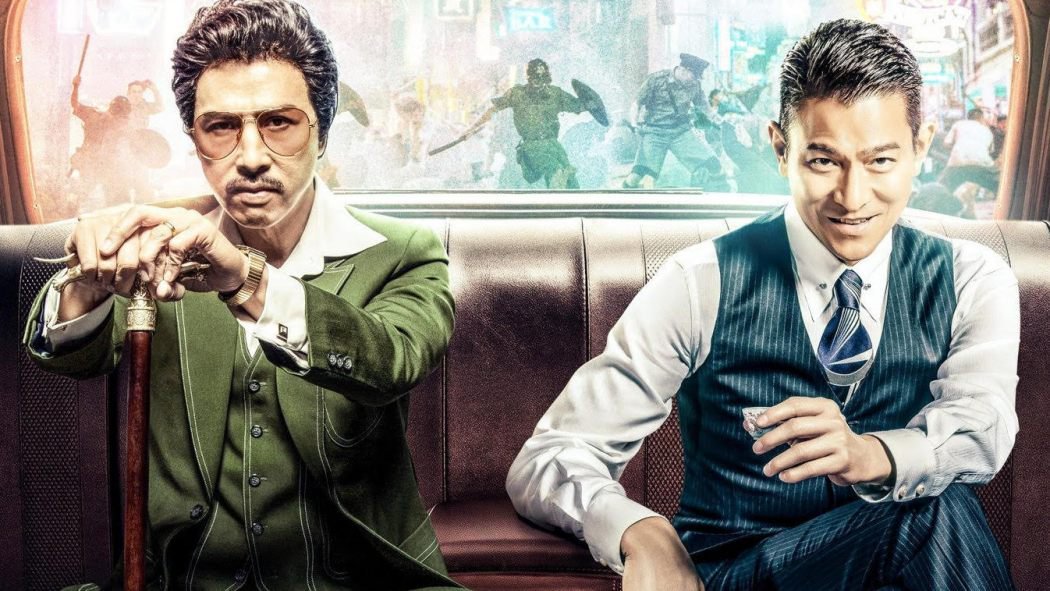 Directed by the insanely prolific Hong Kong action veteran Wong Jing, Chasing the Dragon (China, 2017) is the filmmaker’s crime epic, a historical drama that charts the rise and fall of two notorious gangsters who thrived in the rampant corruption enabled by Britain’s colonial rule of Hong Kong in the 1960s. The title is slang for heroin addiction and looking for the next high but for the two men at the center of the film, it’s about power and money and carving out the island nation’s answer to the American Dream through an insidious partnership between the police department and the underworld gangs.

Inspired by a true story, Chasing the Dragon stars Donnie Yen, the zen master of martial arts action, playing against type as Crippled Ho, the Chinese immigrant who became a drug kingpin, and Andy Lau as top cop Lui Lok / Lee Rock (a role he played in two previous films), who centralized the system of graft as he rose through the ranks. Lau provides the smooth charm as the ambitious cop who bristles under the arrogance and abuse of power by the British officials but knows better than to challenge their rule as he consolidates his control. Yen brings his usual understated warmth as Ho, underplaying the ruthlessness as he builds his power base, and he trades in the grace and majesty of his martial arts style for a scrappy, street-fighting approach. Their story spans more than a decade, from Ho’s arrival in 1963 to the anti-corruption commission tasked with rooting out the systemic corruption in the civil service in 1974, and Yen narrates as Ho with the wistful quality of a nobody who rose to the top with his loyal brothers before it all came crashing down. The film itself isn’t quite so nostalgic for the era, but while it hardly sees its Chinese protagonists as heroes, it shows them fighting for their cut of the plunder looted by the British who occupy their country.

Wong Jing was a splashy but often sloppy filmmaker in the 1980s and 1990s. He delivered spectacle and momentum and humor but was also notably cavalier with character, screenplay structure, and narrative logic in a filmmaking culture that was known for its disregard for such things. There’s far more discipline in Chasing the Dragon (which Wong also scripted) than anything I’ve seen by him before (and admittedly I haven’t seen much of his work in the past decade). I can’t attest to the historical accuracy but I appreciate the classic conventions of brotherhood loyalty that go back to John Woo’s great crime dramas and gangster movie tropes that go back even further to the pre-code underworld thrillers like The Public Enemy, Little Caesar, and the original Scarface. And I love the period detail (great costuming and Yen rocks that mustache) and the recreation of Kowloon, the ghetto “walled city” within the city that even the cops won’t enter. This is Hong Kong’s answer to the Casbah of Pepe le Moko with high rise towers crammed with impoverished residents and a maze of warren-like alleys between the packed-in buildings, so close that they essentially block out the sun. Wong shares directing credit with his cinematographer Jason Kwan, perhaps out of respect for his vivid visualization of this long-gone era.

There’s not much nuance to the film or to the characters (Ho comes off just short of Robin Hood in some scenes and it’s often a shock to see this modest personality show his ruthless side) but the big, bold conflicts give the film the dynamics of classic Hong Kong gangster drama. Wong gives the story an epic scope both visually and narratively and peppers the underworld politics with fight scenes with a scrappy spectacle. That’s enough to recommend this piece of Hong Kong gangster opera.

, iTunes, GooglePlay and/or other services. Availability may vary by service.
Chasing the Dragon [Blu-ray+DVD]

The Blu-ray and DVD from Well Go features original Cantonese and English dub soundtracks and optional English subtitles. No supplements but the Blu-ray edition features a bonus DVD copy of the film.