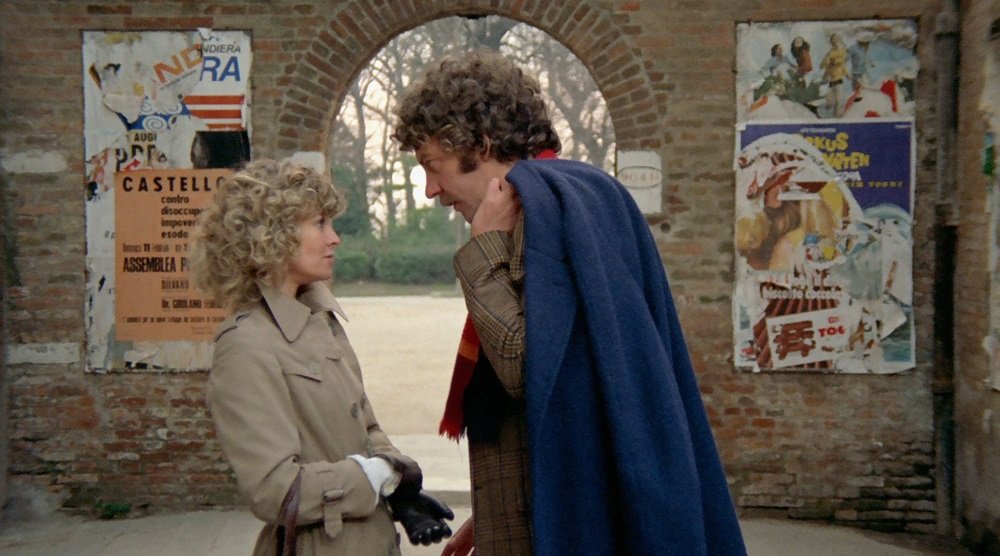 Don’t Look Now (1973), Nicolas Roeg’s mosaic of a thriller, remains a mystery to the end. Set largely in Venice, where the labyrinth of canals and tunnels creates a claustrophobic maze, it’s less about the elliptical story (adapted from Daphne du Maurier’s short tale) than the texture of loss, obsession, and emotional remove. Donald Sutherland and Julie Christie are a married couple who lose their only child, a young daughter, to a drowning accident in a pond on their British estate. John (Sutherland) has a vision of her death, suggested in a blood-red spill across an art slide he’s studying, and that splash of red (the girl was wearing a red raincoat when she died) haunts his consciousness (and the film) like a ghost. Laura, meanwhile, meets a medium in Venice (where John is working to restore church artworks decaying from 20th century pollution) who convinces her that their daughter is still alive.

Most directors who begin as cinematographers favor long takes and camerawork as expressive tools. Roeg is more interested in the collision of images and builds his meanings and moods from connections and suggestions through often dense, impressionistic editing. In his hands, montage is more mosaic than metaphor, puzzle pieces that we put together in ways that create connections from association. Roeg plays with those connections to suggestion meanings beyond logic, but what we believe is insight to the supernatural may in fact be more expressive of John’s state of mind, making sense of loss by seeing echoes in the shadows of Venice.

The imagery is beautiful, to be sure, but also eerie and alienating and discomforting. Shooting in Venice gives Roeg the opportunity to use both the ageless beauty of the old-world churches and piazzas and canals and the mystery suggested in the maze of alleys and bridges and a street plan that can look like an Escher painting the way characters can be so close yet separated by the maze. And the performances by Christie and Sutherland both suggest a deep affection and an emotional distance. The deep scars of loss haunt their every action, even while making love.