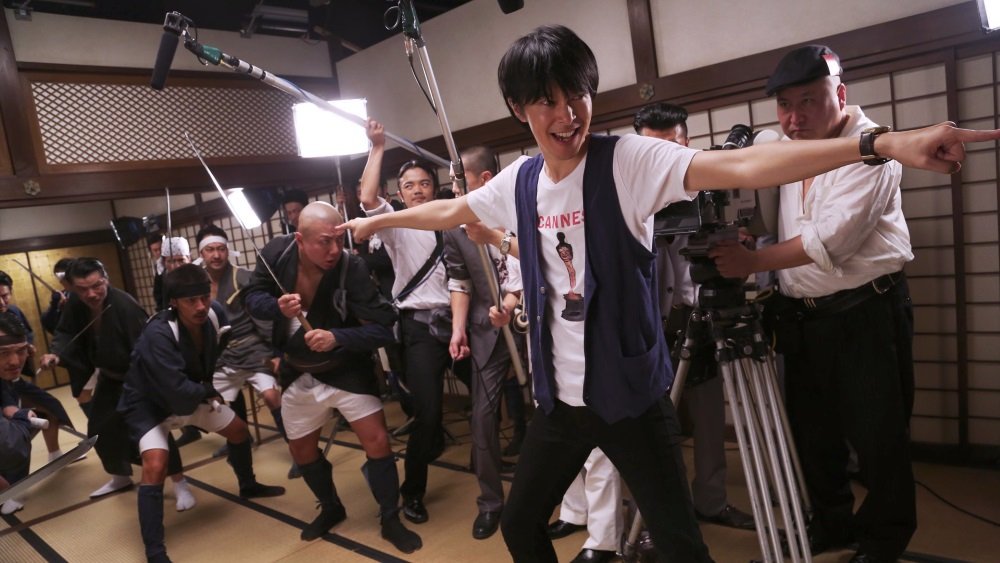 Why Don’t You Play in Hell? (2014, Japan), Sion Sono’s filmmaking freakout about making a movie in the midst of a Yakuza war, is actually far more insane than that description suggests. For one thing, it takes almost 90 minutes to get to that filmmaking part and the sheer absurdity of the plotting twists and motivations that get us there are beyond rational explanation, which is part of the fun. The scenes leading up to it are a mad collision of gang war, teen runaway tale, revenge movie, star-crossed romance, wrong man nightmare, and movie club dream come true for a spirited, tunnel-visioned filmmaking collective. By the time the warring sides are ready for their close-ups, it has become a quest where the gang fight is less about territory than choreography and the sword-wielding soldiers on both sides (because katanas are much cooler than guns) are more conscious of their image than their tactics. It’s all about looking good for the camera.

Sono channels the yakuza madness of Seijun Suzuki and the driving energy and chaotic creativity of Miike Takashi at the height of his powers. The characters are driven by obsession and emotion, not logic, and Sono stirs it with a hearty dark humor and a juvenile, morality-free passion for moviemaking. Even the flashbacks and narrative detours are the equivalent of production numbers and set pieces, small scale bloodbaths as imagined by Busby Berkeley for the Yakuza Follies. Blood spurts in geysers (some of them fountains of liquid, others spattered across the image with CGI, and one scene of candy colored streams of cartoon rainbows) and limbs fly, and in the middle of it scurries a Bruce Lee knock-off in a Game of Death yellow tracksuit swinging a sword or windmilling his nunchucks like it’s a playground game.

This is pure midnight movie, all energy and whimsy and cartoonish displays of violence with yakuza soldiers dressed as samurai swordsmen. It’s hard to tell if this is an attempt at commentary on the slippery ethics of representing violence on film and blurring the lines between reality and representation, or simply Sono giving in to the same unchecked enthusiasm of his absurd filmmaking crew. Their amateur zeal is played for laughs, yes, but Sono’s appreciation for such passion is clear. Why Don’t You Play in Hell? has its own cracked logic but is largely free from any discipline that would focus its wild energy. That could be a warning to some viewers and an invitation to others. Follow your instincts accordingly.

In Japanese with English subtitles.

Also on Blu-ray and DVD, with a press conference and a booklet.
Why Don t You Play in Hell? [DVD + Digital Copy]

Why Don t You Play in Hell? [Blu-ray + Digital Copy]

Sion Sono, Why Don't You Play in Hell?