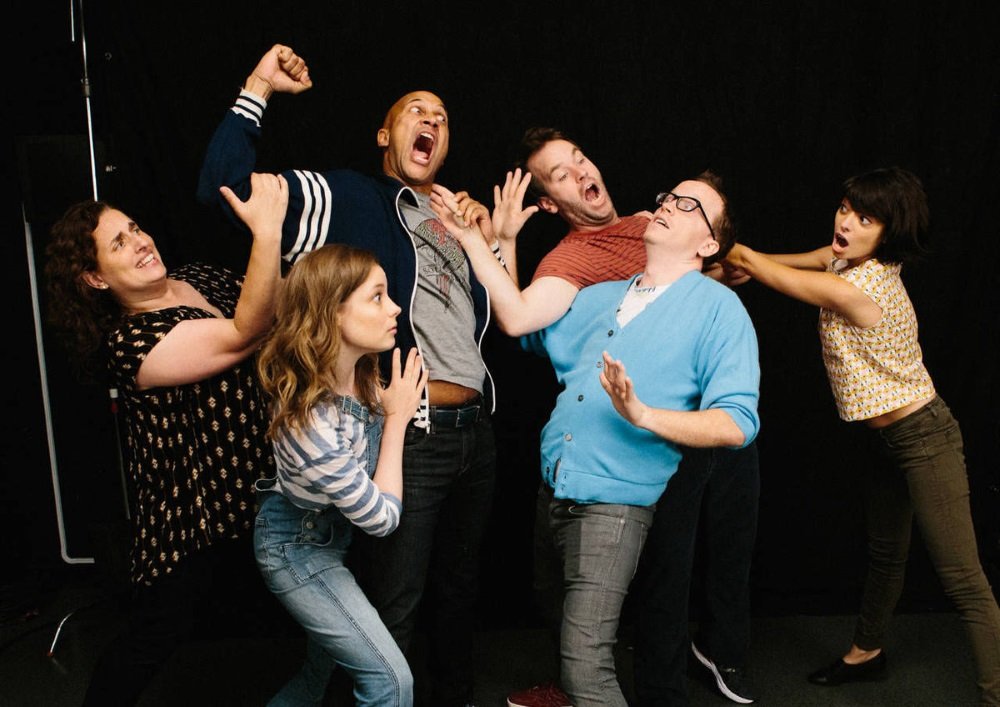 Whether you call Don’t Think Twice (2016) a hilarious drama or a serious comedy, it is a bittersweet story of frustrated dreams and difficult passages of funny people in a pitiless business. Mike Birbiglia, a standup comedian and “This American Life” contributor turned filmmaker, writes, directs, and co-stars in the film as Miles, founder and de facto leader among equals of the six-person New York comedy troupe The Commune, which has been performing their brand of improvisational comedy for 11 years when word comes that their storefront theater space is closing. Miles is a veteran who has watched fellow members go on to the holy grail of improv (the barely fictionalized late night comedy show “Weekend Live”) and is still waiting for his shot as he approaches 40. But he’s no more the protagonist than Keegan-Michael Key’s ambitious Jack, who has a tendency to jump out of the ensemble and grab the spotlight in showboating bits, or Gillian Jacobs’s Samantha, who is fearless on stage but chokes when she and Jack are invited to audition for “Weekend.” It’s about all of them, along with the retiring Allison (Kate Micucci), the reflexively self-disparaging Bill (Chris Gethard), and the neurotic Lindsay (Tami Sagher), the “rich girl” whose parents support her comedy dreams while everyone else hustles day jobs and part-time gigs.

So yes, they resent Lindsay’s money, and they resent Jack’s success, and there’s a certain disdain for Miles’s habit of sleeping with the impressionable young women of his improv class, and so on. And yet when they get onstage, they put their baggage aside and “just say yes,” jump-starting skits inspired by audience comments and adding new ideas and characters on the spot, always building and always supporting. Birbiglia’s balancing act is impressive in how it embraces the complexities and contradictions of human behavior in the crucible of improvisational comedy, which is built on creativity and trust and generosity, and show business, strewn with ego and competitiveness and the need for attention and affirmation. With Jack off to TV and the theater closing, they have to evolve or move on, an anxious transition that brings out the less attractive emotions previously buried under the common cause of their improv credo.

The drama is honest without getting nasty and it’s genuinely funny but not at the expense of the characters. Well, not entirely anyway. Birbiglia likes these characters and the cast embraces their foibles. Probably because they too can relate. And for anyone not acquainted with an insider’s appreciation of the art of improv, Don’t Think Twice offers a crash course that makes the setting both very specific and surprisingly universal; you don’t have to be a theater major to relate to the group dynamics and conflicts of this longtime group.

Blu-ray and DVD editions include three featurettes and deleted scenes. The Blu-ray also features bonus DVD and Ultraviolet HD copies of the film.