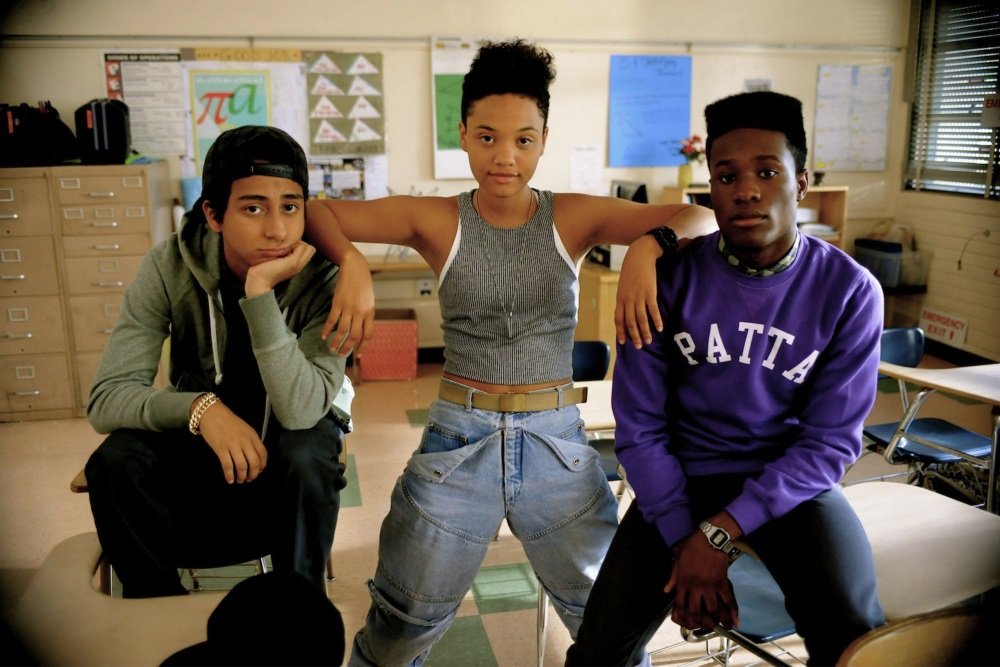 Dope (2015), a quirky tale of life in the Inglewood hood for three high school geeks with a passion of nineties hip-hip, is lively, snappy, and great fun, even with the threat of violence hanging over them throughout their strange adventure.

The friends are not the usual kinds of characters you find in an urban comedy: Malcolm (Shameik Moore), Jib (Tony Revolori), and Diggy (Kiersey Clemons) get good grades and play in a punk band. They’re bullied at their high school, where all students pass through a metal detector, and aspire to college. So how do they end up with a small fortune in MDMA (aka the party drug Molly) in a backpack, rival drug dealers on their trail, and a business plan to sell their stash via the darknet?

It’s complicated and writer / director Rick Famuyiwa (The Wood) has a fun time jumping the audience through the complications with rapid-fire cuts and a timeline that rewinds to put the situation in perspective. He also enjoys playing against stereotypes, though only so far. There are also gangbangers and drug dealers, a stoner hacker, a dead-eyed businessman who runs the drug trade from behind a front of legitimacy, and women who don’t rise beyond the level of sex object.

Our heroes are oddballs in a culture right out of Boyz n the Hood, but with sarcastic banter and comic escapes and a sense of entrepreneurship that only a nerd would think of. They’re straight outta Inglewood.

It won an award for editing at Sundance and the African-American Film Critics Association gave Famuyiwa an award for best screenplay.

On Blu-ray and DVD with two featurettes. The Blu-ray also features bonus DVD and UltraViolet Digital HD copies of the film.