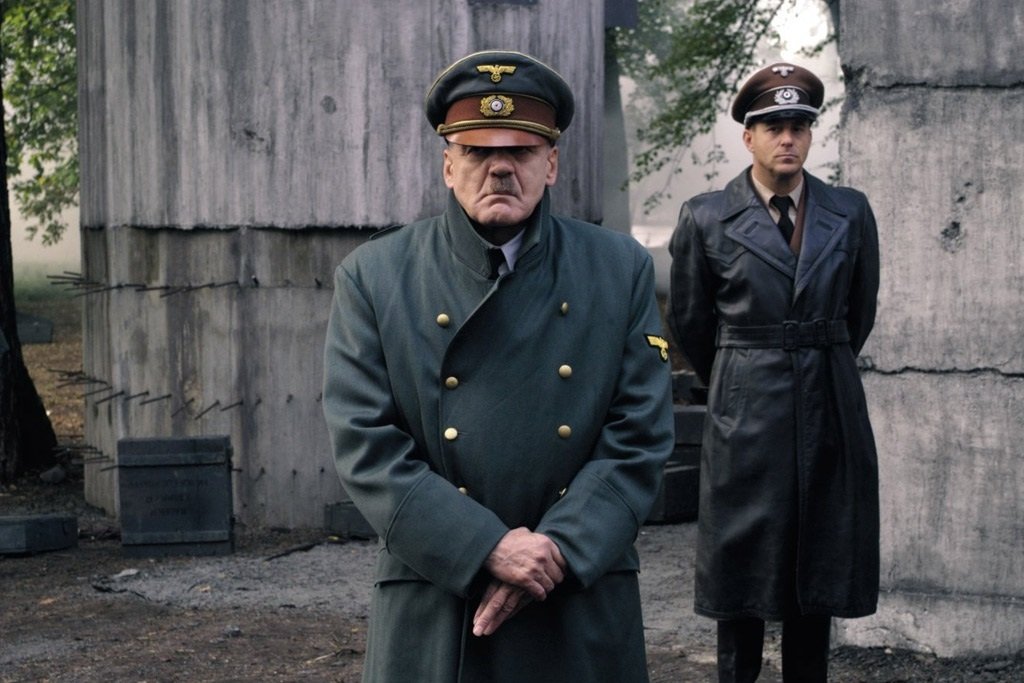 Downfall (2004), Oliver Hirschbiegel’s ambitious and complex dramatization of the final days of Adolf Hitler and the collapse of Germany, is a compelling history lesson and a riveting drama.

Bruno Ganz plays Hitler with creepy charm and paternal affection amidst his ping-ponging emotional instability. His megalomania and paranoia take over in an adrenaline rush and he barks and spits and fulminates at the treachery of the treasonous officers who “sabotaged” his grand plans. His quiet moments of thoughtful oblivion that are even scarier, dispassionately explicating his planned scorched Earth sacrifice of Germany to ensure his place in the history books. Juliane Köhler is Eva Braun, a deluded idiot child in a grown woman’s body who continues to play as the city falls to the Allied invasion, and Alexandra Maria Lara is Hitler’s blindly adoring secretary Traudl Junge.

While Hirschbiegel’s primary interest is on the beehive of power and personality down in the bunker, the sprawling, two-and-a-half-hour story deftly charts the sprawling collection of historical figures around it and the collapse and chaos above. We see the German lines pounded by the Russians, the ragtag kids fighting for the glory of the Reich in street skirmishes, and the SS’s reign of terror in one last, spiteful act of sadism and spite.

Most importantly, Hirschbiegel frames his compelling history lesson with the words of the real life Traudl Junge (from the interviews she gave before passing away in 2002) as she acknowledges her passive complicity and personal responsibility as a German. It’s a bracing reminder that before Hitler took power, it was handed to him. The lesson resonates long after the credits roll.

Downfall was an Oscar nominee for Best Foreign Language Film but unfortunately the film became more recognizable as an Internet meme. The dramatic sequence where Hitler is informed that Germany is doomed to fall was repurposed in dozens of comic shorts that simply swapped out the subtitles. Don’t let the original get lost to parody. See it in context of the provocative film.

Stream free on Kanopy or on Hoopla, which are available through most public and college library systems.

The DVD includes a documentary featurette and bonus cast and crew interviews.