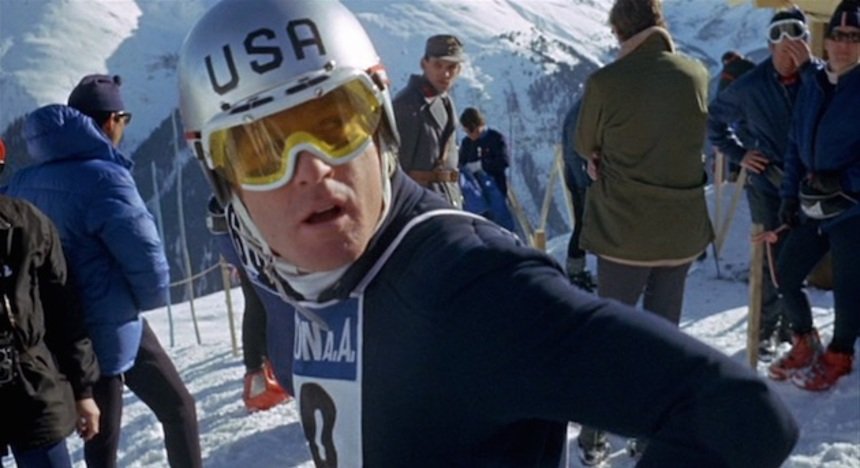 Downhill Racer (1969) is the feature debut of Michael Ritchie, the first project that frustrated actor and future movie star Robert Redford developed for himself, and the first of Redford’s proposed trilogy about the meaning of “winning” in American culture. That’s what gives such a riveting perspective to what would otherwise be called a “sports movie”: Redford’s David Chappellet, the brash, self-involved hotshot on the American ski team, is less concerned with the beauty of the sport than the attention of victory and fame.

Directed from a script by novelist James Salter and shot on location on the European ski circuit (where the director and star incorporated ideas and opportunities into the film as they arose), Downhill Racer makes no bones about Chappellet’s fierce ambition or dismissive arrogance, but the downhill runs are shot and edited with a visceral quality that takes us off the sidelines and into the skier’s perspective. The screen goes silent but for the cut of skis slicing a track through the snow and whoosh of the crisp mountain air whipping by and the camera captures the run in long takes and full shots to study the integrity of the athlete’s movement and at times watches the rush through the skier’s eyes, to give is the rush, the focus and the intensity of the experience.

The rest of the film reminds us of the industry behind the sport—raising money for the national team, traveling from one contest to another, negotiating for top draws (the earlier the pick, the fresher the snow pack) and managing the media—and the culture of fame. Redford’s matinee looks are more than just Hollywood casting in this context; the film never says it in so many words, but it’s clear that Chappellet’s popularity is as much for his good looks as for his success. The crowds love a handsome champion.

Gene Hackman is the practical coach who doesn’t like Chappellet or his attitude but knows that his ambition is the team’s best chance for a win and sixties screen beauty Camilla Sparv is Chappellet’s counterpart, a ski company rep who treats romance with the same emotional disconnection that Chappellet treats everything else.

, iTunes, GooglePlay and/or other services. Availability may vary by service.
Downhill Racer (The Criterion Collection) [Blu-ray]

Criterion’s Blu-ray and DVD releases feature two interview featurettes, each running about half an hour. “Redford and Salter” features new video interviews with Redford, who lays out the history of the film and his career and his determination to get it made in the face of studio resistance, and writer James Salter, who discusses the evolution of the script and how it changed during the filmmaking. “Coblenz, Harris, and Jalbert” features film editor Richard Harris, production manager Walter Coblenz, and former downhill skier Joe Jay Jalbert, who served as technical adviser and ski double. There are audio-only excerpts from a 1977 American Film Institute seminar with director Michael Ritchie, the archival promotional short “How Fast?,” and a booklet with an essay by critic Todd McCarthy.