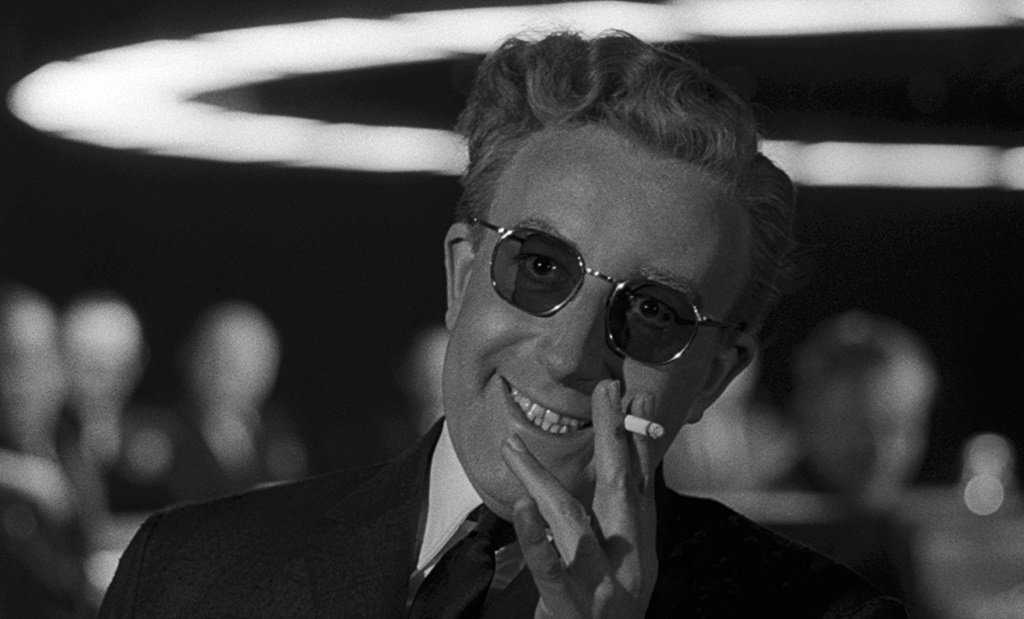 Dr. Strangelove or: How I Learned to Stop Worrying and Love the Bomb (1964), Stanley Kubrick’s screwball satire of cold war posturing and mutually assured destruction, is the funniest film ever made about nuclear holocaust. But it didn’t begin as a comedy.

The source novel, Peter George’s Red Alert, was a grave contemplation of the cold war gone hot with a rogue nuclear attack on Russia. Such possibilities seemed all too plausible in the 1960s in the wake of the Cuban missile crisis.

The story remains the same: A paranoid headcase of a General launches a first strike with misguided patriotic zeal and a milquetoast American president tries to work out a solution with an inebriated Russian premiere while his warmongering staff tries to turn disaster into opportunity with a modest proposal: just finish the job. Kubrick simply transformed a serious military thriller into a surreal farce of ideological hysteria and military arrogance. “Mr. President, I’m not saying we wouldn’t get our hair mussed, but I do say no more than ten to twenty million killed, tops. Depending on the breaks.”

Directing in a coolly precise style that director Barry Sonnenfeld once described as “absurdist realism,” Kubrick lets the absurdity slowly seep into the film. George C. Scott’s growling understatements as General Buck Turgidson (“I don’t think it’s quite fair to condemn a whole program because of a single slip-up, sir”) and Sterling Hayden’s deadpan intensity as General Jack D. Ripper (whose rants about fluoridation as a commie conspiracy to “sap and impurify our precious bodily fluids” are rooted in impotence) erupt into the slapstick scuffles of international diplomacy. “Gentlemen, you can’t fight in here!” admonishes President Mervyn Muffley (Peter Sellers in milquetoast mode). “This is the War Room!”

The conflagration of war and sex is there from the opening credits, where bombers refuel in scenes of mechanical copulation. In Dr. Strangelove, it seems all too plausible that it’s not politics but arrogance, machismo and an extreme act of sexual overcompensation that brings about the end of the world as we know it.

Keenan Wynn co-stars and Slim Pickens and James Earl Jones are part of the bomber crew on the final run to Armageddon.

It was added to the National Film Registry in 1989.

Leaves HBO Max at the end December. Add to My List

The Blu-ray and DVD special editions from Sony include the 47-minute “Inside Dr. Strangelove: How I Learned to Stop Worrying and Love the Bomb” from 2000, 31-minute documentary “No Fighting in the War Room: Dr. Strangelove and the Nuclear Threat” from 2004, and 2004 interview featurette “Insights on the Nuclear Threat by a Political Expert” with Robert McNamara, Secretary of Defense under President Johnson at the time of the film’s release (31 mins). Other featurettes include “Best Sellers Or: Peter Sellers is Dr. Strangelove” (19 mins) and Stanley Kubrick retrospective “The Art of Stanley Kubrick: From Short Films to Strangelove” (14 mins) archival split-screen interviews with Peter Sellers and George C. Scott from 1963, galleries of original ad art and posters, filmographies, and bonus trailers. The 45th Anniversary Blu-ray features an exclusive video track of picture-in-picture interviews and trivia on the cold war and nuclear arms race and comes in hardback booklet with essays and photos.

Criterion released their own special edition on Blu-ray and DVD in 2016 from a new 4K digital transfer with all of the featurettes carried over from the Sony release plus new interviews with Stanley Kubrick scholars Mick Broderick (20 mins) and Rodney Hill (18 mins), archivist Richard Daniels (15 mins), cinematographer and camera innovator Joe Dunton and camera operator Kelvin Pike (13 mins), and David George, son of author Peter George (11 mins). Archival supplements exclusive to this edition are excerpts from a 1966 audio interview with Kubrick conducted by Jeremy Bernstein (4 mins) and an excerpt from a 1980 interview with Sellers from NBC s Today (5 mins), plus a booklet with an essay by scholar David Bromwich and a 1962 article by screenwriter Terry Southern on the making of the film.