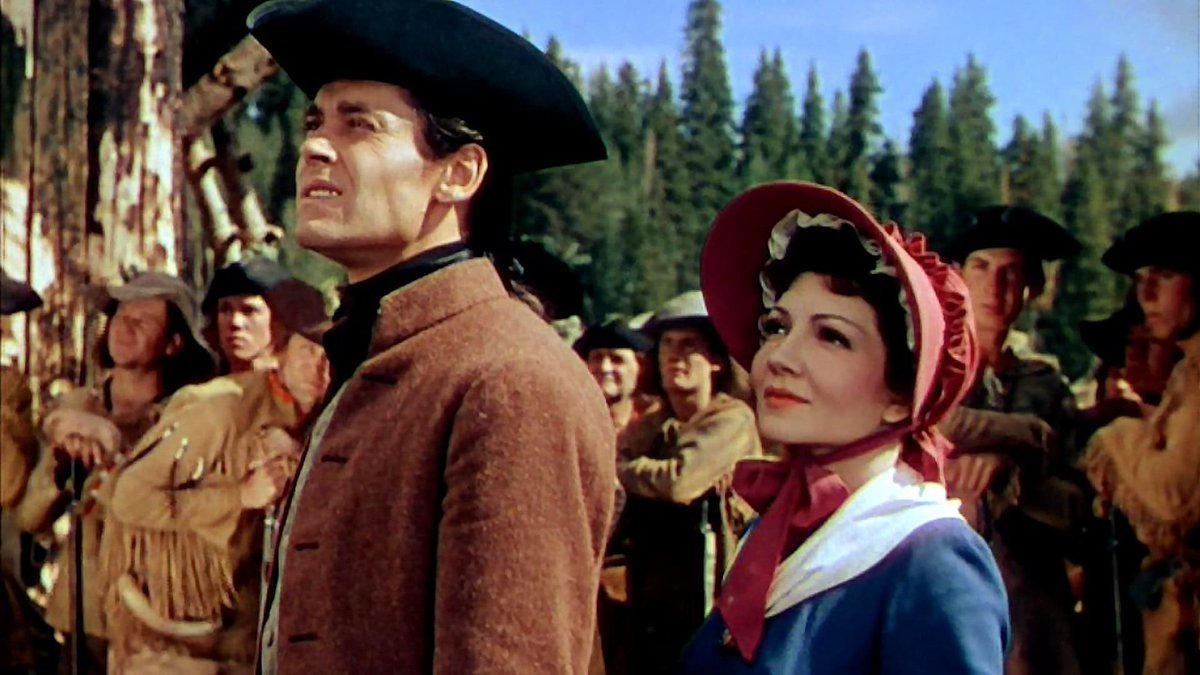 John Ford made his Technicolor debut with Drums Along the Mohawk (1939), a stunning pre-western about young settlers in the rich forest lands of the Mohawk Valley during the Colonial era.

Claudette Colbert takes top billing as the cultured wife and Henry Fonda is her salt-of-the-Earth husband who takes her out of the city and into the wilds. When he leaves to fight the war of independence, she remains behind to hold down the homestead.

The Revolutionary War on the frontier becomes a portrait of John Ford’s America as embodied by the individualists who pull together and forge a community under fire. It’s also about the evolution of Colbert’s frontier wife from tenderfoot terrified by the mysteries of this isolated existence to hardened woman who works side by side with her husband, looks after other families in the community, and even picks up a gun to defend her home. Drums came out the same year as Stagecoach and Young Mr. Lincoln and is too often overshadowed by those masterpieces. The restoration from The Film Foundation might help bring its reputation back up.

Ford proved himself to be a master of the art of Technicolor filmmaking from the beginning. Drums is like an early American landscape painting come to life and Ford uses the painterly hues to create both an idealized picture of early American Eden and a dramatic backdrop for a human story in an awesome (and dangerous) land of promise.

It is a gorgeous film and this is a stunning restoration that glows with the rich hues of early three-color Technicolor. You may detect some minor color registration issues in a couple of shots (mostly, it seems, near dissolves and transitions) but overall it looks astounding, which is all the more remarkable given that the original elements are either lost or destroyed.

Now Playing in 30 Years of The Film Foundation

The Blu-ray from Twilight Time is currently out of print but can be found used and in collector’s markets. It presents the restoration by The Film Foundation and features 2007 documentary “Becoming John Ford,” directed by Twilight Time partner Nick Redman, which parallels the development of the director with his often contentious relationship with Darryl F. Zanuck (who became the head of 20th Century Fox) and is most interesting when it tackles their clashes (through letter and memos read in voice-over by Walter Hill and Ron Shelton). Also features commentary by film historians Redman and Julie Kirgo, Twilight Time’s trademark isolated musical score and an eight-page booklet with an essay by Kirgo. Limited to 3000 copies, available exclusively from Screen Archives and TCM.