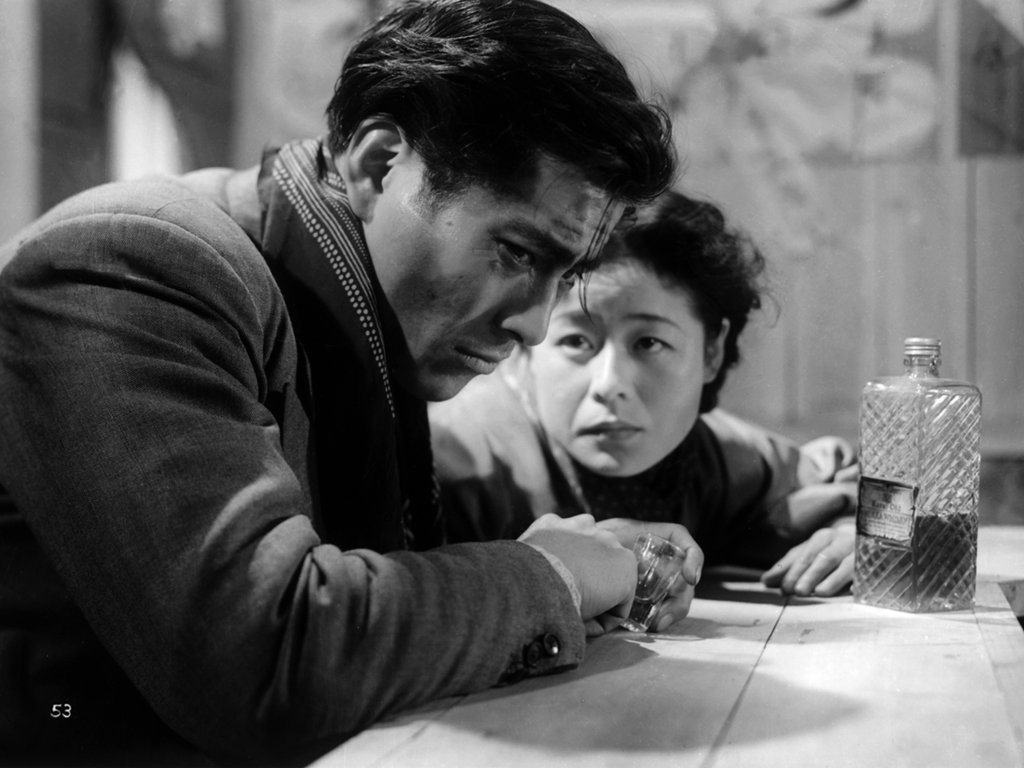 Like filmmakers all over the world, Akira Kurosawa’s films took a darker turn after the end of World War II, when the national demands of rousing propaganda films were no longer an industry imperative and filmmaker and audiences faced the challenges of life after war. Here are two of his most interesting and most compelling films of the immediate post-war years, a pair of crime dramas that I like to think of as Kurosawa Noir.

Drunken Angel (1948) stars Takashi Shimura as an alcoholic doctor in the slums of post-war Tokyo and Toshiro Mifune as the “cheap hoodlum” diagnosed with tuberculosis, a cocky young blade who resists treatment but winds up with a grudging respect for the hard-drinking doctor. This was the first major role for Mifune, the first collaboration between the actor and Kurosawa, and the launch of a career that made Mifune an international star and a Japanese superstar. In the less showy role is Shimura, who played the elder mentor to young apprentice Mifune in a handful of subsequent Kurosawa films (notably The Seven Samurai) and starred in Kurosawa’s personal Ikiru.

The setting, the bombed-out remnants of a city turned urban bog of stagnant mudholes the size of swamps surrounded, is as vivid as can be, and Kurosawa’s contrast of reckless, arrogant gangsters swaggering through dire poverty is striking without being obvious in its deglamorization of the romantic code of the yakuza brotherhood.

Stray Dog (1949) reunited the two stars with Kurosawa for a police story, with Mifune as a rookie homicide cop whose sloppiness leads to losing his handgun to a pickpocket and Takashi as the veteran officer assigned to mentor Mifune and help him track down the weapon before it kills someone. It’s more than a matter of personal embarrassment; guns and bullets were worth their weight in gold in post-war Japan and when the gun is used in a series of crimes, it borders on tragedy.

The young Mifune is a marvelous dichotomy, his restless energy checked by a veneer of surface calm: the composed social face and fierce turmoil underneath. Shimura is a complete contrast as his older, wiser mentor: warm and patient, he calms down the anxious, emotionally impulsive rookie cop and channels his efforts to methodically follow the leads.

The engaging thriller is also a fascinating film noir snapshot of post-war urban Tokyo, where the collapse of the economy has spawned rampant poverty and crime and the slums are crowded with the desperate and disenfranchised. In one amazing sequence, Mifune dresses down to wander the streets and alleys undercover and finds an entire underclass of hustlers, homeless, and crooks.

Kurosawa sets it in the sweltering heat wave of a Tokyo summer and the atmosphere pervades the entire film and exacerbates Mifune’s anxiety and impulsiveness. He’s driven by a mixture of shame and duty, afraid he’ll be fired and feeling responsible for every crime committed with the gun, but it’s also part of his identity as a detective. Kurosawa matches the atmosphere to the rising tension and the heat wave breaks in dramatic fashion at the climax. It was so effective that Kurosawa reused the idea in The Seven Samurai.

Also on disc and on SVOD through Amazon Video (Drunken Angel

) and other services. Availability may vary by service.
Drunken Angel (The Criterion Collection) [DVD]