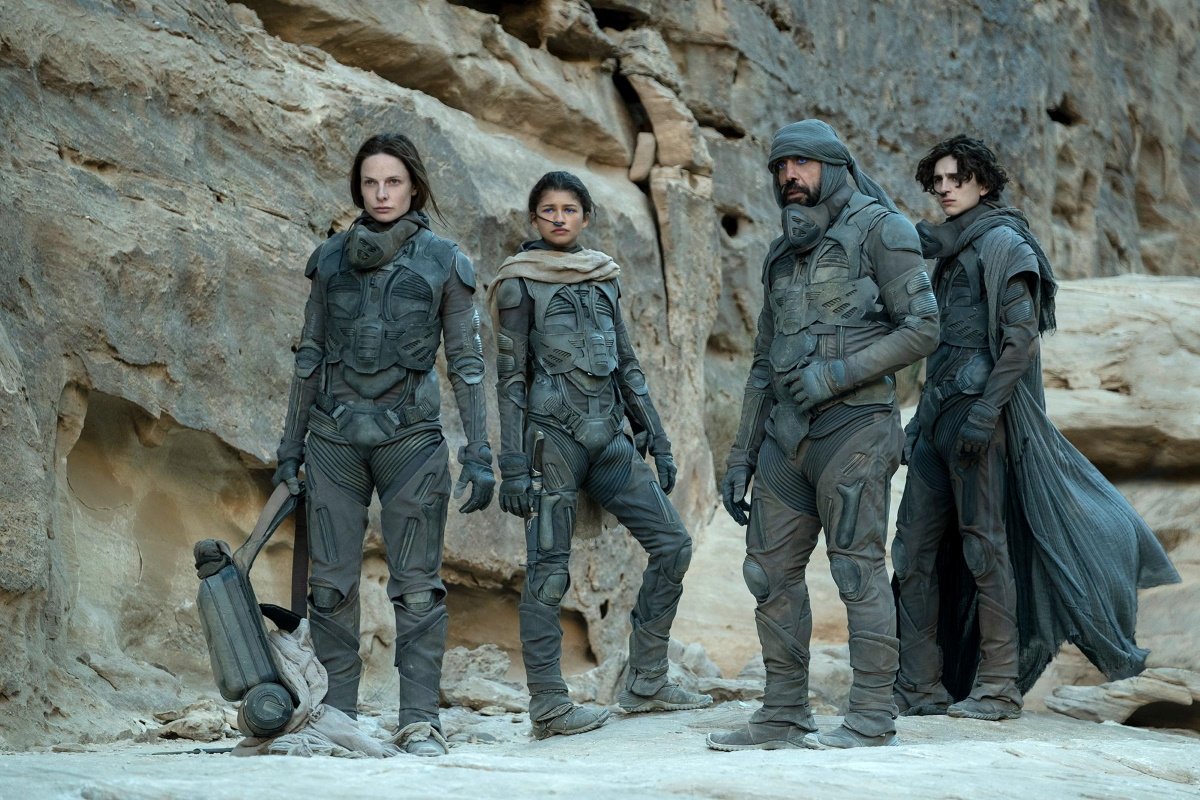 Denis Villeneuve directs “Dune“ (2021, PG-13), an epic science fiction story of royal intrigue, betrayal, rebellion, and giant sand worms on a desert planet that provides the rare spice that enables interstellar travel. Timothée Chalamet stars as a prince who flees a conspiracy targeting his family and joins the indigenous people of the planet. The star-studded cast includes Rebecca Ferguson, Oscar Isaac, Josh Brolin, Jason Momoa, Javier Bardem, and Zendaya. It’s the third screen adaptation of the dense and complex landmark novel by Frank Herbert but covers only the first half of the book; the story concludes in the announced “Part II.” Available to stream same day as theaters, available for 31 days only. See it on the big screen if you can but if you are still (understandably) wary of going to movie theaters, turn out the lights and really engage with this imaginative odyssey. (HBO Max)

“Found“ (2021, PG) follows three Chinese-born girls adopted by different American families who discover they are cousins thanks to DNA tests and travel to China to connection with their ancestry. The documentary explores issues of identity, family, and the long-term effects of China’s one-child policy. (Netflix)

A teen runaway (Stefanie Scott) finds a mysterious door in the woods that leads to an alternate dimension filled with monsters in “The Girl in the Woods: Season 1“ (TV-MA), a supernatural young adult drama set in the Pacific Northwest. Misha Osherovich and Sofia Bryant costar her best friends and partners in battling monsters. Krysten Ritter directs the first four episodes, written by an all-woman writing team. All eight episodes available. (Peacock)

A wounded park ranger (Monique Rockman) is taken in by a mysterious father and son living off the grid in “Gaia“ (2021, R), an eco-horror thriller set in dense Tsitsikamma Forest of South Africa. (Hulu)

In the teen vampire thriller “Night Teeth“ (2021, TV-14), a college student and part-time chauffeur (Jorge Lendeborg Jr.) is hired by a pair of seductive but hungry vampires (Debby Ryan and Lucy Fry). (Netflix)

Patrick Wilson and Vera Farmiga return as the paranormal investigators Ed and Lorraine Warren in “The Conjuring: The Devil Made Me Do It“ (2021, R), the third film in the successful horror movie franchise (not counting spinoffs). (HBO Max)

M. Night Shyamalan’s “Old“ (2021, PG-13) is a thriller about people trapped on a remote beach where they age at an alarming rate.

Maggie Q stars as a contract killer raised by a master assassin (Samuel L. Jackson) in the action thriller “The Protégé“ (2021, R) costarring Michael Keaton. Also on DVD and at Redbox. Also new:

Available a week after select theaters nationwide is “Bergman Island“ (2021, R) starring Vicky Krieps and Tim Roth as a filmmaking couple on a retreat at Faro Island, where Ingmar Bergman drew inspiration.

“Inside Job: Season 1“ (TV-MA), an animated comedy for adults, features the voices of Lizzy Caplan and Christian Slater as members of a team keeping conspiracies a secret.

Streaming TV: the second season of “Locke & Key: Season 2“ (TV-14), based on the graphic novel by Joe Hill and Gabriel Rodriguez, continues the story of the Locke family and the magic keys handed down to their children. Also new:

International passport: French comedian and actor Dany Boon directs and stars in “Stuck Together“ (2021, France, TV-MA, with subtitles), a comedy set during the pandemic lockdown in Paris. Also new:

True stories: the limited series documentary “The Raincoat Killer: Chasing a Predator in Korea“ (Singapore, TV-MA, with subtitles) recounts the hunt for a serial killer in Seoul in the 2000s.

Toni Collette plays a pub owner who rallies her small Welsh community to raise a thoroughbred to race in “Dream Horse“ (2020, PG), a low-key drama based on a true story.

Chef David Chang hosts the foodie docuseries “The Next Thing You Eat: Season 1“ (TV-PG) about the future of food production.

Episodes of the new ABC drama “Queens“ (TV-14) and the reality show “The Bachelorette“ (TV-14) stream a day after their respective network debuts.

A psychiatric nurse (Rudi Dharmalingam) in an Australian hospital starts to question the line between reality and madness in “Wakefield: Season 1“ (TV-MA).

Martin Clunes stars in the four-part miniseries “Manhunt: The Night Stalker” (TV-MA), based on the true story of the police pursuit of a notorious d serial rapist. New episodes each Monday. (Acorn TV / AMC+)

The two-part documentary “The Men Who Sold the World Cup“ (2021) tells the story of how one of the biggest sporting events in the world was sold to the highest bidders.