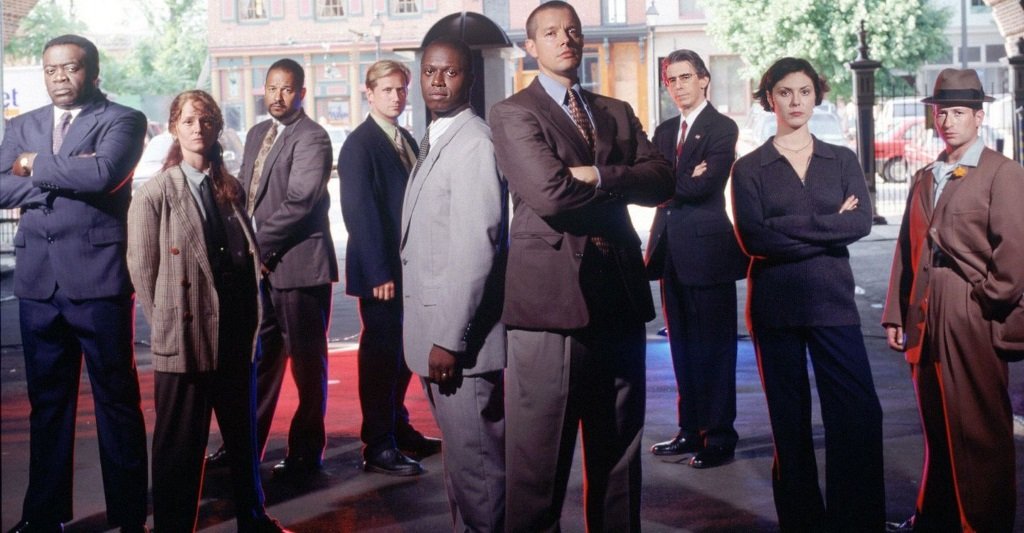 Homicide: Life on the Street: The Complete Series (Shout! Factory)

Homicide: Life on the Street (1993-1999) earned its reputation as the best show on TV during its run in the 1990s from the very beginning. In the pilot episode, “Gone For Goode,” rookie detective Tim Bayliss (Kyle Secor) walks into the squad room of Baltimore’s elite, into the tetchy company of the squad’s brilliant loner detective Frank Pembleton (Andre Braugher), and smack into his first case. The murder of 11-year-old Adena Watson will haunt Bayliss through the entire series. Series executive producer Barry Levinson helms the opening episode and establishes the nervous, energetic camerawork, the bickering camaraderie of the homicide squad, and the meticulous attention to police detail that defined the series, which was based on the nonfiction book by David Simon.

Levinson won an Emmy for his efforts and launched a show that almost never made it out of infancy. The first season was a mere nine episodes, the second only four, but what episodes! The Watson case comes to a brilliant peak in “Three Men and Adena,” an episode set almost entirely in “the box” where Pembleton and Bayliss attempt to sweat, bully, shame, and crack the prime suspect (played with a blunt, defiant obstinacy by Moses Gunn). Braugher is brilliant as Pembleton—cocksure, cool, elegant, precise, and defiantly private—and there is a tendency to focus on him at the expense of an amazing ensemble, which includes (listed by respective pairings in the debut season) Daniel Baldwin and Melissa Leo, Clark Johnson and Jon Polito, Ned Beatty and Richard Belzer (who has made a veritable career playing the sardonic Det. Munch), and Yaphet Kotto as Lt. Giardello. Yet fans waited just for those moments when Braugher would step into the box and work an interrogation with a control unlike anything you’ve seen on a cop show, especially when he twists it for a chilling confession in “Black and Blue” and tosses it in Giardello’s face. The series also set the bar in its choice of directors; the first couple of seasons feature episodes directed by Martin Campbell (Casino Royale), Michael Lehmann (Heathers), and indie filmmakers turned top TV directors Nick Gomez and Alan Taylor (both of whom became reliable series directors; Taylor went on to become a regular for The Sopranos, Mad Men, and Game of Thrones).

The third season—the first to get a full season order—starts up hard and fast with a “red ball,” a high profile murder of a nun that becomes the first in a run of serial killings, and when the arrogant lead detective stumbles the case is handed to Pembleton, the star player on the squad. Steve Buscemi guest stars as a racist suspect in a police shooting (one of the only times Pembleton blows an interrogation) who winds up dead and Sean Nelson is a cold juvenile killer who couldn’t care less that he murdered an innocent boy in “Every Mother’s Son,” while the mothers of victim and killer unknowingly meet in the station waiting room. Polito had left the series in the break, his absence explained as an off-screen suicide, and this marked the final season for Baldwin and Beatty, who are “on suspension” at the start of Season Four and never return, while Reed Diamond joins as arson investigator Mike Kellerman. He instantly clashes with Pembleton but earns a spot on the squad when he snags the prime suspect with an impressive bit of interrogation in the two-part season opener “Fire” and is paired with longtime lone gun Lewis. This season also features two of the show’s finest episodes: “A Doll’s Eyes,” with Marcia Gay Harden and Gary Basaraba as the grieving parents of a child killed by a stray bullet, and the intense “Thrill of the Kill,” where the squad goes after a “thrill killer” working his up I-95, while Bruce Campbell takes a rare dramatic role as a cop who takes matters into his own hands in the two-part “Sniper”/”Justice.” Also joining the cast in a recurring role this season is Max Perlich as a freelance news cameraman, and the director roster over these two seasons include Tim Hunter, Ted Demme, Keith Gordon, John McNaughton, Richard Pearce, Darnell Martin, Kathy Bates, and the first episode directed by co-star Clark Johnson.

Season Four ends with Pembleton suffering a stroke and the fifth season charts his return, more insufferable than ever as he’s limited to desk duty while dealing with the pressure of job, family, and healing. Even Bayliss, who relishes the squad car debates with the cocksure Pembleton, has had enough and resolves to find a new partner. Otherwise it’s business as usual: a hostage situation at a school (“Hostage”), an investigation of a prison riot that left two dead (“Riot,” which features returning faces from previous episodes), and a dramatic climax in the rise of charismatic drug lord Luther Mahoney (Erik Todd Dellums), one of the best stories in the entire series. It’s the last season of Melissa Leo as Sgt. Kay Howard, Toni Lewis makes her first appearance as Det. Terri Stivers, and Michelle Forbes joins as the new Medical Examiner. Their just the beginning of the new faces in the squad. Season Six adds three new detectives on the squad: Falsone (Jon Seda), Ballard (Callie Thorne) and Gharty (Peter Gerety). And then the first redball hits: a dead body found in a hotel room washroom during a big charity event (where the suspects include guest stars James Earl Jones, Lynne Thigpen, and Jeffrey Wright), and Lewis and Falsone are shot at by a sniper, all in a season-opening three-episode arc. Stivers soon joins the shift and becomes central to the reverberations of the Luther Mahoney killing that hangs over the season as his sister Georgia Rae (Hazelle Goodman) executes her mission of vengeance, which comes to an explosive finale in the two-part “Fallen Heroes” directed by Kathryn Bigelow. Other directors this season include Whit Stillman, Kevin Hooks, Mark Pellington, Alison Maclean, Mary Harron, Uli Edel, Barbara Kopple, Steve Buscemi, and Gary Fleder, who directs the Emmy nominated episode “Subway,” co-starring Vincent D’Onofrio as the doomed victim of a subway platform push. Andre Braugher won an Emmy for Best Actor this season, the actor’s final season on the show.

The seventh and final season brings even more new characters into the Baltimore Homicide squad room: Michael Michele as Det. Rene Sheppard, who signs on as Lewis’ new partner, and Giancarlo Esposito as FBI Agent Michael Giardello, the estranged son of Lt. Giardello, who returns to Baltimore for a funeral in the season opener and stays through the season. That episode also marks the returns of Bayliss, now partnered with Munch since Pembleton left the force (and the series). The series has always had rotation shifts, but the absence of Braugher is glaring and the new crew lacks the grit and experience of previous detectives. Still, there are some stand-out stories: the two-part “Wanted Dead or Alive” with guest star Christopher Meloni as a bounty hunter who shoots the wrong man; “Kellerman, P.I.,” which see the return of the disgraced cop in a case involving a murdered newborn; and “Shades of Gray,” where Sheppard is beaten by a brutal suspect who steals her gun and leaves her more than a little shaken. The reverberations echo through subsequent episodes. Indie filmmakers Lisa Cholodenko and Miguel Arteta and noted documentary directors Barbara Kopple and Joe Berlinger are among the directors this season.

Note that the episodes of the final few seasons were rearranged by NBC when they first aired but the disc set restores the correct chronology intended by the producers, which restores the show’s emotional and narrative arc.

But that wasn’t the end of the series. Not quite. Homicide: The Movie (2000) brought a powerful coda to show as the squad room becomes unusually crowded when the entire cast, past and present, converges to hunt for the gunman who shot beloved former shift commander Lt. Al Giordello, now a controversial Baltimore mayoral candidate. The class reunion could have easily turned into a gimmicky series of cameos, and with such a sprawling cast many familiar faces are indeed little more than walk-ons, but the intelligent script anchors the investigation in the even more anticipated reunion of the tetchy, intense retired detective Pembleton and his former partner Bayliss. Never quite friends yet intimately trusted partners, the relationship of the most compelling duo in the show’s history is pushed to the brink as the morally sure Pembleton digs around the guilt that haunts Bayliss in a devastating climax. All the hallmarks of the show are here—the vivid location shooting, the nervous you-are-there camerawork, the effective use of popular music—and the episode comes full circle in a lovely coda where even the deceased make their appearances. It’s an uncompromising piece of American television and a moving end to a great series.

The series was released on DVD well over a decade ago by A&E (which once had a thriving home video business) and is long out of print. Shout! Factory brings them all back, along with all three Law & Order crossover episodes (on a bonus disc along with Homicide: The Movie), commentary on six episodes through the run of the show (including the pilot, the series finale, and “The Subway” from Season Six), the featurettes “Homicide: Life at the Start,” “Homicide: Life in Season 3,” “Homicide: Life in Season 4,” “Inside Homicide: An Interview with David Simon and James Yoshimura” (from Season 5), a live panel discussion with Barry Levinson, Tom Fontana, Julie Martin, and James Yoshimura, and the made-for-PBS documentary “Anatomy of a Homicide” (1998), a detailed look at the creation of the episode “Subway,” from idea through script and production to broadcast. You get it all: script conferences, location scouting, special effects challenges (how do portray a man convincingly trapped by a tram and twisted like taffy?), the clip from the HBO series “Taxicab Confessions” that inspired the story, and a privileged look at network politics.

On DVD from Shout! Factory
Homicide: Life On The Street: The Complete Series [DVD]