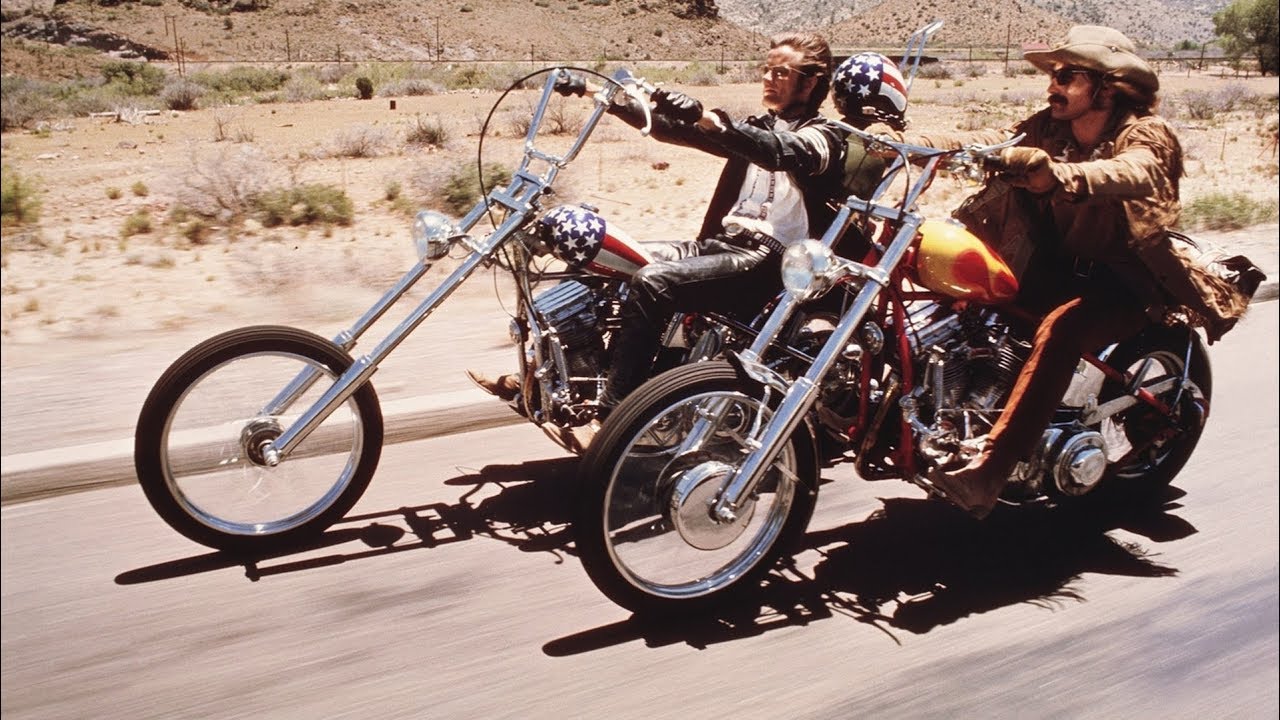 Peter Fonda was already a counterculture icon when he suited up in black leather and a star-spangled helmet, mounted a Harley-Davidson chopper, tossed his watch to the desert floor, and drove off with a shaggy Dennis Hopper in search of America.

The film was Easy Rider (1969), an independent film produced by Fonda, directed by Hopper, largely scripted by cult author Terry Southern, and shot on the road. The low-budget production became a counterculture blast across the bow of an out-of-touch Hollywood system. From the opening blast of the biker anthem “Born to be Wild” to the grim disillusion of the climax, it tapped into the pulse of American youth, became a runaway hit and, for better or worse, the defining film of a generation.

Fonda’s Wyatt and Hopper’s Billy set off from Mexico to Mardis Gras on their way to find their paradise in Key West. Along the way they pick up hitchhikers, meet salt-of-the-earth folks and idealistic hippies in a dusty desert commune, clash with bigots and intolerant rednecks, and lose their way on a bad acid trip in New Orleans.

Cinematographer Laszlo Kovaks captures it with a glorious sense of spontaneity and gives the traveling scenes a liberating sense of flight across the two-lane blacktops that wind from the western desert to the lush backwoods of the Deep South. The defining soundtrack of The Band, The Birds, Hendrix and others energizes the journey.

But Easy Rider is an uneasy portrait of the late sixties right from the opening, where the two bikers launch their idealistic odyssey with a cocaine deal. Billy is skittish, reflexively suspicious of strangers, and impatient to get going. Wyatt, the thoughtful, introspective one, is open to the warmth and the generosity they find along the way but unable to really connect. “I’m hip about time, but I just gotta go,” is his answer to invitation to settle down. The freedom of the road was also an escape.

The little road movie of hippy bikers was an odyssey for the era of sex, drugs and rock ‘n’ roll, of Vietnam and protest marches, of idealism and cynicism stirred by the volatile culture clash of the late sixties. Easy Rider is both a celebration and epitaph. Decades later, this cinematic time capsule still works on both counts.

It won an award for best first work at the 1969 Cannes Film Festival and was nominated for two Academy Awards, for Jack Nicholson’s supporting actor performance and for the original screenplay, and was added to the National Film Registry in 1998.

The film has been released in numerous editions on Blu-ray and DVD. The Sony 40th Anniversary Blu-ray features commentary by director/co-writer/actor Dennis Hopper and the 1999 retrospective documentary Easy Rider: Shaking the Cage. The Criterion edition features both of those supplements plus an archival commentary track from 1995 with Hopper, co-writer/actor Peter Fonda, and production manager Paul Lewis and the 1995 featurette Born to Be Wild, plus archival footage of Hopper and Fonda at the 1969 Cannes Film Festival, trailers, and an accompanying booklet.