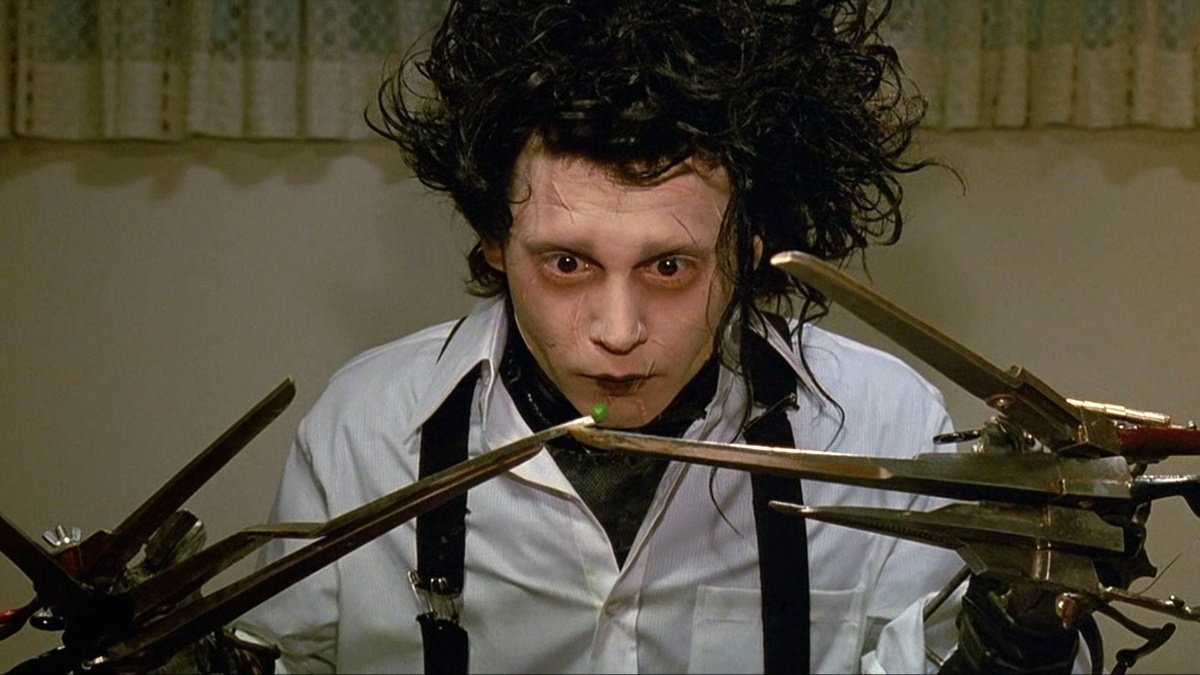 Johnny Depp is sweetly haunting as the ultimate innocent outcast dropped into the petty jealousies and fears of suburban America in Edward Scissorhands (1990).

He’s the innocent creation of a gentle, lonely inventor (Vincent Price) in a Gothic horror movie castle somehow sprouting in the midst of Middle America, left unfinished by his father’s untimely demise. With his gothic black leather garb, wild fright wig, and Swiss army knife attachments at the end of his arms, Depp turns a nightmarish exterior into little boy lost when he’s rescued from his gloomy horror movie castle and plopped into suburbia by a maternal Avon Lady (Dianne Wiest).

This dazed clockwork boy is a wide-eyed Frankenstein’s monster by way of Pinocchio and Depp plays him with a sense of wonder, curiosity, dazed joy, and lonely isolation. In Burton’s world of guileless dreamers and eccentric innocents, that makes him easy prey for the petty jealousies and social predators of suburban America. But for all the social satire and horror movie references (including a touching cameo by horror icon Price as the benevolent creator), this paean to misfit outcasts and misunderstood artists is ultimately a magical and melancholy fairy tale for the modern world.

It was the first of many collaborations for Burton and Depp and it firmly established Depp’s affection for offbeat projects and iconoclastic creators in the 1990s and early 2000s.

Winona Ryder plays the girl of his dreams, Anthony Michael Hall is the bully who torments him, and Kathy Baker and Alan Arkin costar as his adoptive parents in suburbia. The music is once again by Danny Elfman.

It earned an Oscar nomination for the inventive make-up and won a BAFTA for the delightful production design by Bo Welch.

The Blu-ray and DVD releases include two commentary tracks (one by director Tim Burton, the other by composer Danny Elfman interspersed with the isolated score), a documentary featurette, and conceptual artwork among its supplements.