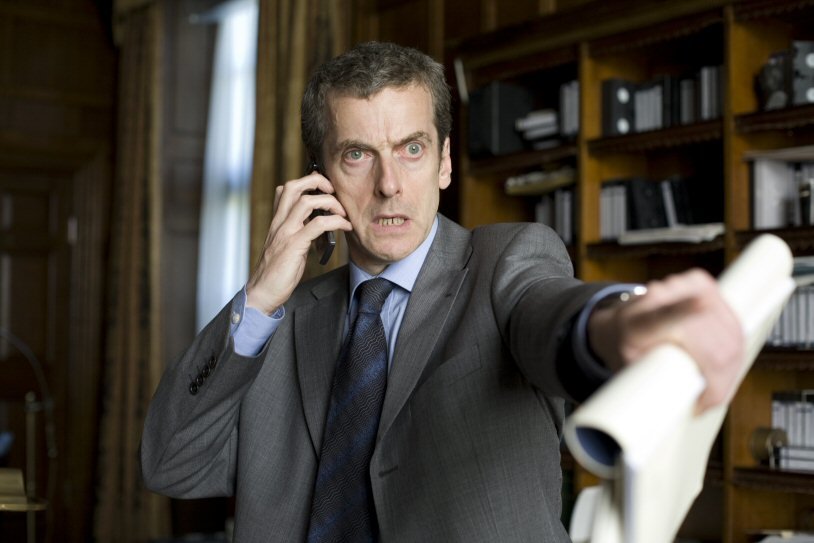 In the Loop (2009), a fiercely funny and profane satire of British party politics and international diplomacy, makes the case that politics is no place for idealists or amateurs. The triumph of director Armando Iannucci (Veep), his writers, and especially his star, Peter Capaldi (Doctor Who), is that for all the raucous chaos and foul dialogue, it’s a simultaneously hilariously and terrifyingly convincing model of how modern statesmanship must work.

Tom Hollander’s Simon Foster, the diplomatically naive Minister of International Development, looks to be the film’s ostensible hero, a political stumblebum who has a tendency to talk about issues he has no business discussing and an even worse habit of offering opinions in place of doubletalk. But it’s Capaldi’s Malcolm Tucker, the Prime Minister’s director of communications and the administration’s internal strong arm, who commands attention. Where some rule through terror, Malcolm has learned to control through verbal intimidation. His invective-laced tirades are as mesmerizing as they are funny, almost hypnotic in their reach for creatively foul threats and insults, and his tactics know no boundaries, especially as Simon’s public comments contradict the administration’s official public line and its secret march to war in lockstep with America. It just gets more tangled when he’s sent to Washington.

Without naming any actual countries or even dates, it turns into a commentary on the political machinations involved in justifying an invasion of Iraq by misrepresenting evidence, suppressing conflicting information, and quarantining dissenting voices. David Rasche is perfectly devious as the American architect of invasion of an unnamed country in the Middle East (think of him as equal parts Donald Rumsfeld and Dick Cheney, with a casually arrogant demeanor and a cutting line of attack) and he’s in no mood to see Simon’s confused statements add to his own troubles. What seems absurd in a political culture statecraft is merely high-stakes poker on an international scale and reason is merely an excuse to serve opportunity and power.

There’s not much shape to this film, which plays like a pair of connected episodes of TV series (no surprise, given the roots of the film in the British series The Thick of It) and is directed in the mock-doc style of The Office. But for all the satirical exaggeration and comic complications (one of them courtesy of Steve Coogan as a frustrated constituent whose private conflicts with Malcolm become a very public distraction), its portrait of politics as gamesmanship over governance is fiercely funny and terrifyingly convincing. Hollander makes Simon’s bumbling lack of media savvy and his timid tiptoe up to making a moral stand endearing while the film plays him as completely impotent in the face of guile, experience and the ruthless determination of Malcolm, a power player whose caustic wit is so cutting that it lacerates anyone without the thick skin of political experience. Mr. Smith came to Washington with an idealism strong enough to stand up to such cynical ploys. Mr. Tucker has no such armor and Iannucci no such faith in idealism without guile. Given the startling turn in modern American politics, it’s hard to blame him.

It is not rated but it features foul language that would melt the ears of the ratings board.

Also on disc
In the Loop [DVD]