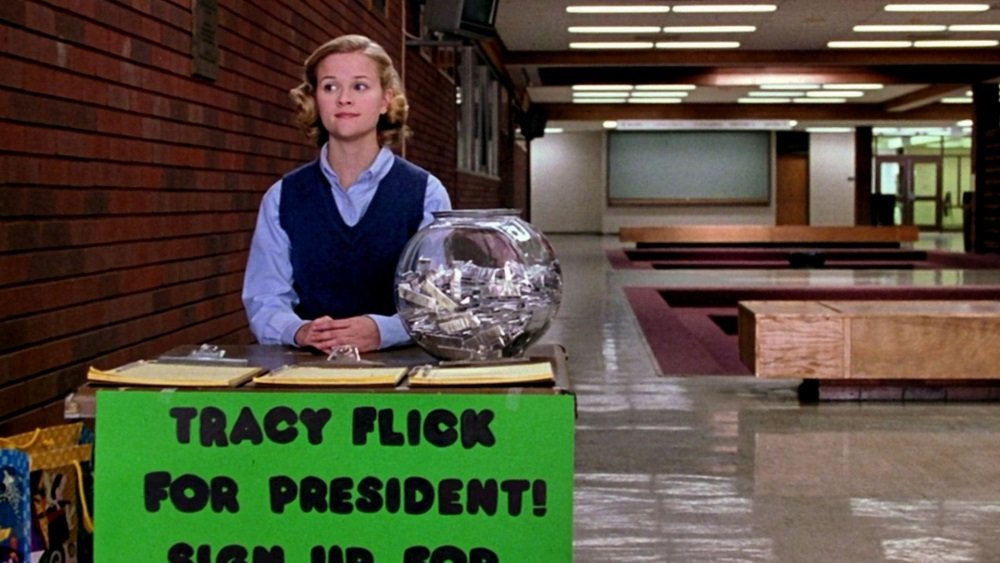 Election (1999), Alexander Payne’s wicked satire of power and (social) politics set in the overheated incubator of a high school student body election, is as sharp and perceptive now as it was in 1999.

Matthew Broderick is the passionately dedicated and somewhat condescending civics teacher Jim McAllister, whose extra-curricular involvement helps compensate for a passionless marriage. Reese Witherspoon is Tracy Flick, the chirpy, aggressively active over-achiever who sees winning as merely an act of will, and she’s the most willful student in school.

It sets itself up as a battle of wills between the not-so-benevolent teacher, who drafts a sweetly oblivious and genuinely generous jock (Chris Klein in his debut performance, still the best of his career) to give Tracy competition, and the ruthlessly ambitious super-student who sees student government office as her due. But Payne and co-writer Jim Taylor (adapting the novel by Tom Perrotta) are equal opportunity satirists and their sly wit dismantles everything from high school culture to suburban complacency.

There’s a savage wit to the bad behavior motivated by unchecked ambition, emotional need and simple human nature, and each of the characters is given room to justify their actions in self-serving monologues that reveal far more about the individual characters than the events they report. But even at their most extreme, these specimens of human frailty are awfully human and for all the satirical edges, Payne shows an affection for and understanding of all of his major characters. Which alone makes it more interesting and perceptive than the far more celebrated American Beauty.

It earned Payne and Taylor an Academy Award nomination (for Best Adapted Screenplay) and won three Independent Spirit Awards (including Best Feature and Best Director). But don’t be fooled into thinking that because this comedy is set in a high school that it is a “high school comedy.” This is adult subject matter approached with lacerating satire.

, iTunes, GooglePlay and/or other services. Availability may vary by service.
Election [DVD]