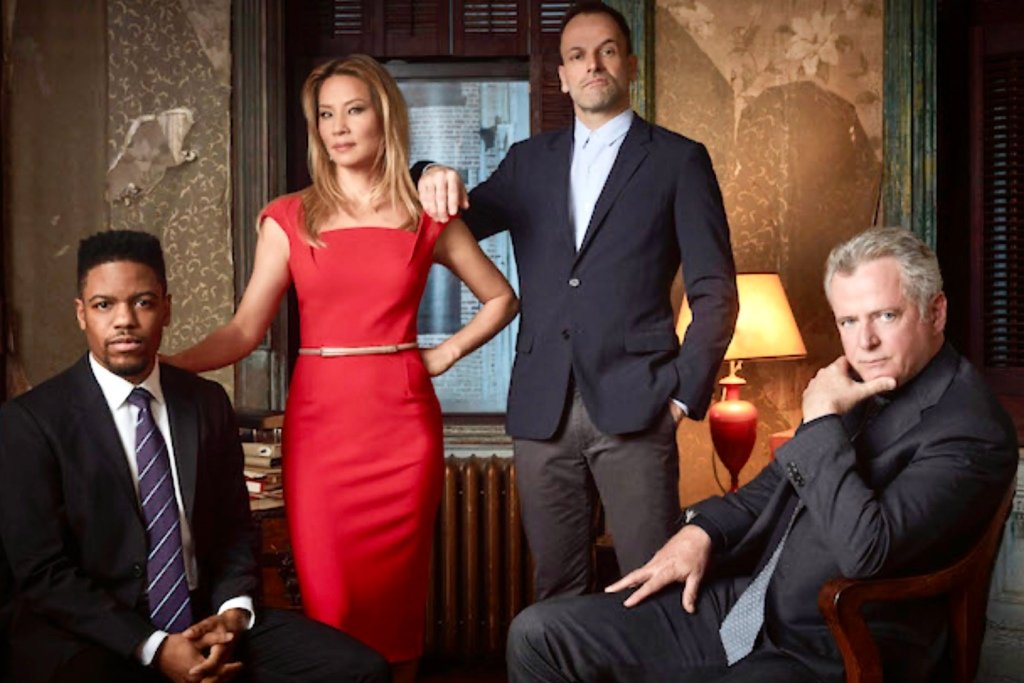 Elementary: Complete Series (2012-2019) was the second recent show to reimagine Sherlock Holmes for the 21st century. The first, Sherlock, was created for BBC by Doctor Who collaborators Steven Moffat and Mark Gatiss and starred Benedict Cumberbatch as a thoroughly arrogant and actively rude Holmes and Martin Freeman as roommate, chronicler, and finally partner Dr. Watson.

This version, developed and produced for CBS creator / showrunner Robert Doherty, stars Jonny Lee Miller as Sherlock, a genius and recovering drug addict who moves to New York after rehab, and Lucy Liu as Dr. Joan Watson, a former surgeon turned sober companion hired by Holmes’ father (unseen for the first three seasons) to watch over Sherlock during his transition back to society. As she accompanies him to crime scenes, she discovers a knack for observation and deduction and ends up his student and then his partner consulting on cases for the NYPD.

This Holmes is slightly less abrasive than Cumberbatch’s (at least in the initial seasons) and no less brilliant, and he too plays the misanthrope to keep people at a distance, a theme that comes full circle as the series brings the legacy of both Irene Adler (Natalie Dormer, Game of Thrones) and criminal mastermind Moriarty into Sherlock’s New York orbit. To say more about them would spoil the intelligent reimagining of the Holmes canon.

The show started well but really gelled over the season as Miller brought out the dimensions inherent in the character, Liu carved out a new take on Watson as a medical professional who discovers that she likes detective work, and the two of them created a friendship and partnership out of these two disparate characters. And despite Holmes’ protests, the ghost of addiction (and the accompanying feelings of guilt, shame, and desire) hangs over many of the episodes.

Jon Michael Hill costars as Detective Marcus Bell, the one officer who works well with the pair and becomes a trusted partner. (His name pays tribute to Dr. Joseph Bell, the medical school mentor of author Arthur Conan Doyle.) Aidan Quinn also stands out as the New York police captain who understands both Holmes’ abilities and limitations, and the show very nicely explores their mutual (and sometimes wary) respect. And Ato Essandoh makes his first appearance as Sherlock’s NA sponsor Alfredo Llamosa, an ex-con turned car security expert who develops into an advisor, ally, and finally friend. The series ended up the top-rated new drama of the 2012-2013 TV season.

Season Two brings more of the characters from the Holmes canon into the show, notably his estranged brother Mycroft (Rhys Ifans), in this version a restaurateur with shady connections, and former London police detective Lestrade (Sean Pertwee), here a rather pathetic fellow with an addiction for attention but little talent as a detective without Holmes pointing the way. Both characters appear in the two-part season opener, which brings Holmes back to London, and end up coming to New York before the season is over. The season also introduces a new character original to this show: medical examiner Dr. Eugene Hawes (Jordan Gelber), one of the few members of the department who earns Holmes’ respect and friendship. Their monthly chess matches are one of Sherlock’s only social activities. Even more interesting, however, is the way Holmes faces the consequences of his arrogance when it gets a friend and colleague hurt, and ends with Holmes leaving New York to work with British Intelligence.

Season Three opens with Joan Watson running her own successful detective practice and in a serious romantic relationship when Sherlock abruptly returns with a new protégé: Kitty (Ophelia Lovibond), a young woman with her own demons. The separation of Holmes and Watson is temporary, however, and the familiar team is back together by the season’s halfway point. Just as importantly, Holmes faces his past and his addiction directly when a case in the final episodes brings back faces from his days as a heroin addict.

The events of third season finale shape the opening of Season Four as Sherlock recovers from a relapse and his struggle with losing the control he values and Watson tries to help him repair relations with the NYPD, which has lost trust in him. But along with the cases, both as police consultants and private investigators, they face a new challenge: Sherlock’s estranged father Morland (John Noble, superb casting as the emotionally distant power broker) arrives, ostensibly to reconnect with his brilliant but troubled son. A powerful businessman with international connections, Morland uses his influence to have Sherlock reinstated with the police, which only raises Sherlock’s suspicions of his father motives, which Joan begins to share as well.

Along with the family drama of Morland, who has been targeted by an international criminal organization, this season features an adaptation of The Hound of the Baskervilles updated with modern technology, and a romantic relationship for Sherlock, a brilliant programmer (Betty Gilpin, GLOW) on the autism spectrum that makes it difficult to interact socially. It’s an issue Sherlock understands all too well and his tentative courtship (his first since the series began) is nicely handled.

In Season Five, Joan takes on her own protégé, a former convict named Shinwell Johnson (Nelsan Ellis, True Blood) who goes undercover in a violent street gang in an act of redemption for past crimes. Virginia Madsen guest stars in two episodes as the girlfriend of the recently-divorced Captain Gregson and Ophelia Lovibond returns as Kitty, Sherlock’s former protégé, with life-changing news. The show settles into kind of routine that is broken only in the surprises of the final episodes of the season but the mysteries are still engaging and often quite clever and the characters continue to be the show’s main draw.

The producers knew that the show was on bubble coming into Season Six and they developed it with the possibility that it could be the final season. Both Sherlock and Joan face a death in the family which prompts them to contemplate their complicated relationships. Meanwhile Holmes confronts a medical diagnosis that threatens his cognitive abilities and, by extension, his sobriety and finds support from a fellow recovering addict (Desmond Harrington) who turns out to have ulterior motives. Gregson also faces his own crisis when his daughter, also a police officer, is traumatized after a serial killer targets her best friend. It continues to delve into issues of addiction and treatment and explore the deepening friendship between Sherlock and Joan and there are return visits from Sherlock’s father Morland as Holmes struggles to resolve their troubled relationship. The season ends with a twist that both serves as a fitting farewell episode for the producers while leaving open the possibility of further seasons.

As it turned out, the show was brought back for one final, abbreviated season. Season Seven opens with Holmes and Watsonworking with Scotland Yard in London. But their banishment from America is short lived and soon they are back in the New York brownstone to help Detective Marcus Bell solve the attempted murder of Captain Gregson. The season also brings a new nemesis: tech billionaire Odin Reichenbach (James Frain), who uses his internet software and social media apps to profile potential criminals and recruits a team of activists to kill his suspects before they can act. A few recurring characters from previous seasons return for one last appearance and while no scripts are adapted directly from Arthur Conan Doyle’s original stories, the climax plays off of “The Final Problem,” where Holmes famously died fighting Moriarty at Reichenbach Falls (Doyle later revived character). It’s a satisfying ending to a clever take on a famous character, but otherwise the season offers a valedictory lap of the show for fans.

Elementary proved to be more interesting and more rewarding than Sherlock in the long run. Where Sherlock began as a playful, ingenious, stylistically adventurous take on reimagining the classic character and stories, it soon spiraled into absurd stories, ridiculously complicated plots, and overworked melodrama. Elementary follows a more conventional procedural format than Sherlock and Miller’s performance is more subdued and internalized than that of Cumberbatch, but he’s also more believably human and his eccentricities are bound up in his past and his character. It plays the long game as it charts the evolution of Holmes as he learns to cultivate friendships, it presents Watson as his equal, and it offers a deeper exploration of his personality and his emotional struggles and perceptive reinterpretations of the characters from the Sherlock Holmes stories.

Also on DVD and on SVOD through Amazon Video, iTunes, GooglePlay, Fandango, Vudu and/or other services. Availability may vary by service.
Elementary: The Complete Series [DVD]