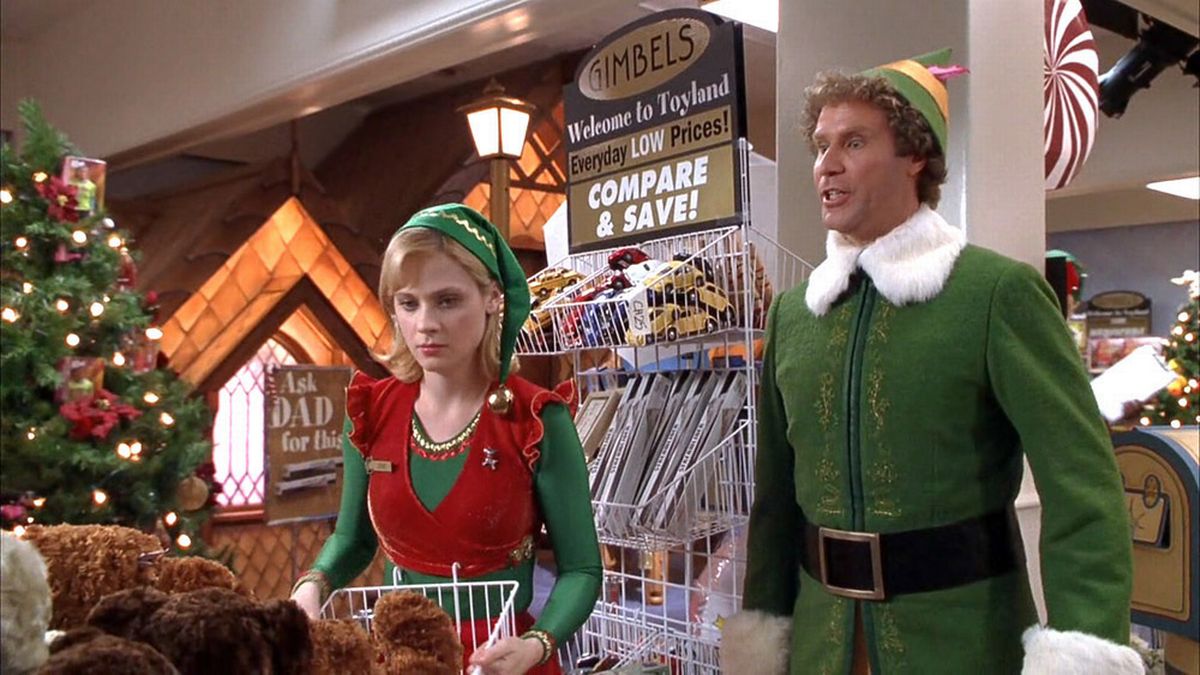 Forget storybook land. In Elf (2003), Buddy, a human orphan raised as an elf in Santa’s workshop, grows up in the land of Rankin-Bass Christmas TV Specials.

Will Ferrell is an endearingly child-like as Buddy, an eager, excitable innocent and an ungainly giant in a land of happy smiling little people. He’s also unfailingly trusting and it takes a while before his diminutive elf papa (Bob Newhart) finally confirms what the rest of elfdom already figured out: he was an inadvertent infant stowaway on Santa’s sleigh. So Buddy leaves his North Pole home of sugar plum diets and phony snow to find his biological father (James Caan as a cynical publisher on Santa’s naughty list) in New York City.

Buddy doesn’t stand out on the crowded sidewalks because of his costume—curly shoes, pointy cap, and forest green vest over yellow tights may not be standard dress, but it doesn’t earn any sideways glances in the crowds and it’s practically a walking resume for a job in a department store—but because of his demeanor. He marches through the world with an eternal smile and eyes like saucers in wonderment, and finds joy singing made up songs and spreading Christmas cheer to the urban hardcases. He even lights up the gloomy coworker in the toy department (Zooey Deschanel) and takes his first steps in human romance with a few dating tips from his younger and wiser adolescent half-brother.

Director Jon Favreau may not have comic grace, but his direction is both sweet and funny. He never lets Ferrell play the victim and refuses to stoop to rude, scatological humor, while Ferrell (in his first leading role) peppers every scene with manic outbursts and joyous exclamations. With his innocent sense of wonder warming the film, Elf genuinely embraces its message of holiday cheer and still has fun goofing with it.

It’s now embraced as a modern Christmas classic and regular viewing for many families over the holiday season.

Also on Blu-ray and DVD and on SVOD through Amazon Video, iTunes, GooglePlay, Fandango, Vudu and/or other services. Availability may vary by service.
Elf [Blu-ray]
Elf [DVD]

The Blu-ray and two-disc special edition DVD releases include two commentary tracks (one by director Jon Favreau, the other by star Will Ferrell), a bunch of featurettes, deleted and alternate scenes, and Elf Karaoke.