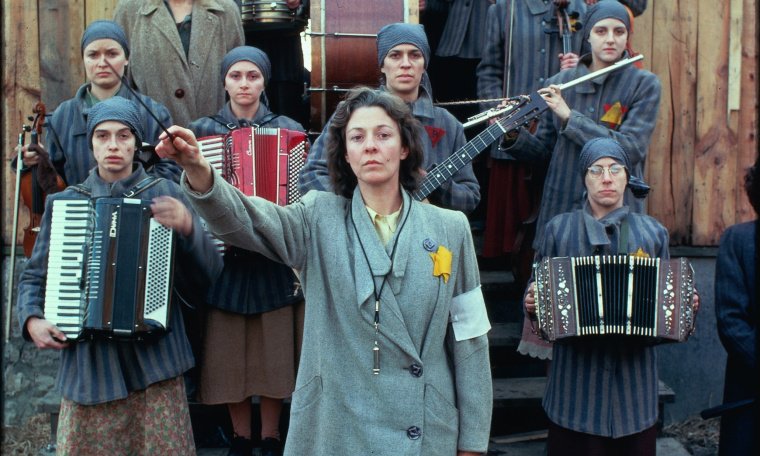 Playing for Time (1980), based on the memoir by Holocaust survivor Fania Fénelon and scripted for television by Arthur Miller, arrived a couple years after the excellent 1978 mini-series Holocaust to present a far more intimate drama and one of the most powerful TV events of its era.

Vanessa Redgrave was a controversial choice to play the French nightclub singer in Auschwitz (this was a few years after her notorious pro-PLO speech at the Oscars) but her performance is a triumph of dignity and desperation, strength and weakness, resolve and guilt, as she sings for her survival as a member of a makeshift women’s orchestra made up of prisoners. The scene where Fania is brought in from the barracks to “audition” for the orchestra with a song from “Madame Butterfly” presents the simple but profound contradictions that run through the entire film. Weak and frail from the work details and starvation rations, Fania tentatively picks out the melody on a grand piano glaringly out of place in this anonymous building filled with reflexively obedient women. As her voice comes in clear and full of ache and emotion, their heads (all instinctively lowered, so as not to make eye contact with the German officer in the room) slowly rise, and their eyes open, awestruck and moved beyond their expectations by this beauty cutting through the horror of their circumstances for a brief moment.

A place in the orchestra is reprieve from the worst of the deprivations and brutality—and, most importantly, from the gas chambers—and it comes at a price. They play for the prisoners as they are marched to their deaths and for the camp officers in concerts organized by Frau Lagerfuhrerin Maria Mandel (Shirley Knight), a would-be aesthete in charge of the women’s barracks. “I prefer to think I’m saving my life and not trying to please the SS,” insists Fania to the orchestra’s taskmaster of a conductor Alma Rose (Jane Alexander), the niece of Gustav Mahler and an artist raised as a crisply professional German perfectionist. She answers simply, “Do you think you can do one without the other?” Is the why as important as the what one will do to survive a nightmare? Can you even separate them? Alma sees striving to create art the highest form of existence, no matter who the audience. But she also realizes that the orchestra is all that protects them from the gas chambers and it’s a tenuous reprieve that exists at the whim of ranking SS Officer Joseph Mengele (Max Wright).

Apart from sketches of the war outside the fences (presented in newsreel footage), the film focuses on the experience Fania from her cattle car journey to Auschwitz to the deprivations and ordeals in the camp through to liberation, and we are limited to what she sees and hears and experiences. It’s a gray, colorless world and all they know of what’s outside the wire comes via whispered rumors or the sounds of airplanes and bombs buzzing around them, heard but almost never seen. The small scale production keeps us largely within the barracks and avoids the graphic depictions presented in Holocaust and The Winds of War—the dead are suggested by small columns of women marched past the band and out of site, or in the piles of confiscated eyeglasses and other personal objects, and the deprivations in the sores and bruises on the sallow faces—but the intimacy of the production offers a harrowing portrait all its own.

Daniel Mann keeps the camera with Fania and scales the film to the characters and the group dynamics, whether it’s twenty characters in a room or two. In the most intimate scene, we watch Fania’s ideals and resolve struggle with her hunger and desperation when she’s offered food by Marianne (Melanie Mayron), the young woman she adopts on the train to the camp and watches (not without judgment) as she sacrifices all dignity and self-respect to sell her body to the guards in exchange for food. Marianne drops a potato on the desk where Fania toils over an orchestration, but her show of resolve—her lesson in how will can overcome hunger—crumbles when Marianne leaves and Fania (tentatively at first) reaches for the food, smells it, nibbles and finally eats, crying over how easily she weakened in the face of hunger. How can she judge Marianne when she too can give in so easily?

Miller’s screenplay, while designed to give voice to a breadth of experience and perspective through at times contrived debates within the barracks, delicately and painfully explores the emotional as well as the physical terrors of the camp. But just as importantly it reminds us that their individual sense of identity has little to do with the Nazi stamps on their uniforms. Alexander’s unforgiving perfectionist of a conductor defines herself as a German, not a Jew, no matter what the badge of her camp uniform brands her. The Jews distance themselves from the Poles, who may be fellow prisoners but are Christians. Even as the musicians receive better treatment than the general camp population due to their position, some of them resent that others are offered preferred status due to their ethnicity. One Jewish woman identifies herself as a Communist, first and foremost, another is a Zionist, and they argue morality as if they were in a position to actually act upon their convictions. But ultimately it is Fania’s struggle that frames the film with the question that defies answer: how can one human do this to another?

Free with ads on IMDbTV and The Roku Channel or free on Hoopla, which is free through most public and college library systems.

, iTunes, GooglePlay and/or other services. Availability may vary by service.
Playing for Time [Blu-ray]

The DVD looks fine but not stellar, though the grim gray palette is served just fine with this edition. It’s presented at the original TV 1.33:1 aspect ratio with a mono soundtrack. No supplements.