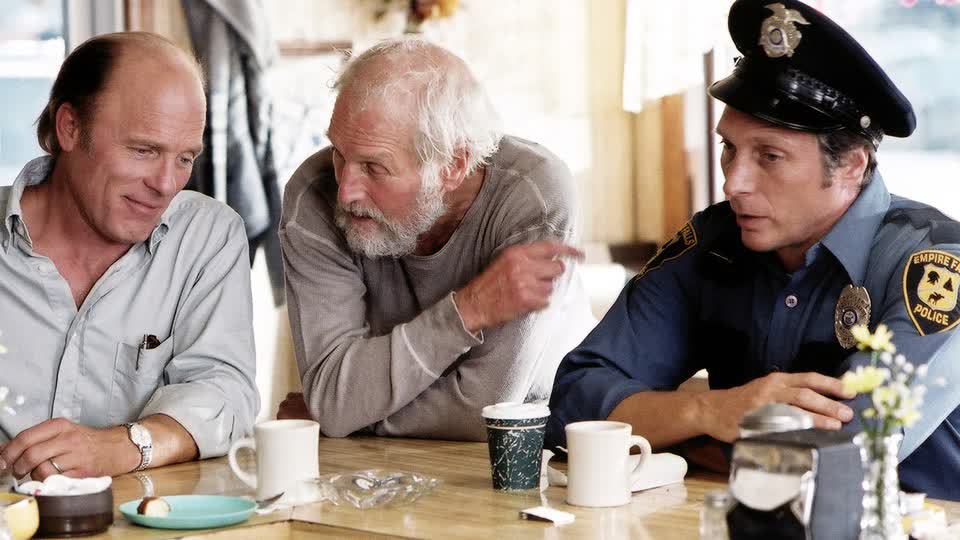 Empire Falls (2005) – Paul Newman found one of the great roles of his career in the Robert Benton’s film of Richard Russo’s Nobody’s Fool (1994), playing a gently reckless cock-up of a father who gets an unexpected second chance to help his son. So it’s no surprise that he jumped at the chance to bring Russo’s Pulitzer Prize-winning novel Empire Falls to the screen (the small screen), even if the part for him—another eccentric, deadbeat Dad, this one even more grizzled and conniving—is a minor color in a rich mosaic of personalities.

The story is another of Russo’s explorations of once prosperous industry town in Maine and the people left behind, even trapped within the confines of its small world, this one revolving around the Roby family. Miles (Ed Harris) is the manager and fry cook at the town’s struggling grill, divorced (from Helen Hunt, on an energetic campaign of self-improvement since the break-up), dealing with a coot of a father (Newman) who constantly drifts into his life looking for handouts, and focused solely on the welfare of his artistically inspired daughter, Tick (Danielle Panabaker).

Russo adapts his own novel for the HBO mini-series, which is essentially a four-hour film spread over two parts, and the format gives him the room to let the story and its characters live and breathe. Flashbacks fill in past events that shape the present and a gentle authorial narration (by Larry Pine) fills in details, but you get an even richer personal history from the conversations and the relationships, both easy and awkward. Joanne Woodward is a velvet hammer as the rich widow who pulls the emotional strings and expects everyone to dance, Philip Seymour Hoffman and Robin Wright Penn are touching in the flashback scenes, and Aidan Quinn, Dennis Farina, William Fichtner, Estelle Parsons, Theresa Russell, and Kate Burton are all excellent under the direction of Fred Schepisi, who brings the same warm empathy to the characters and their dramas (some of them quite harrowing) as Russo does in the novel.