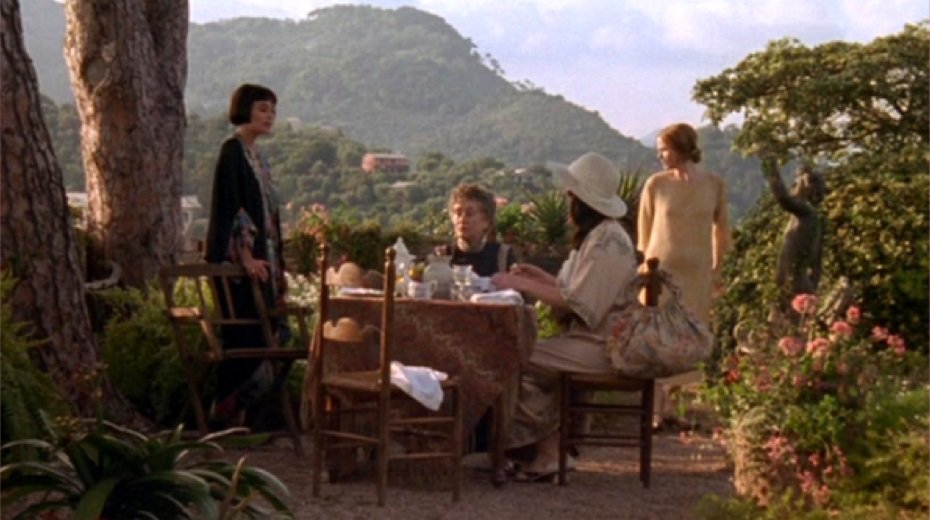 Enchanted April (1991) – Josie Lawrence and Miranda Richardson are the two quietly miserable middle class wives who impulsively (and passionately) decide to escape their dreary world in post-World War I London and their distracted, pompous husbands and rent a castle on the Italian coast. When they wake up in their villa after a rainy nighttime arrival (Britain still seems to follow them like a cloud), they open their windows to a sunny spring morning on the Italian coast, the hills exploding in flowers and foliage, the Mediterranean waters a captivating azure catching the sun with white accents.

It’s a fairy tale awakening for them in every way. “It’s this place,” says Lawrence’s newly recharged character, and she’s right: it intoxicates everyone who arrives, from their roommates and partners in the enterprise, the privileged socialite Lady Caroline Dester (Polly Walker) escaping the “grabbing hands” of the men in her society circles and the officious matron Mrs. Fisher (Joan Plowright), who makes it her business to keep strict schedules and maintain the social equilibrium and propriety but soon gives in to the freedom and the energy of this world. That phrase,  “It’s this place,” is usually code for some kind of infection of evil in a horror film, but here it’s all about the magic of a magnificent piece of heaven on Earth, which refreshes and heals, lifting the emotional baggage and allowing for fresh starts.

The film slips into internal monologues to tell us about the transformations the characters are going through and they seem so unnecessary so much of the time, mostly because the observations are already so apparent to the eye. That’s thanks in large part to director Mike Newell, especially when it comes to exploring the effect of the Italian getaway on Lottie and Rose, the buttoned-up, dutifully miserable British housewives who let their hair down (literally – the careful pulled-back hairdos become the flowing tresses of Earth Mothers rediscovering themselves) and become one with the world. For Lottie, Josie Lawrence wanders the woods, her hands out to feel the grass and the leaves and the foliage as she passes by, her smile a gentle but radiant expression of bliss. Her unleashed joy brings out the beauty that has been locked up in her unhappiness.

In the case of Rose, Newell shoots her not a visitor to the landscape but a part of it. Miranda Richardson doesn’t merely commune with nature, she nestles in the grass or stretches out on the rocks like a child in the comforting arms of a parent or a lover sleeping in the arms of her love. When she floats in the shallow waters, her hands stroke and grab the sea grass with an almost erotic intensity. It’s not to say she’s making love to this corner of the Earth (though it wouldn’t be far off the mark) as she’s escaping into its warm bosom and trying to merge with it.

If Lottie is the Earth Mother, Rose is the wood nymph attempting to escape the repressed instincts of her socially conditioned body. It’s almost disappointing when the husbands arrive and the old romances are recharged and relationships rekindled with newfound respect and affection, if not for the commitment and compassion and generosity of Newell’s direction. It’s not about escape or rebirth, it’s about renewal and appreciation, with all the restraint we’ve come to expect in the oh-so-British manner of period movies, but behind that precious romanticism is a genuine commitment to this emotional renewal.

It’s adapted from the novel by Elizabeth von Arnim. Alfred Molina, Jim Broadbent and Michael Kitchen costar as the men in their lives.

On DVD from Lionsgate, with commentary by director Mike Newell and producer Ann Scott. It was shot for British DVD but picked up by Miramax for American distribution and shown in theaters. The film, shot on 16mm in the squarish TV format, looks fine in the 16×9 format and the 16mm grain and color add to the organic feeling of the scenes in Italy. It’s lush but also earthy, particularly defined by the greens and browns of the springtime.